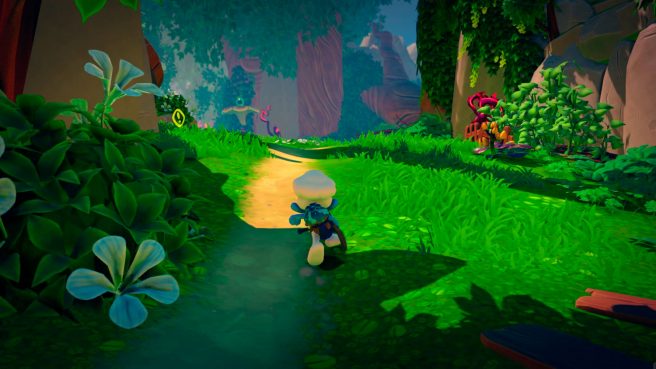 The Smurfs: Mission Vileaf has been delayed. Originally planned for October 25, the game will now release next month. It’s specifically planned for November 5 in Europe, November 16 in North America, and November 20 in Australia / New Zealand. Publisher Microids did not provide a reason for the delay.

The Smurfs: Mission Vileaf will be sold physically and digitally on Switch. Furthermore, a collector’s edition will be available at retail, and it sounds like this will only be offered on Nintendo’s console now.

In his dark laboratory, the evil wizard Gargamel has discovered a formula allowing him to create a wicked plant, called Vileaf. This plant produces “Viletrap” seeds, which can attract Smurfs and imprison them in vegetal traps! But these Viletrap plants are also a great danger for the forest, as they are highly toxic, especially for the sarsaparilla fields!

In order to fix this dreadful situation, Papa Smurf decided to ask some of his fellow Smurfs to help him find the ingredients for an antidote powerful enough to eradicate the Vileaf once and for all and heal the plants afflicted by this curse. An ace Smurf team, featuring Hefty, Smurfette, Brainy and Chef, goes on an adventure to complete this mission. All of these 4 characters are playable over the course of the game.

In order to help them in their quest, our heroes can rely upon a very handy tool, the Smurfizer, a revolutionary invention from Handy Smurf. The Smurfizer allows the Smurfs to get rid of the foes they encounter, as well as heal the plants afflicted by the Vileaf. This special gear will facilitate our heroes’ exploration journey across the game’s different environments, whether it be in the forest, the swamps or even in the most dangerous place of all: Gargamel’s laboratory!