Posted on April 1, 2016 by Patrick(@Patricklous) in Features, General Nintendo, Random 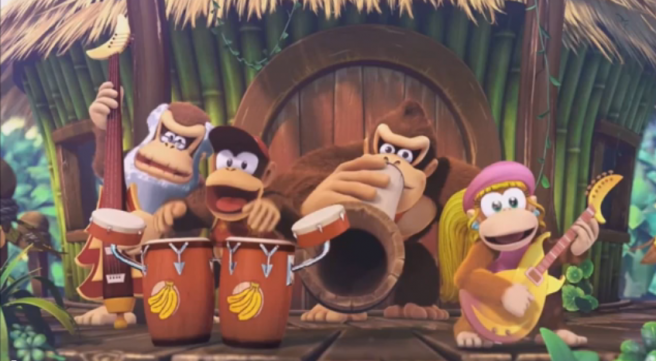 No April Fools’ Day news story from us, but we do have something that fits in with the festivities…

The Donkey Kong Country series is well known for the high quality of its music. With the atmospheric score of David Wise, the quirky tunes of Eveline Fischer and the unforgettable melodies of that other guy, it’s a franchise full of famous songs. So with that in mind, it’s worth highlighting the finest tracks that formed the soundtrack to our childhoods. Here are ten of the best tracks inspired by the hit video game:

This funky tune from Donkey Kong Country’s second season takes place during a homage to “It’s a Wonderful Life” where Donkey Kong has willed himself out of existence. After discovering that his family on Kongo Bongo Island does need him and that Diddy Kong is literally Hitler, Donkey belts out a desperate musical plea to Eddie the Guardian Angel Yeti. Throughout the episode we see Donkey Kong pushed to breaking point – the mere prospect of going for snowcones is the catalyst that sets off this toe-tapping number. It’s a creative musical portrayal of it’s star’s mental state; lyrics like I can’t believe what I see/everything’s upside down and it makes no sense to me perfectly capture Donkey’s confused state and struggle to digest the alternate reality he is presented with.

This smooth groove flips gender roles on their heads as Diddy Kong delivers a musical explanation on why when women say “yes” they “actually mean “no” and vice versa. That sounds like horrible advice, but who am I to question a MRA (Monkey’s Rights Activist). As Donkey’s role in his relationship with Candy Kong is called in to question, he joins the song, providing a nice harmony for Diddy. Though the sparse backdrops reflect the budgetary cuts of the second season, Donkey Kong’s performance gives a nice insight into his tense relationship and confused perception of marriage in simian society. Diddy claims that it should be rather obvious but is it really? Does yes mean yes? is this coffee hot or cold? I don’t even know any more.

Much like the previous song, this Donkey/Diddy duet deals with the muddled nature of modern society, in this case serving as a dark indictment on our technologically-obsessed lives. Upon awakening in an iron-clad robotic body, the Kongs muse on Donkey’s foriegn appearance through a slick electronic piece that compensates for a weak vocal performance by one Diddy Kong. Of particular note is the outro, which is a clear homage to Daft Punk’s Around the World. Donkey’s repeated affirmation of I’m a Metal Head merges with the hypnotic visuals to create a cruel call that highlights the empty, cyclical nature of our own existence. Perhaps we all have our heads so far in our bleepbloops and radpads that we even realise we look like solar-powered, turbo-charged washing machines. Alternatively, this composition can be interpreted as Donkey Kong embracing his newfound artificial exterior. Though his voice lacks the usual warm tone thanks to the modulation, Donkey poses the question I’ve never felt better… can’t you see nothing’s changed? Is our obsession with electronics really a problem? These are the deep questions posed by Donkey Kong Country.

Is this nostalgic tune memorable for the way it pays tribute to the shared memories of youth or fleshes out the backstory to Cranky and K. Rool? No, it’s memorable because of all the homoerotic undertones. Just look at the way the pair gaze at each other with lustful eyes: 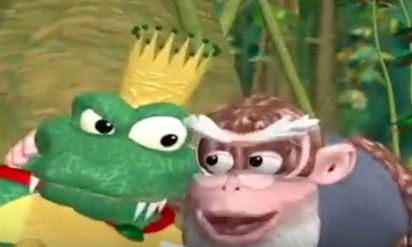 It’s made clearer than ever that, despite his harsh veneer, Cranky just wants to straddle a crocodile. This musical number takes the typically camp portrayal of the villainous King K. Rool and Crankys it up to eleven. The original French title of this episodes translates as “Intimate Enemies” and how intimidate indeed as the pair prance around. Alas, tragedy strikes and these lovers are destined to return to their eternal conflict. This “friendship” may be wrong, but it’s oh so right.

No-one reflects the human condition quite like an overweight crocodile with a southern accent. Like the games that spawned it, the Donkey Kong Country cartoon tends to focus on the Kong family, but there are rare instances where the typical antagonists have their moment in the limelight. This melancholy ballad fleshes out the tragic character of Klump, K. Rool’s loyal henchman who finds himself alone for the Kongo Bongo Festival of Lights. Rather than an uplifting festive tune, we see Klump confronting the crushing loneliness within himself as he sits teary-eyed at a piano like some kind of reptilian Elton John. Though the series professes to offer “family-friendly fun”, there are moments like these where it pulls at the heartstrings and reminds us that not everyone is lucky enough to have a family. A chorus of Kremlings lead the song to its emotional climax, only to fade out to the sound of Klump crying. It ends not with a bang, but with a whimpering crocodile.

Do James Dean and Mr. Bean exist within the confines of the Donkey Kong cinematic universe? Again, this show uses its musical numbers to pose deep questions.

#3 Do You Know What This Means

Benedict Campbell’s hammy performance as King K. Rool is one of the highlights of the Donkey Kong Country series, with plenty of evil schemes that turn into iconic musical numbers like Spellbound and No-one’s Going to Make a Monkey Out of Me. Do You Know What This Means begins in a similar fashion, with a victorious K. Rool setting the stage for a triumphant rock opera. It’s a show-stopping performance, but the real highlight is when Cranky Kong kicks in with some absolutely devastation delivery. The raw emotion in his line of why don’t you just rip my heart out makes the audience painfully aware of what this really means. K. Rool has his hands on the Crystal Coconut, that one glimmer of light left in Cranky’s cold simian heart. His whole existence is centered around protecting this mystical relic; it’s been stolen by his secret lover and what does he have left to live for? It’s a desparate plea that sets the wheels in motion for the final act of a killer episode.

Holograms might not be Cranky Kong first solo performance, but it’s perhaps his finest. This sudden musical outburst takes the form of an educational song in the vein of something by They Might Be Giants as a holographic Cranky explains the ups and downs of being a hologram. Driven by a funky synth bassline, Cranky explains some of the things holograms cannot do, such as combing hair, lifting things and eating bananas. Despite the restrictions of this holographic technology and the fact that you’re not really there, we see some advantages to Cranky’s ghostly state. In an earlier episode Cranky injured himself while dancing, but here we see the freedom allowed by this new technology as he busts out some hypnotic dance moves. Though Cranky decries his state, perhaps being a hologram has its perks as you truly can shake it anywhere. Through Holograms we come to an understanding as to both holograms’ inability to press big red buttons and Cranky’s conflicted feelings. It’s one of the best holographic performances out there – eat that, Hatsune Miku! Oh wait, you can’t. You’re a hologram.

Also taking place during Donkey Kong Country’s “It’s a Wonderful Life” episode, the counterpart to Let Me Go Back to My Home is truly the musical high point of the series. Like the film the episode draws inspiration from, we hear our protagonist in the midst of utter despair. Abandoned by his family and friends, what reason does he have to go on living? This existential angst can be clearly heard in Donkey Kong’s performance as he wanders the land singing the blues. It’s a stirring piece with a fantastic build-up to DK shouting why should I stay if they treat me that way to the heavens. As the show approached the end of its run, If I Wasn’t Around served as a fitting finale for the series. Of course, the world would be a much worse place if Donkey Kong wasn’t around and we were all denied of these musical masterpieces. Vivat simia! Ab aeterno hic venerit banana slamma!