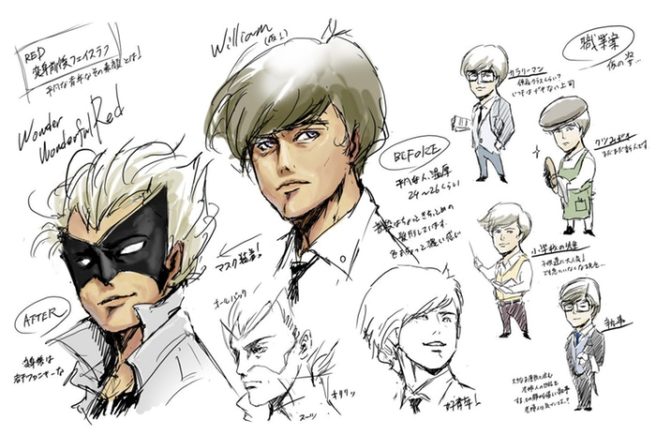 Director Hideki Kamiya posted a meaty update to the Kickstarter page for The Wonderful 101: Remastered. We get a look at some very interesting items from the game’s development, including the first draft of the design document, initial designs, and even prototype screenshots.

Here’s the full rundown from Kamiya:

Compared to other action games I’ve worked on in the past, such as Devil May Cry, Viewtiful Joe, and Bayonetta, The Wonderful 101 has a staggering amount of content – so much, in fact, that I have full confidence it can satisfy everyone even now, 6 long years after it was originally released. Today, in order to try and remember just how exactly this game came about, I rummaged through the contents of one of my old PC HDDs and found some documents and images that really bring back a lot of memories.

Here’s the first draft of the design document where The Wonderful 101 all began.

In this initial stage, I was fixated on the number 100 instead of 101. Then, towards the end of development, when we had to decide on the official title, the client said: “We’d like you to get a little more creative with the title. For example…what about adding one more to the number?” So I changed the number to 101, in order to signify the player themselves joining the roster, while also adding some extra flair to the script.

Opening the document, the first thing we see is the game overview. At this point, the game was labeled as a “crowd action” game. Wonder-Red’s name was already set in stone as well. Incidentally, I drew all the sketches you see here (LOL). There was no team to speak of at this point, so I had to draw all the necessary art as well as make the entire design document by myself.

This page talks about the main character. We ended up adjusting the details a bit, but the main idea stayed the same. The design you see here is just what I came up with off the top of my head. (LOL)

Here’s the “line action” page. It explains what the player can do with their team members. As you can see, the examples here were actually put into the game.

This page details the stage composition. I’d already imagined the POV to be “quarter view.” Here I thought up not just what enemies and gimmicks would be in the stage, but also how the player would progress through the world map.

Here, we finally reach one of the pillars of the game: Unite Morphs! At this stage, it was called “Unite Morphing.” I originally got the idea of having a group unite together and form one huge thing from the picture books “Swimmy” and “Kaibutsu ni Nacchatta” (I Became a Monster).

I always think up ideas as I create games, but I also often lose my way. In this case, I knew exactly what the core of the game would be right from the start, which is a rare case for me. (LOL)

Here you can see the initial designs for the team members. The mask shape looks a little different, but I pretty much knew how the design would look from the start.

Here’s a rough sketch of Red’s character design. I hadn’t decided on what day job he would take on to hide himself from the world, and was still experimenting with different ideas.

Here is the very first game screenshot, which was created as a prototype. At the time, I wasn’t even sure about what style of graphics we’d go with, so at first, they ended up as more of a classical comic book style. I wasn’t satisfied with it myself, and when the client saw this and said “Hmm. I dunno about these graphics…” I retorted with a bunch of excuses. (LOL)

In fact, we abandoned this graphical style right away, and came up with a new American comic-inspired design. These new graphics ended up in the final version of the game.

Here’s one last thing – a poster our designer created for fun. It was created to look like a movie poster, so the team thought up a catchphrase that we could use to express the atmosphere we were going for. Afterwards, we printed it out and hung it in a place where we could all see it.

The deformed character silhouettes are cute, but I feel that this poster really represents an “action should be hardcore and cool!” sentiment. This one is still a favorite of mine, even now.