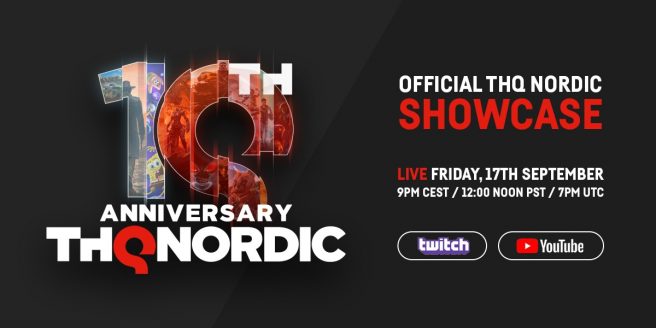 In celebration of THQ Nordic’s tenth anniversary, the company will be hosting a special digital showcase, and the live stream will be kicking off in just a bit. The event officially begins at 12 PM PT / 3 PM ET / 8 PM in the UK / 9 PM in Europe. Note that a pre-show is planned in which HandyGames will be showing off some of its upcoming titles.

As previously mentioned, The Game Awards executive producer and host Geoff Keighley will host the THQ Nordic event. It will cover “six new game announcements that will take you on a journey through time and space.” THQ Nordic has teased “the return of legendary franchises, including some for which fans have been waiting decades to get their hands on a new installment, and you can also expect to see sequels to beloved games.”

Here’s where you can watch the THQ Nordic digital showcase live stream:

THQ Nordic has supported Switch with numerous games over the years, though it’s unclear if the show will have anything for Nintendo fans. Regardless, we’ll keep an eye out for any notable news and if there’s anything to report, we’ll have it right here on the site.