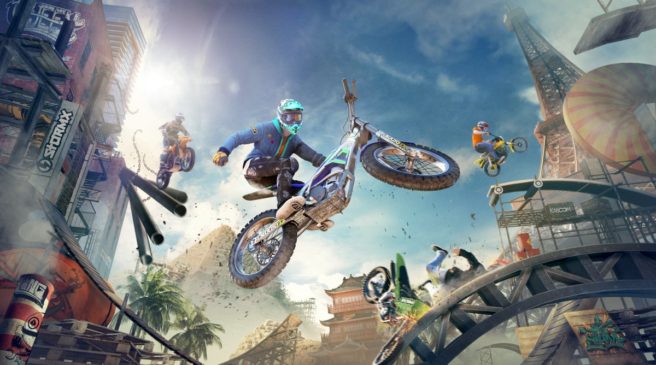 Trials Rising was previously on track to launch sometime in February 2019. Today, Ubisoft narrowed things down to a specific date: February 12.

Here’s a new Gamescom trailer and the full announcement:

Today, at Gamescom, Ubisoft announced Trials® Rising, the newest iteration of the gripping Trials motorcycle platform series, will be released worldwide on February 12, 2019, on PlayStation®4 computer entertainment system, the Xbox One family of devices including the Xbox One X, on Nintendo SwitchTM and Windows PC. Players selected to participate in the Closed Beta can try their hand at multiplayer competition from September 13 to September 16.

Digital pre-orders for the Standard and Gold Editions are now available. The Trials Rising Standard Edition includes the base game. The Trials Rising Gold Edition includes the base game and the Expansion Pass, with two major DLCs and much more, for 40€/$. Pre-order bonuses are the Jungle Rider Pack, in which players can go wild in a gorilla suit, and the Wild West Rider Pack, which features a cowboy outfit. Each pack includes five items for your rider and one item for your bike.

Set in new epic locations around the world and featuring over a hundred tracks, Trials Rising lets riders travel the world and put their skills to the test through various levels of difficulty, beat the competition, grow their fame under the eyes of experienced sponsors and work to become Trials champions. While enjoying the view of the Eiffel Tower or riding along the Great Wall of China, solo or in the hilarious Tandem Bike mode, riders won’t be able to resist the thrill of astonishing exploits and fails on their way.

The Trials franchise has always been about honing your skill and beating the competition, combined with fun and crazy moments with friends. Competition is brought to a new level in Trials Rising, as players will now receive instant notifications when a friend beats their score – so they can go and try to win the track back. Players will gain Fame through actions like completing tracks and Contracts, beating Challengers and competing against other players in multiplayer, all with the goal of becoming the Trials champion.

Each player will pursue their career in a League, a series of tracks to conquer before the Stadium Finals. New to Trials Rising, Stadium Finals is a big event that pits players against seven others in an elimination-style competition over three heats. The best riders unlock a new League to continue their journey.