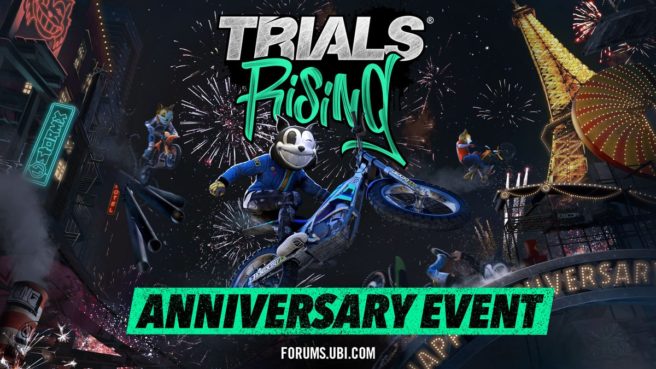 In other Trials Rising news, a new Anniversary Event kicks off tomorrow. Full details as to what’s in store are included below.

This Wednesday, February 26th Trials Rising turns 1 year old. To celebrate our first anniversary the Trials team has put together a special Anniversary Event that will take place starting on Wednesday and running through March 9th. This special event will come with some familiar goals as well as some new rewards, let’s see what’s in store.

It wouldn’t be a Trials Rising event without some hidden collectibles to search for. This time around players can seek out the Golden Redlynx Emblem hidden across 10 different tracks on the Trials Rising world map. Collect all 10 emblems to unlock the exclusive Golden Lynx Helmet variant.

*Note: This image does not represent an actual location of a collectible for the Anniversary Event

Like previous events, there will also be special event Gear Crates players can earn for level ups during the event. In addition to various items from the wide selection of customizations in Trials Rising, these crates could also include 4 new anniversary helmet accessories; Birthday Cake, Birthday Hat, Redlynx Snapback & Lynx Bobblehead.

From all of us on the Trials team, a big thank you for a thrilling year of eating dirt and tasting victory. To all riders and builders, beginners to ninjas, we’re so thankful you’ve chosen to spend some of your gaming time with us this year. Happy Anniversary!