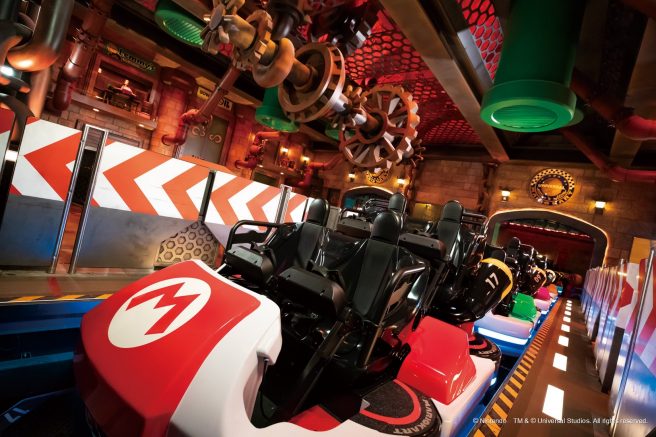 Universal Creative’s Thierry Coup and Tom Geraghty recently discussed adding AR to Super Nintendo World and why it made sense for the theme park. Read their comments in full below.

Tom: One of the few things that was the same was, we say, what are the key expectations of our guests? They want to punch a block; they want to drive a kart; they want to meet Mario and Peach; they want to eat at Kinopio’s Cafe. When people go to a theme park experience, there’s a few key notes you have to hit, to make sure that you entertain them in a way they expect, and then you have to delight them by going beyond that. What Thierry mentioned was absolutely the key, which is they come at it from a very similar place – what can the technology do? Can my creative go farther than that?

Miyamoto-san, he had bigger ideas than the Switch could deliver, so they had to pull back on his ideas. But then he challenged the tech guys to get there, and I think the same thing happened with the creative ideas and the technology [on Super Nintendo World]. Can we can we make the AR wider? Can we make the field of view deeper? So there’s the entire difference, which is the video game property in the deep, deep, deep interactivity, and there’s the basic – I think we designed one of the best theme park experiences ever, by keeping an eye on those key expectations.

It also has to be modular, because augmented reality isn’t going to last as long as most of our 15- to 20-year ride vehicle experiences. We know that [AR] is going to advance and come into your home, and we need to keep beating that, so we have plans to iterate the tech to support the creative that we may change, so that it can be like that.

Thierry: We thought AR would be the perfect technology for this. You want to be able to go through some of the incredible items in Mario Kart. You want to collect things; you want you want to see the characters fly at you, and certain things you could not do with with with stereo or 3D or any kind of other projection. It had to be AR, and we went and we looked at what was existing on the market. It wasn’t quite there.

We still did a test to prove to our senior leadership. We went to Cat in the Hat at Universal’s Islands of Adventure, and we strapped a pair of AR glasses on Mr. Tom Williams, our chairman, to show him what we intended to do, and he got it. He loved it. And in true fashion, he said go ahead and do it, knowing that it wasn’t quite ready. But he believed in us, and that’s what’s incredible about Universal.

Also related to Mario Kart: Koopa’s Challenge, the ride features drifting just like in the games. Coup and Geraghty spoke about this as well, stating:

Tom: Everybody has a steering wheel. Everybody has buttons to throw shells. That’s how you interact in the game. And we talked for years about, should I take a turn and I get to [steer], and how do I tell different riders it’s their turn, or should we all steer at the same time? Somewhere in the near design process, we came up with the steering game, so you get a signal that says you should turn left or you should turn right, and if everybody in the vehicle does it at the same time then it goes farther. There’s a pin in the vehicle on the track, and it’s a little bit off center so when everybody steers you can drift the ride vehicle. If you’re the only person steering then it drifts just for you, but if we’re all steering together we can make a drift a little bit more, but that was important thing for us I think to make that happen.

Thierry: Drifting is one of the iconic moves in the Mario Kart game, so you get extra points for drifting. If you drift correctly at the right time, you get rewarded in the Mario Kart ride, just like you would in the real game. It’s the feeling of going sideways in a turn, just the right angle, so you make that turn in a perfectly smooth progression. So we have that as part of the game in Mario Kart, just like you would have it in the video game.

Thierry: If you go to Mario Kart, he will tell you, if you if you throw a shell at a certain character at a certain time in the scene, you will get extra points. So there’s a lot more depth. As a first time player, you may not even get into that, but when you come back, if you’re an avid gamer, you’re going to really get into this as that allows you to get to the highest scores.

I think interactivity needs to be part of every future attraction. We want to make sure we engage our guests and that they participate even more actively into their experience and create their own journey, their own adventure. So I think that’s going to keep changing. This kind of sets the bar to a new level, and in the future we’re going to keep looking at developing as much interactivity as possible. And augmented reality, I think, will also be part of many attractions in the future.

Super Nintendo World opened at Universal Studios Japan last month following previous delays, though it is now temporarily closing due to a spike in coronavirus cases. There are plans for locations in the United States in Hollywood and Orlando, and Singapore will also be getting the theme park.