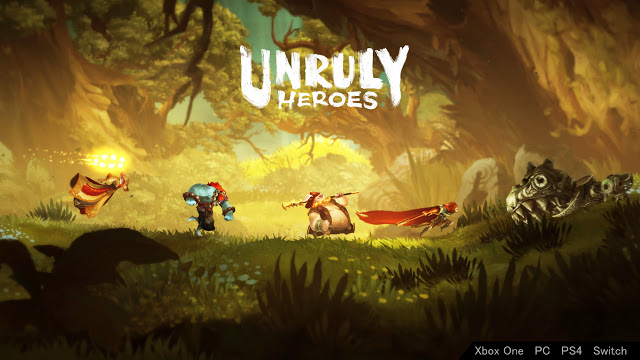 Magic Design Studios has released a first update for Unruly Heroes on Switch. With the initial patch, a bunch of bug fixes have been implemented.

1) Fix – Skull Canyon Level 01 – The camera remains locked if one of the players stays on the upper platform during the first fight with tiny wooden creatures.

2) Fix – GENERAL – Sandmonk missing animation during his ultimate – when the player uses the power up of Sandmonk and do a Y combo , it seems like 1 or 2 animations are missing during the combo.

3) Fix – Skull Canyon Level 05 – Music of the Captain Wolf arena will not stop – in coop (at least 2 players), if the players kill one big wolf and enter in it and kill the second big wolf with it , the music of the battle won’t stop and will be played during the rest of the level.

4) Fix – Taoist Temple Level 05 – Camera issue – in the last area of the level, near the scroll, when the player tries to reach it and passes a certain point the camera will go back and won’t show the correct place.

5) Fix – Flaming Mountain Level 02 – The collision of the broken bridge is still active – If the player goes near the middle of the bridge before it breaks, the player won’t fall down.

6) Fix – PVP – Missing hitting sound on Sandmonk – in PvP when the player attacks another player who plays as sandmonk a lots of attack won’t have any hitting sounds.

7) Fix – PVP – If a CPU is transformed in baby form while is in the air, the character will remain stuck.

13) Fix – Skull Canyon 02 – Camera is focusing the wrong player in the first Kihong statue puzzle – In the first puzzle using Kihong, if one player stays behind, the camera will focus the player behind instead of Kihong trying to fly up.

14) Fixed an issue preventing players to resolve a puzzle in the level “The Ascent” if the player was heavily backtracking after reaching a checkpoint (a Wukong statue was missing).

15) Fixed an issue preventing songs to be played through levels (songs were missing from “The Ascent”; “Fiery Flight” and “Belly of the Beast”).

17) PVP- Fixed an issue displaying the wrong portrait of a character on the UI.

18) PVP- Fixed an issue preventing settings to be applied in PVP Online mode.

19) PVP – Fixed an issue preventing the game to display “P2” above players’ character.

20) Fixed an issue preventing the fan to spawn in “The iron fan” level.

21) Fixed an issue preventing the player to use some input in the level selector screen.

22) Fixed an issue where the players can loses all their inputs if they do some specifics actions.