Untitled Goose Game devs on decision to feature a goose, the “to do” lists, name, and more 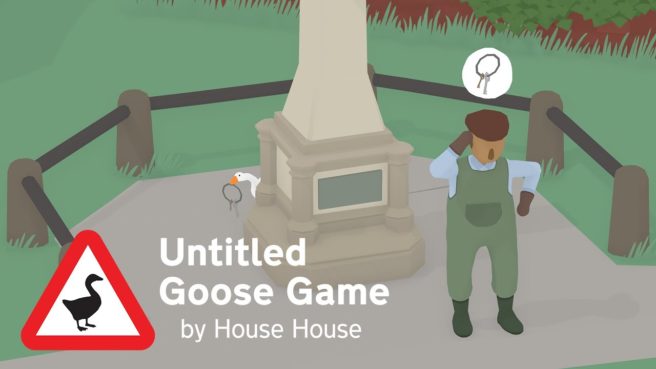 Nintendo shared a new interview this week with Untitled Goose Game developers Jake Strasser and Nico Disseldorp. During the discussion, the two talked about why they decided to feature a goose, how the “to do” lists gameplay mechanic came to be, the name, and more.

If someone hadn’t heard about this game before, how would you describe it?

Nico: Simply out, it’s a lovely day in the village, and you are a horrible goose. That’s our tagline and it pretty much sums everything up. It’s a game where you get to be a horrible goose – you can do things that geese do like waddle and honk. There are also people around and you can ruin their day.

So the obvious question… why a goose?

N: So, that was the first thing we had (laughs). It wasn’t “oh let’s make an animal stealth game,” it was more like “oh, let’s make a game about a goose.” It’s a very funny animal.

Fair enough (laughs). How did the gameplay evolve from that concept?

Jake: We had this vision of an English town and a goose coming in and ruining it all. That was the thing that made us laugh, and then we tried to work towards making that happen. And then we ended up with what we [now] have.

N: Yeah, we just kept making jokes about what a goose would do in a game. Then, after a while, we were like, “Oh, this is too good. We’re going to actually have to make this game now.”

So the “to do” lists that you complete in the game just naturally came from those jokes?

N: Yep. We also watched [British] children’s television. They have these shows that have low-key bad things happen in relatable ways – like a groundskeeper who’s having trouble with the spinkler system. We filled up our park with all these little scenarios that could happen, and then figured that giving the player a “to do” list would be a good way for them to find all the little things we put in.

What was your favorite thing about designing this game?

N: I just like trying to make everyone in the office laugh. You know you’re on to something when you go, “Everyone, everyone – turn around and look at what I’m about to do!” And everyone starts laughing.

J: Hmmm, for me, it was when we were making the goose. I made it so the goose would look at stuff that was around it… and, for me, it suddenly just breathed life into this thing. The animal felt like it was something separate to you as a player, and that it kind of had its own agenda. It was pretty magical – it just made everything else funnier.

How did you guys get into game development?

J: The four of us started working together as an excuse to spend time together. We made the prototype Push Me Pull You over one summer for one of our friends to play, and when they had a good time, we shared it online. Then even more people saw it, and played it, and had a good time. So, we just kept working on it! After six years and two games released it still feels like I’m just doing this to hang out and work with my best friends.

N: Yeah, we spend a lot of time playing games together, and this was the next logical step.

Last question: Where did the title “Untitled Goose Game” come from?

N: Oh. well, it’s because we couldn’t come up with a better name (laughs).

Untitled Goose Game is out now on the Switch eShop. It has been a top seller since its release a few weeks ago.