Valve on Switch and Steam Deck comparisons, says they were designed around differing philosophies 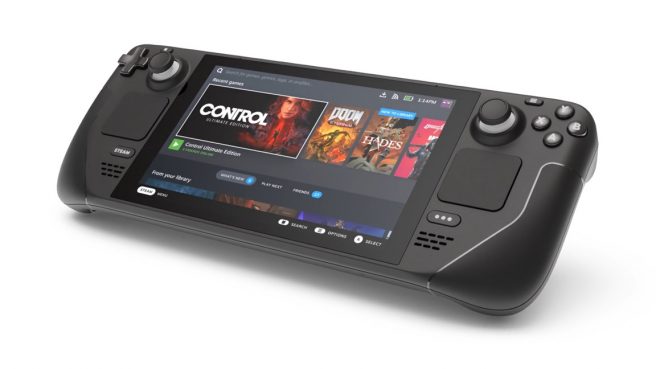 Last week, Valve unveiled its new Steam Deck system. The device has drawn plenty of comparisons to Switch since it’s capable of playing big games on the go (with docking support as well) and in some ways reminds gamers of Nintendo’s console from a design standpoint.

Valve itself has now commented on those comparisons. Designer Greg Coomer is the first to weigh in, telling IGN that Switch a “great device,” but feels the company is targeting a different audience.

“We tried to make all the decisions really in Steam Deck that targeted that audience and that served the customers that were already having a good time interacting with the games that are on that platform, on our platform. That really was how we were making our decisions. We’ve ended up with a device that cosmetically shares some traits with a Switch, but that just was… it’s kind of an artifact of how we’ve proceeded down the design direction.”

That’s not all from Valve – co-founder Gabe Newell chimed in as well, who indicated that Switch and Steam Deck were designed around differing philosophies.

“So I think Nintendo does a great job targeting the audience they do with the content that they have. And that’s going to be different. Like when you pick this up, it feels much more like the ergonomics for somebody who’s used to playing with an expensive game controller, right? Because it’s bigger and it’s bulkier than a Switch. And if we’re right, that’s the right trade-off to be making for the audience that we’re going after. [O]bviously, I mean, I think they’ve sold 85 million Switches.”

Switch has been around since the start of 2017 and will have its latest model, the OLED version, this October. Valve is planning to release the Steam Deck in December.