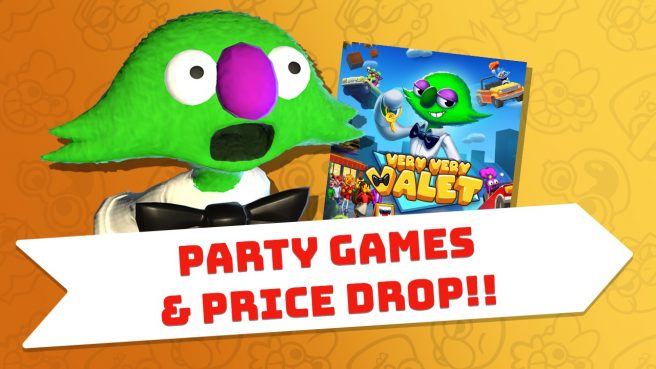 A year after launch, Very Very Valet has received a major 2.0 update.

The madcap couch co-op party game has been given a new Valet, 8 Player Party Games, a Boost mechanic, and more. The typical adjustments, improvements, and fixes are also included.

Continue on below for the full patch notes pertaining to the Very Very Valet version 2.0 update. 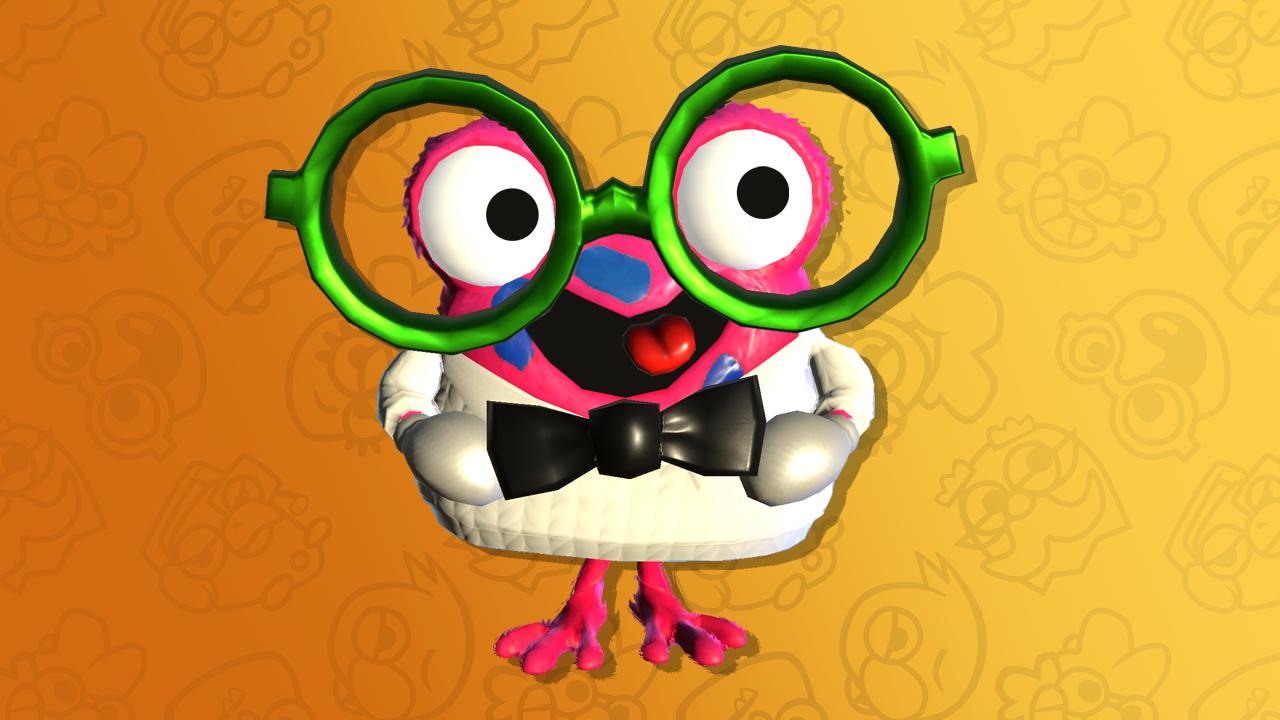 Give a warm welcome to the latest (and sweatiest) Valet to the team — codenamed “Flop”
Flop was actually the number one student at the Valet Academy! But they always thought of themselves as more of a “behind the desk” kind of agent rather than the “AHH WHY AM I DRIVING MY LEGS AREN’T LONG ENOUGH?!?” type. Life is full of surprises!

But then we showed Flop the fine print…so they’re donning their softest sweater and hoping to overcome their Alp-sized nerves to pickup, park, and return with the very very best! 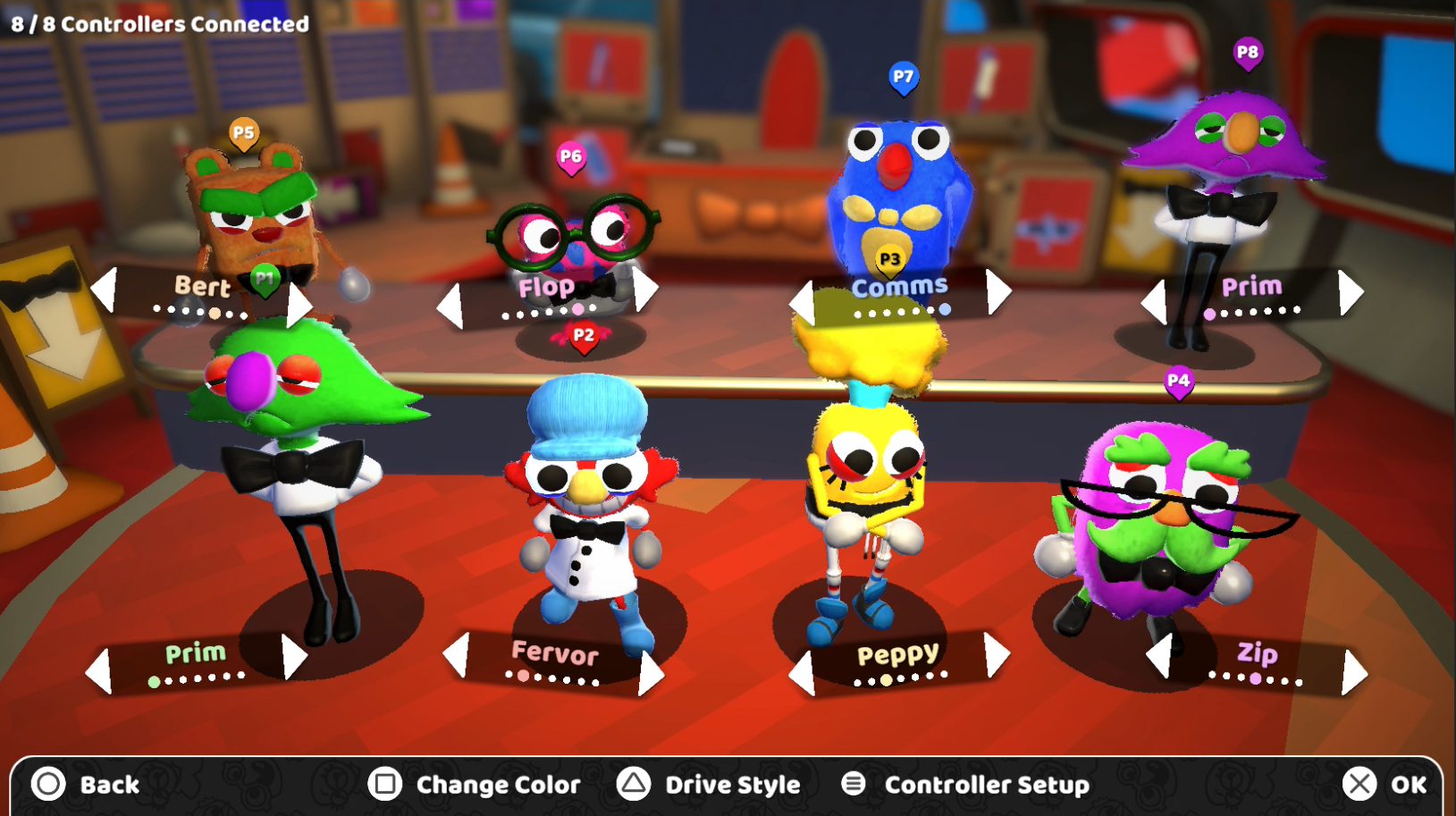 The rumors are true – we’ve got new Party Games that support up to 8 Players! You better hold onto your butts because it’s about to get very VERY chaotic. Version 2.0 has two different Party Games available: 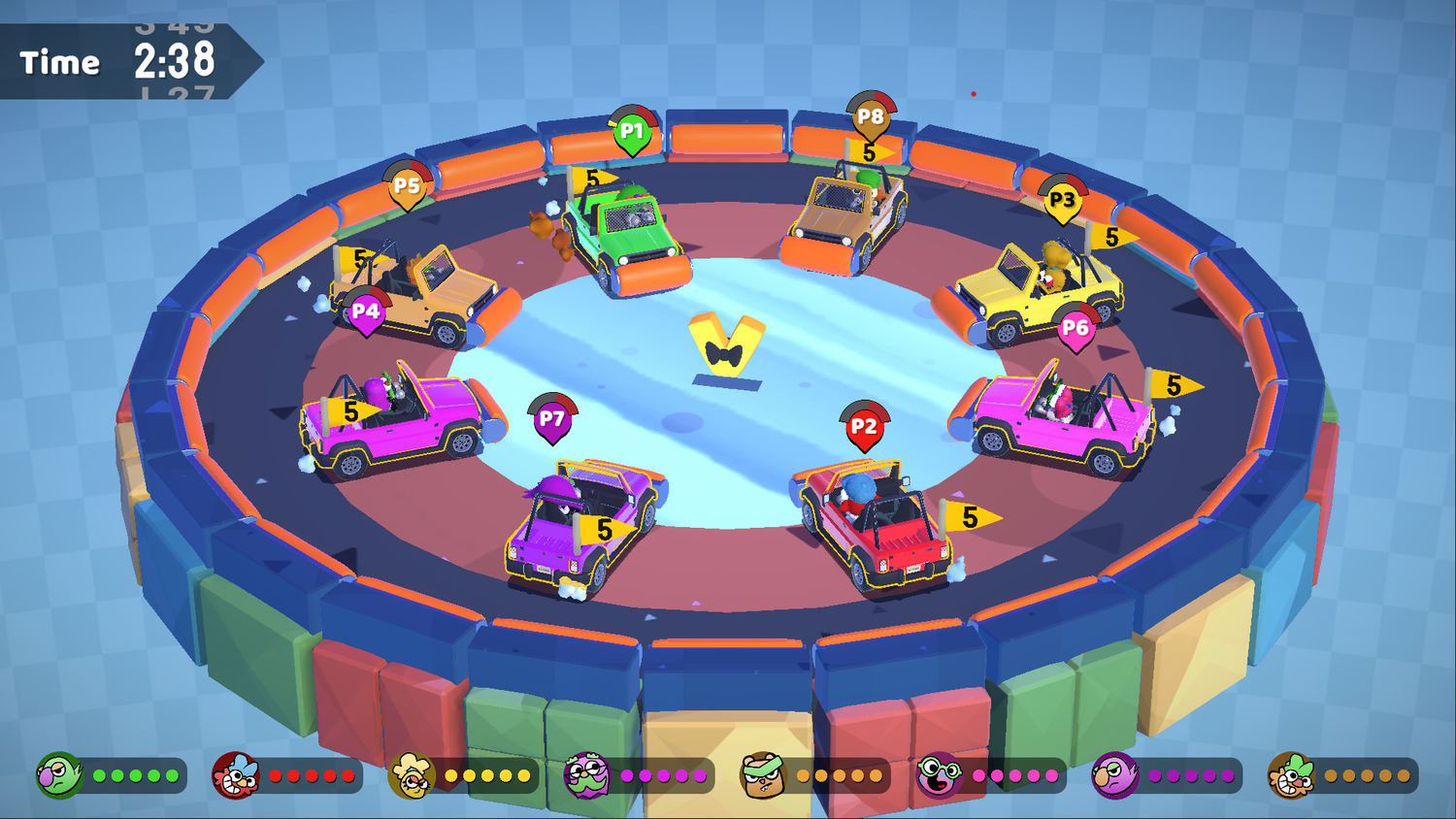 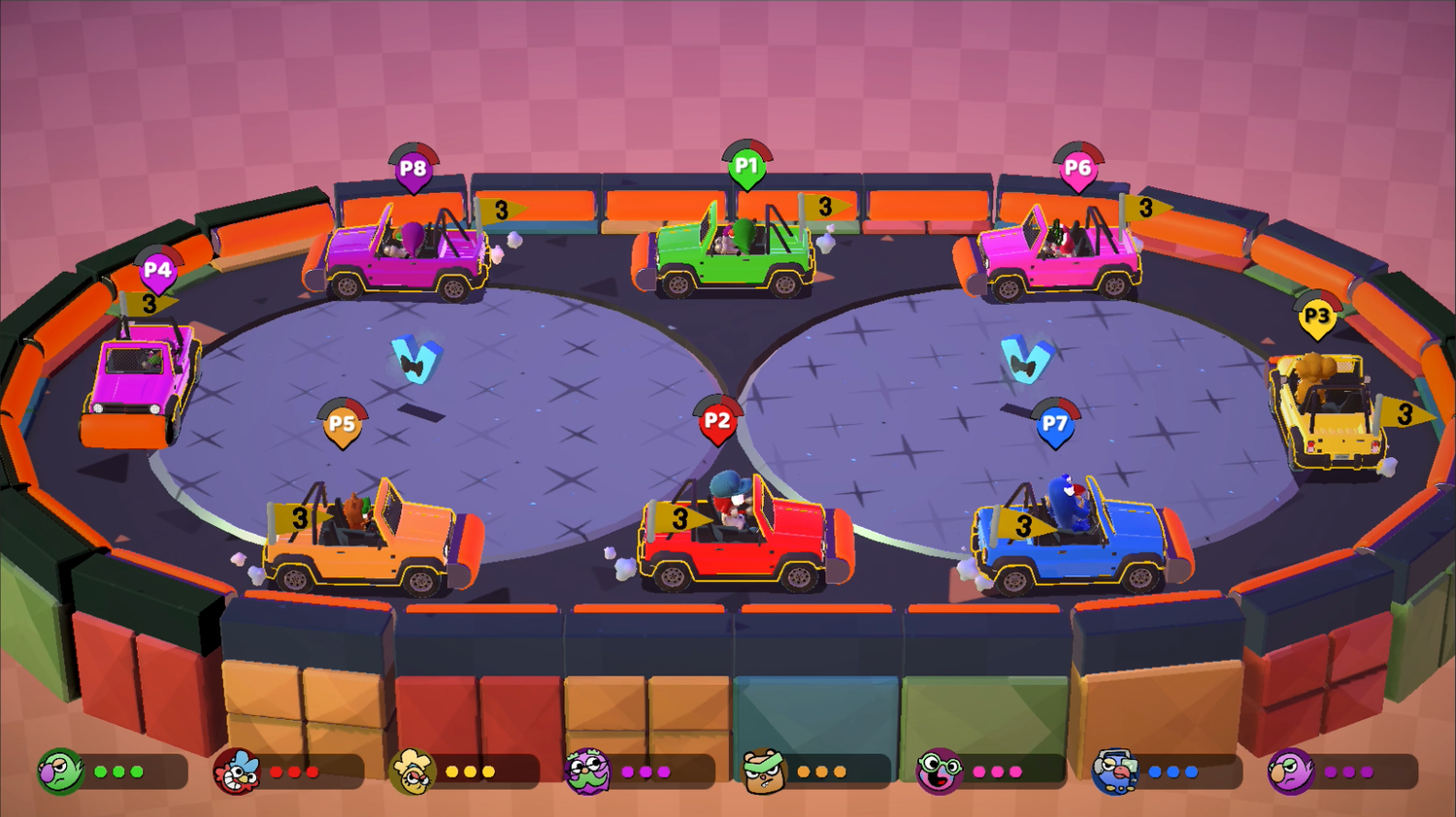 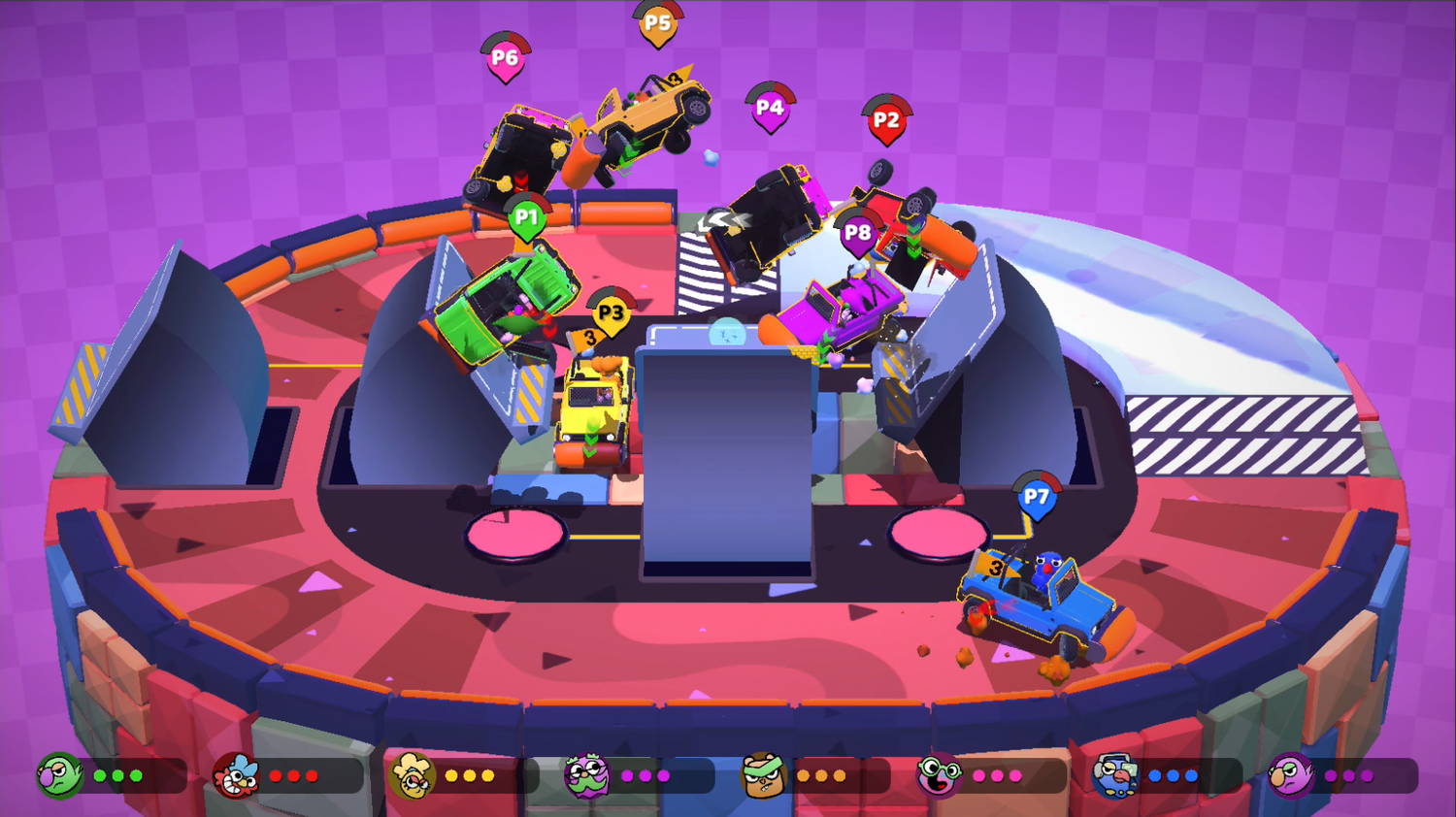 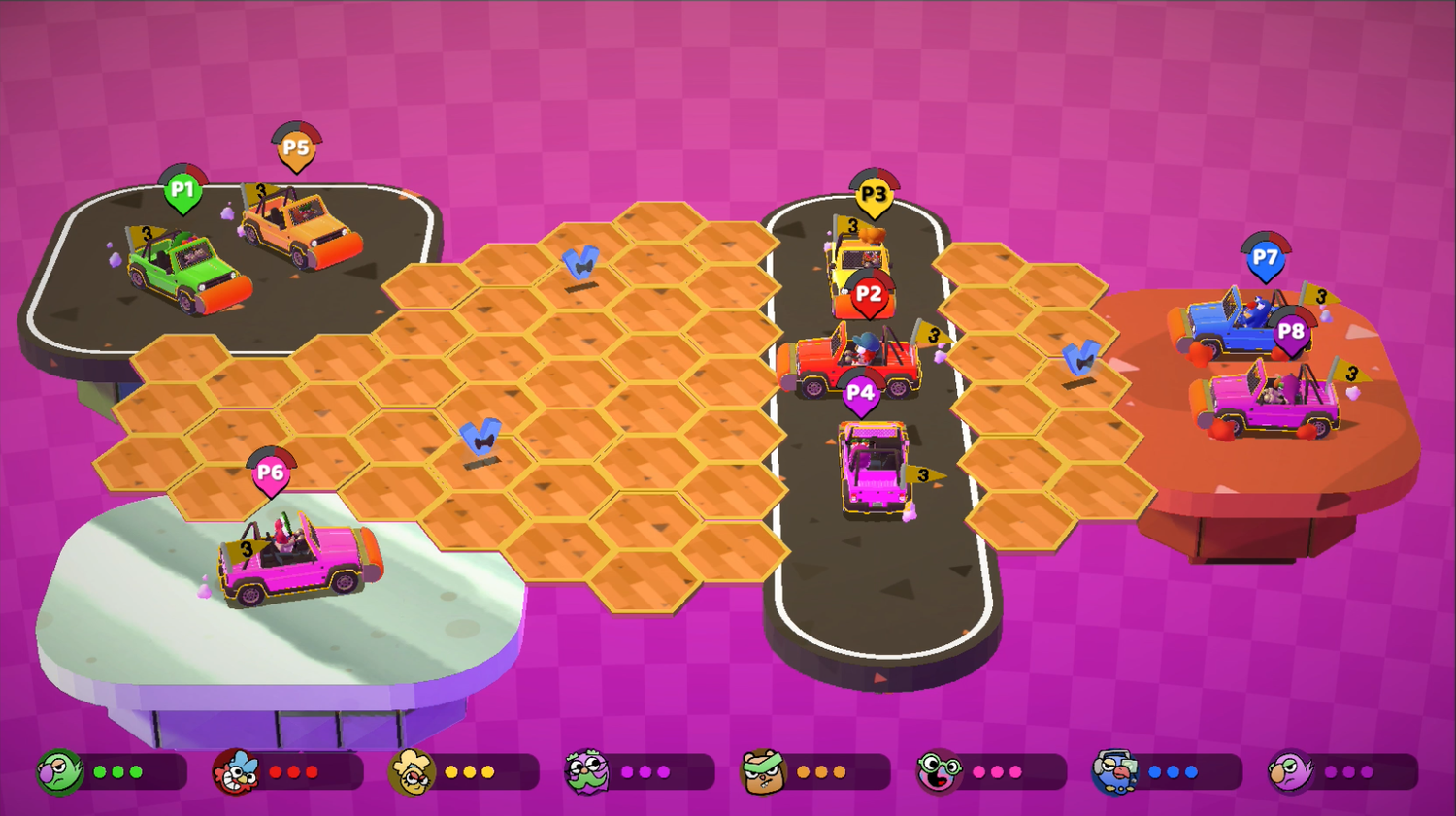 In Knockout players drive, shove, and bump to be the last one standing! There are four different courses to choose from and TONS of options to customize: 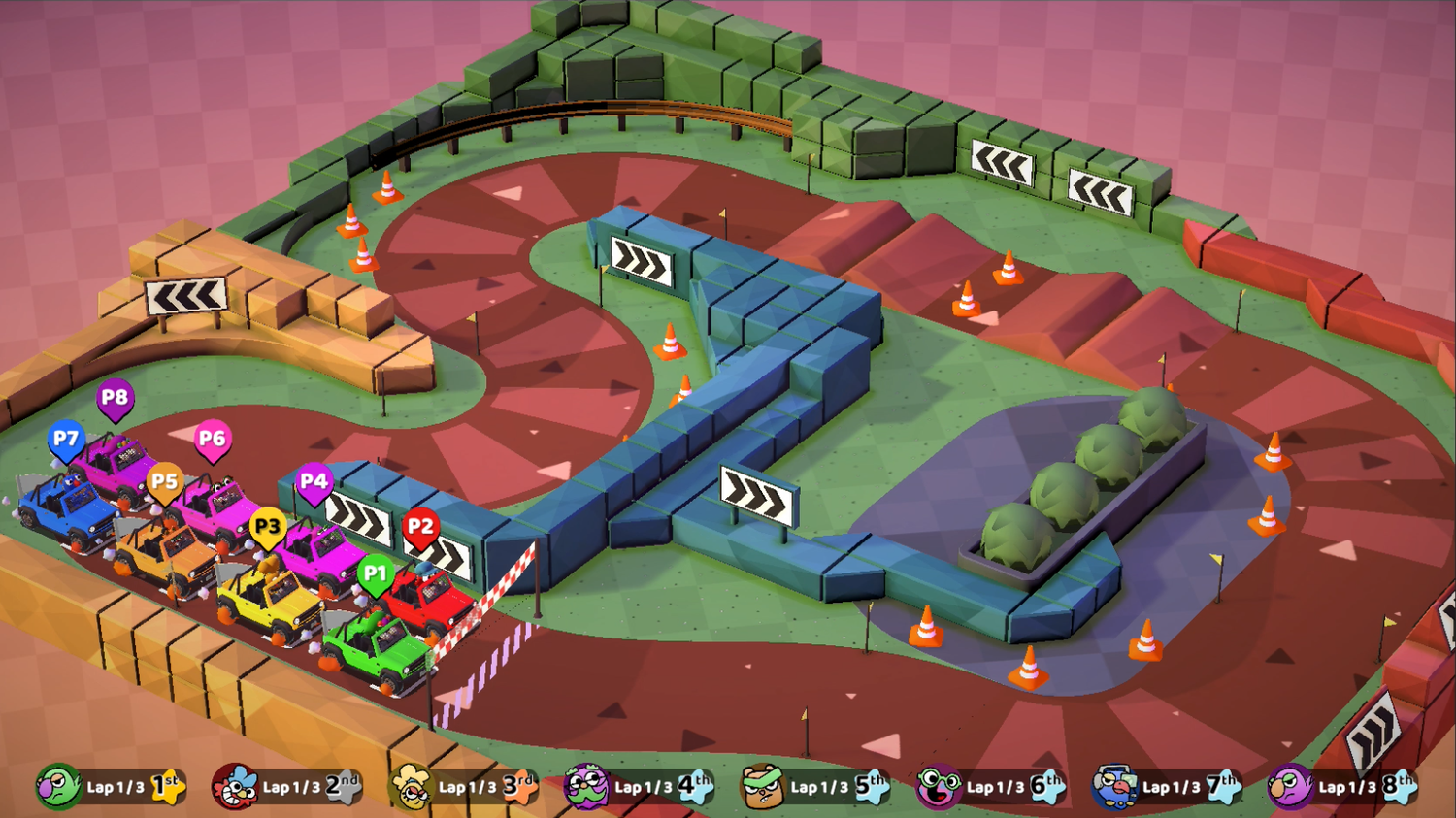 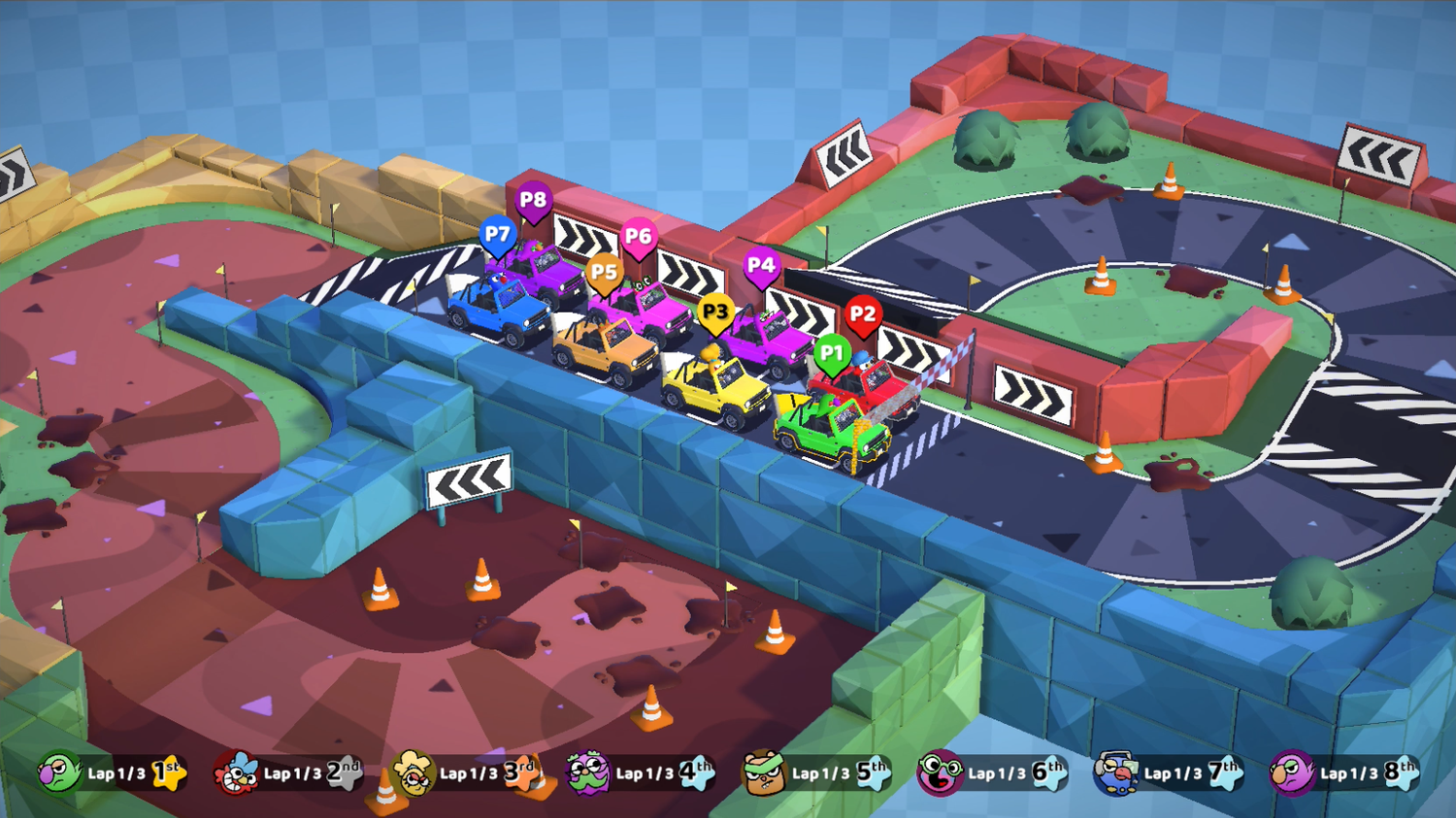 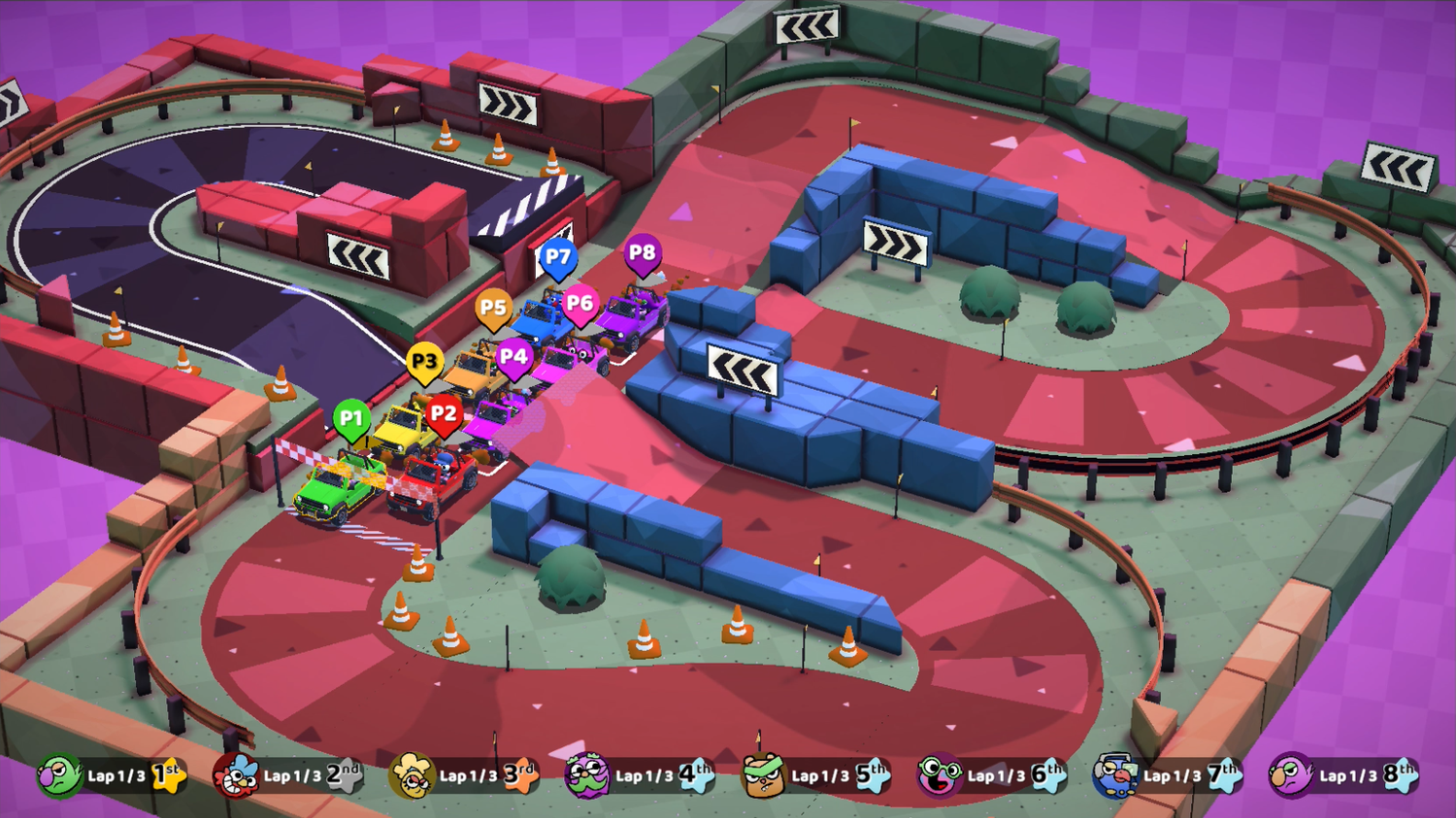 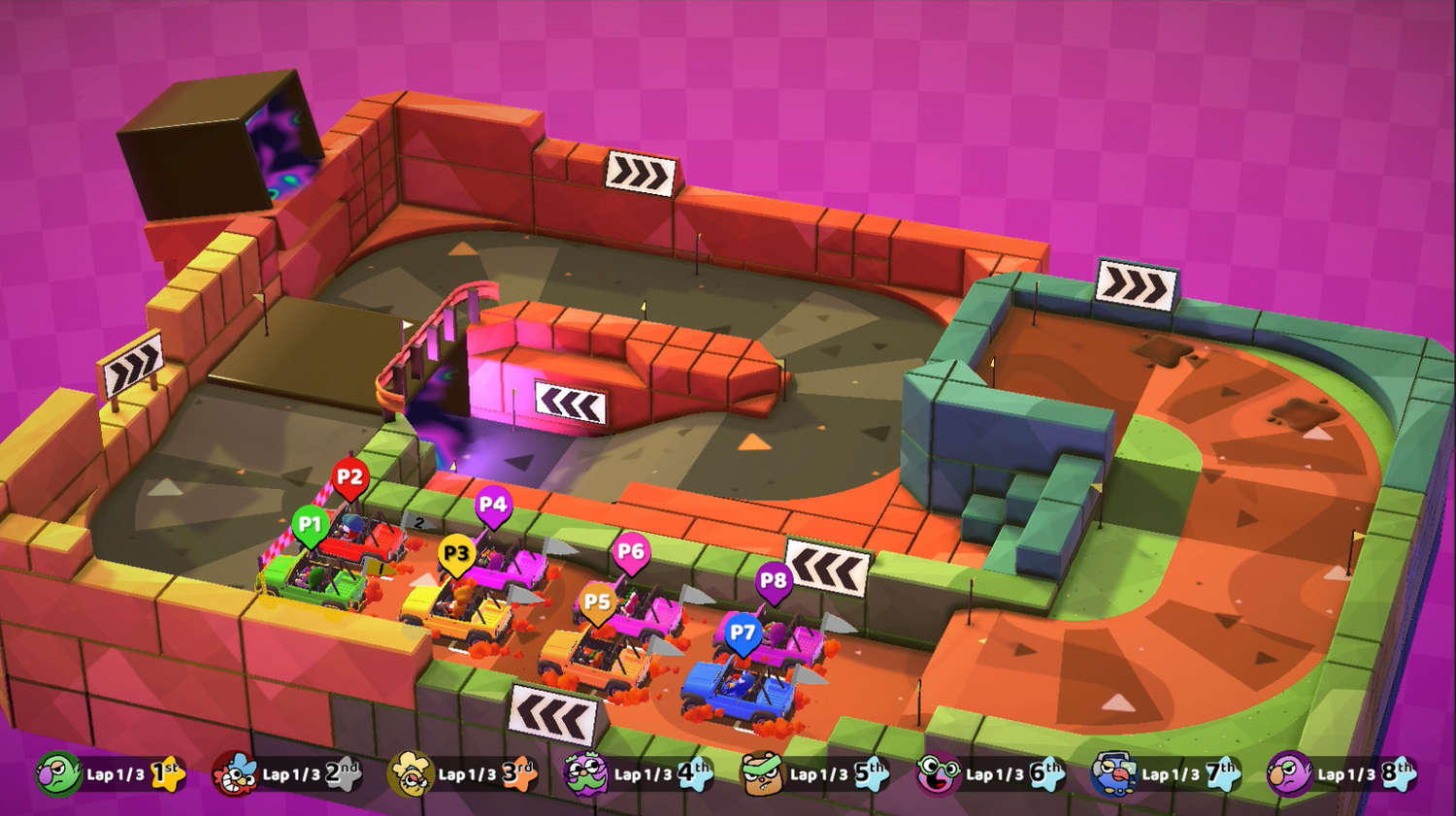 In Rally Race players must steer, corner, and boost their way to first place! Once again there are a total of four course and loads of customizations. You’ll also need to manage the track type to ensure victory: 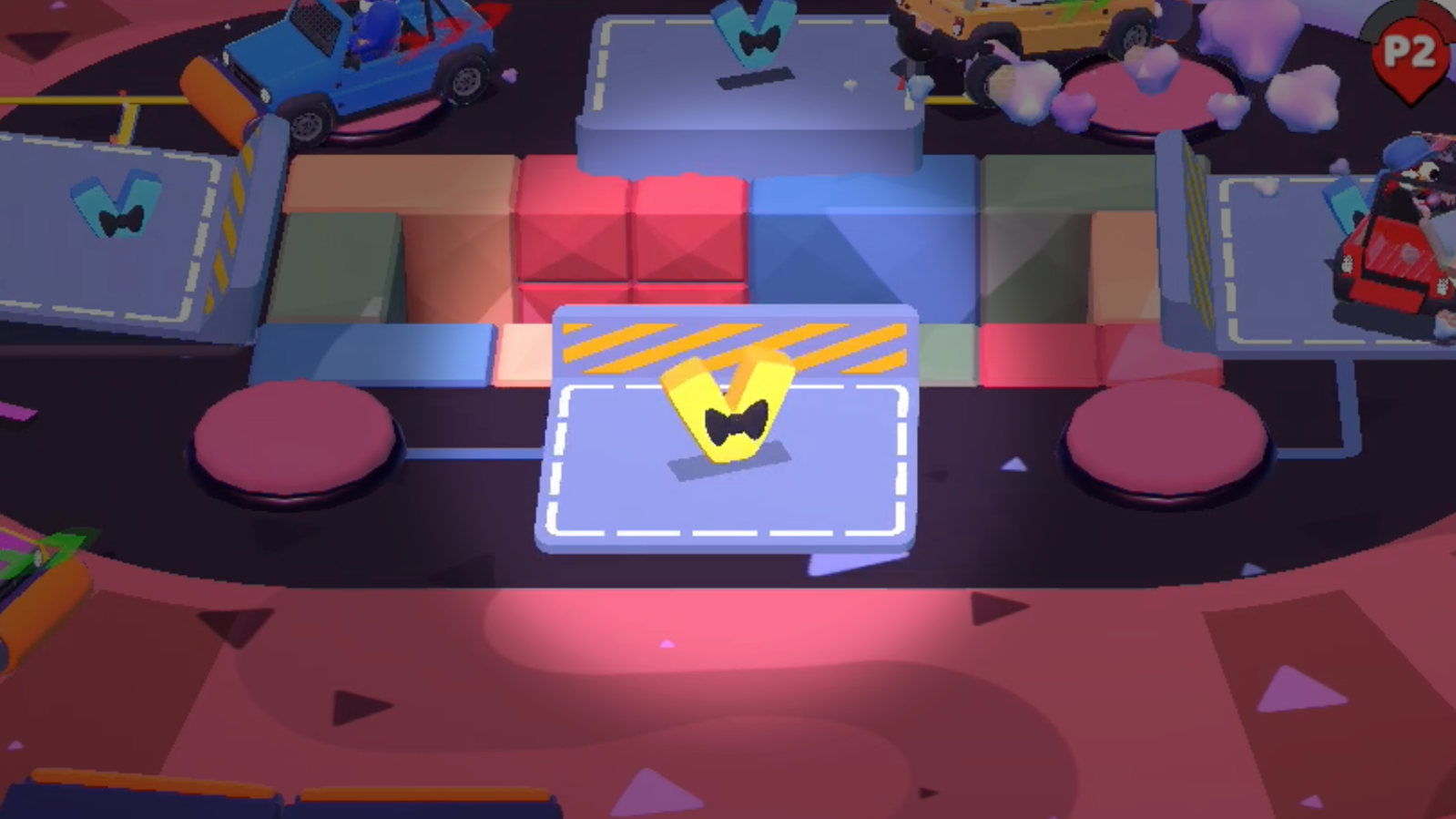 Both Party Games also feature a new Special Pickup in the form of a rotating yellow “V”. These mysterious pickups have a mind of their own – like Forrest said, “You never know whacha gonna get” If you’re lucky you’ll overheat everyone’s car! If you’re unlucky, only your car will overheat. Curse you, fates!! 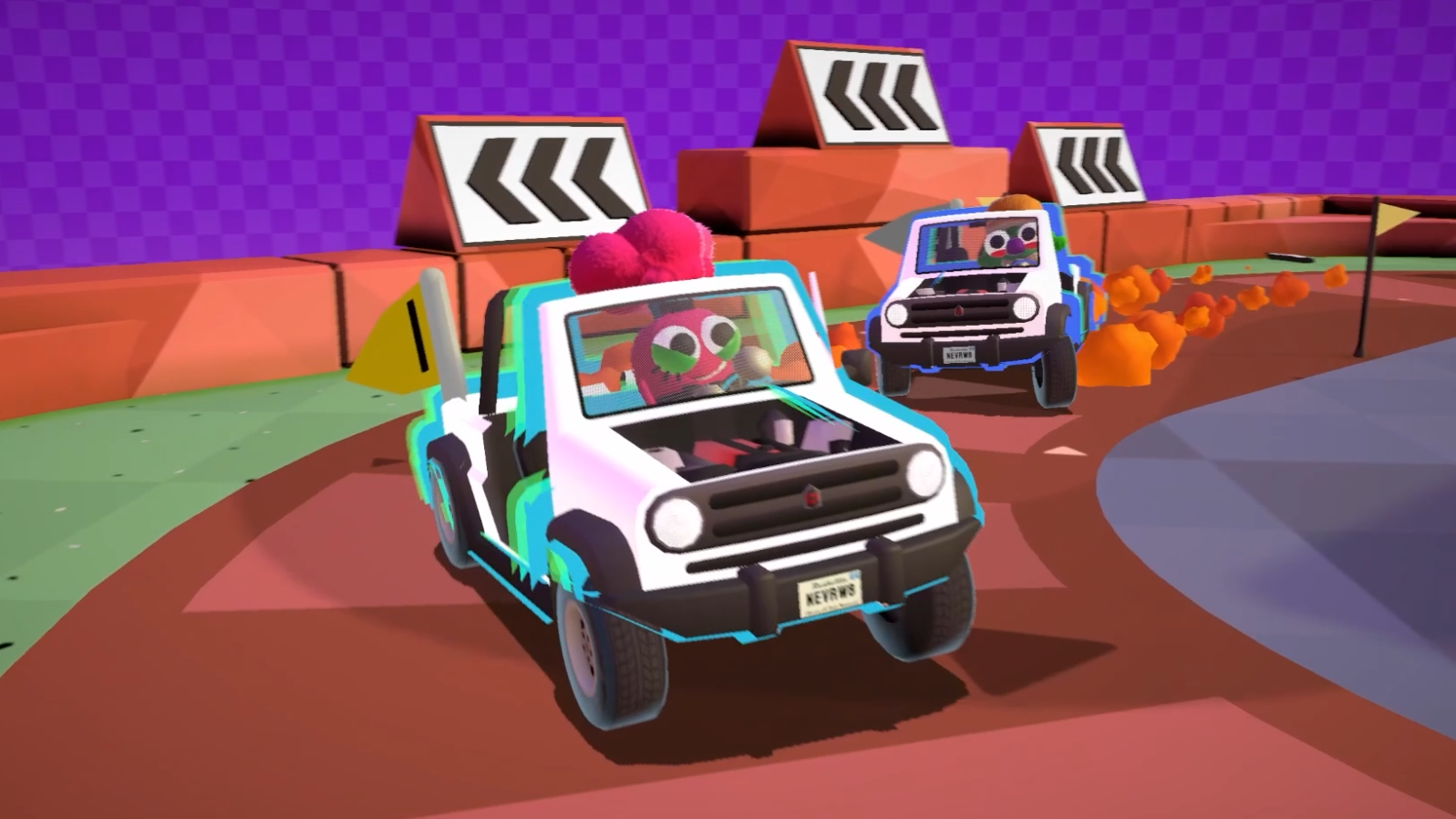 Tied of cars being the same old speed all of the time? Well time to celebrate, because now you’ve got BOOST!
Boost allows you to speed up on demand – in both the regular Valet levels and the new Party Games! You can even customize the Boost behavior:

Driver’s Ed has been updated to include Boost, so check out the tutorial again if you need a refresher. 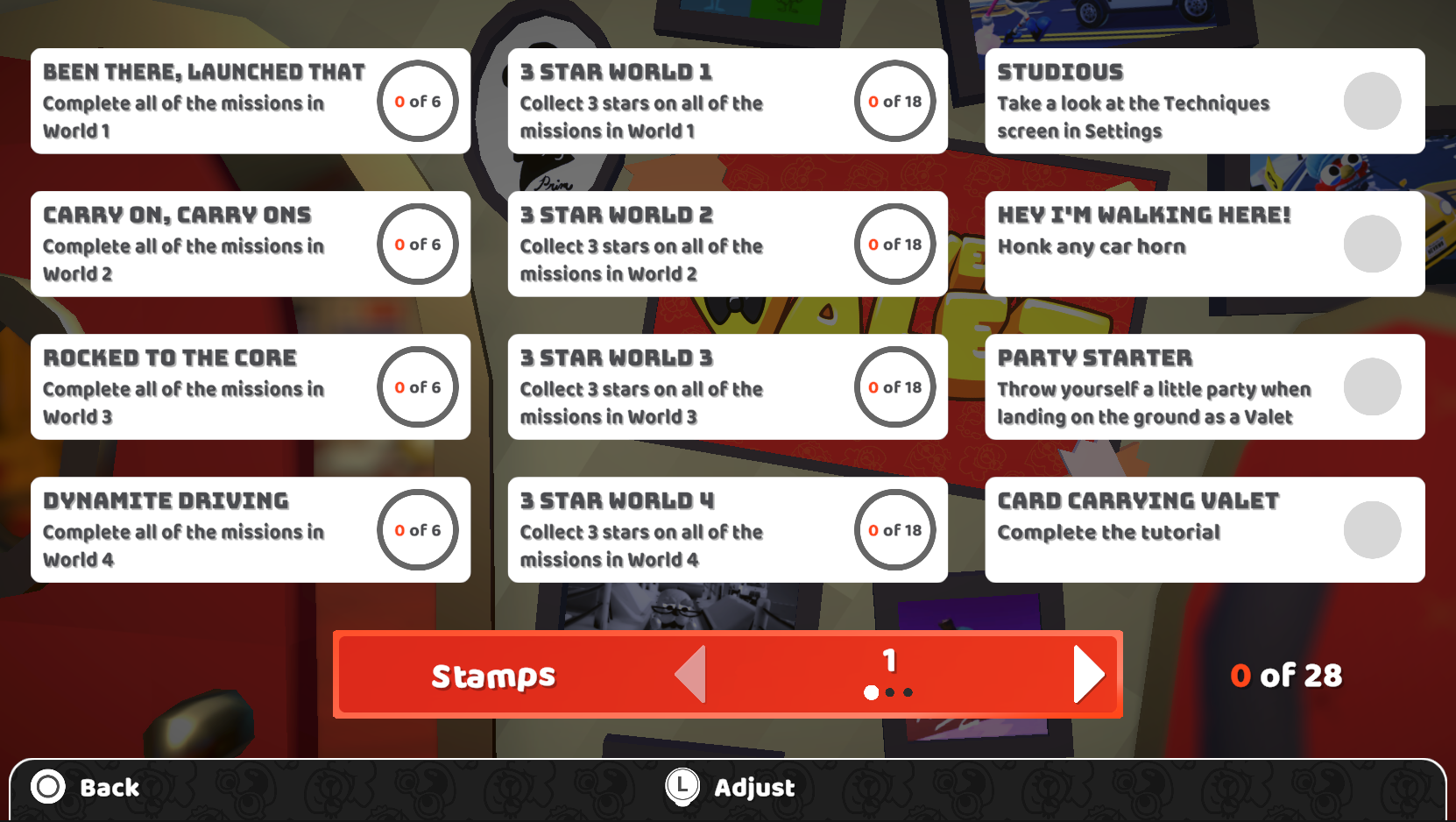 Very Very Valets are already traveling around the globe parking cars – it only makes sense they’d want a stamp book for collecting their memories! There’s over 20 different achievements to complete as you make your way through the game. This includes very very important tasks like finishing missions, collecting stars, and of course honking horns. You can see a full list by going to the Stamps screen.

And here’s a trailer for the Very Very Valet version 2.0 update:

It’s also worth noting that as of now, Very Very Valet can be purchased at a lower price. The game has been reduced to $14.99 permanently.