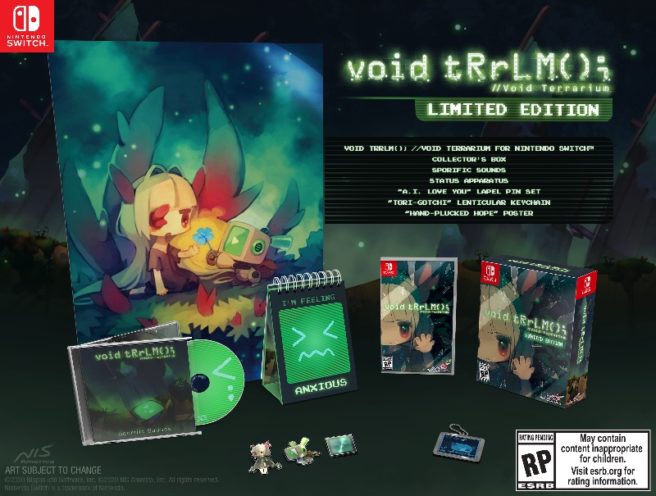 The roguelike RPG void tRrLM(); //Void Terrarium is getting a release in the west, NIS America has announced. It’ll launch on Switch this summer in North America and Europe.

In a world contaminated with toxic fungi, a discarded maintenance robot finds a girl named Toriko on the brink of death among the discarded junk in a scrapyard. After nursing her back to health, it is revealed that she may very well be the last remaining human, and is highly vulnerable to the deadly conditions of the outside world. To ensure her survival, the robot and his newfound friend, a decommissioned AI known as factoryAl, creates a refuge for her within a terrarium. To reinforce the terrarium as well as Toriko’s poor health, the lone robot must venture into the wasteland to gather resources while battling the vagrant machines and mutated creatures that roam there. Along the way, the uncertain future of Toriko‘s existence and with her, the entire human race, will slowly come to light…

Hope in a Cold World – From the creator of A Rose in the Twilight and htoL#NiQ: The Firefly Diary, this harrowing roguelike adventure combines cute visuals with a somber yet whimsical post-apocalyptic story.

Custom-Made Caretaker – Install various equipment, skills, Knacks, and parts you find on your expeditions to improve your ability to explore the wasteland and fight enemies, while preventing threats to Toriko’s health by feeding her, curing over 15 possible diseases, and building her various gadgets to make her life more comfortable in the wasteland.

The Mysteries of the Void – Choose your loadout wisely as you fight through procedurally generated levels in turn-based combat. No two adventures are alike when braving the toxic wastes.

void tRrLM(); //Void Terrarium will have a special limited edition on the NIS America store for $59.99. Pre-orders will be open shortly here.