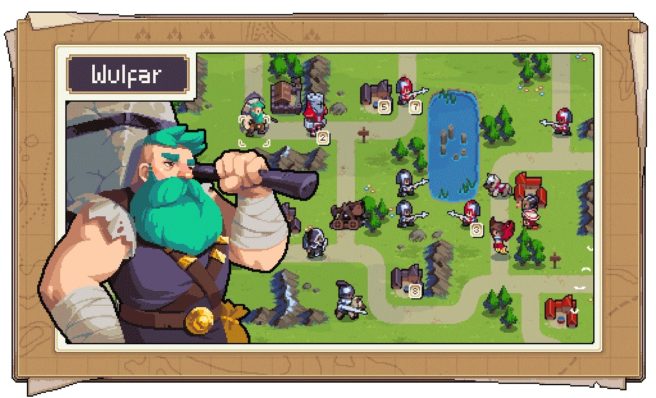 Chucklefish will be adding Wulfar to Wargroove as a new Commander, the developer announced today. It will be introduced as part of upcoming DLC for the game, which will be entirely free.

Here’s a rundown of what to expect from Wulfar:

Meet Wulfar, an Outlaw Chief. Anyone who’s played through the game’s main campaign should familiar with units from the Outlaw faction – but our heroes have never encountered an Outlaw commander!

Wulfar is the Chief of the largest and oldest Outlaw clan in Aurania. He stands enormously tall and uses his colossal strength to wield his weapon of choice – a massive stone hammer. It may seem a clumsy instrument, but years of training allow him to wield it with expert precision.

He comes from a long line of pirates and thieves – and uses his flexibility and adaptability to overcome opponents in battle. Though many are intimidated by his towering physique, Wulfar’s strong resolve, quick thinking, and clever problem solving are the reasons his Outlaw clan follows him.

Wulfar’s groove uses his hammer like a supercharged golf club, launching his target across the map, dealing damage to both the target and any enemies they land near. With one fell swoop of the hammer, Wulfar can launch ground units into the ocean to immediately defeat them or swing at allies to reposition them during battle.

Those attending EGX 2019 will be able to get a first look at the new content on the way for Wargroove.