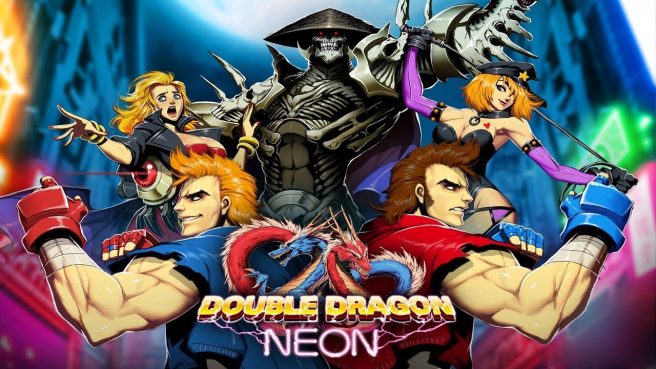 First released in 2012, Double Dragon Neon is now coming to Switch. The beat ’em up game, developed by WayForward, launches later this month.

We have the following overview and trailer for Double Dragon Neon:

Legendary martial artists, Billy and Jimmy Lee return in this creative re-imagining of the classic beat ‘em up, Double Dragon Neon. Fight your way through countless henchmen including Linda and Abobo on your way to rescue the love of your life, Marian! Trained in the special form of martial arts called Sōsetsuken, hunt down and defeat the evil Skullmageddon!

Features
– Mix tape system lets you mix and match unique abilities and powerful new attacks.
– String together attacks for brutal combos to keep your foes down and out.
– Brawl through a variety of levels including dangerous city streets, twisted science labs, an evil stronghold, outer space and more!
– Use a variety of weapons including bats, knives, whips, and more to incapacitate unsuspecting enemies.
– Original soundtrack by award winning composer and sound designer Jake Kaufman.
– Developed by WayForward, the award winning team responsible for DuckTales: Remastered, BloodRayne: Betrayal, and A Boy and His Blob

Double Dragon Neon launches for Switch via the eShop on December 21.