What Lies in the Multiverse debuts official gameplay video

Posted on February 8, 2022 by Brian(@NE_Brian) in Switch eShop, Videos 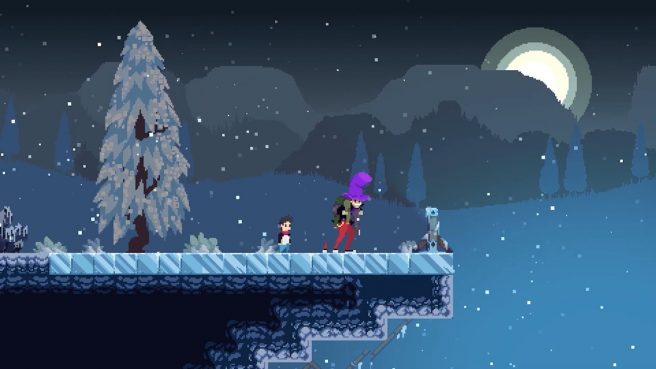 Publisher Untold Tales as well as developers Studio Voyager and IguanaBee have debuted a lengthy gameplay video for What Lies in the Multiverse, their dimension-shifting dramatic comedy title. Fans can get a look at 10 minutes of footage from the pixel-puzzle-platformer featuring commentary from Untold Tales community developer Sadie. Specifically, we have a look at the second chapter.

Here’s everything you need to know about What Lies in the Multiverse:

What Lies in the Multiverse is a game about worlds turned inside out. Harness the power of parallel universes to alter reality in mid-air, turning pitfalls into bridges, walls into tunnels, and foes into friends, in a bombastic puzzle-platformer filled to the brim with hijinks and chaos.

The multiverse encompasses all possible worlds, a summation of everything that’s ever happened, is happening, or ever could happen. Charismatic scientist Everett claims he’s investigating a strange new world. But if that’s the case, why does he keep committing crimes? Who are the shadowy figures chasing him? And why does reality itself appear to be breaking down? Race to discover the secrets of the multiverse in a bleakly hilarious (and hilariously bleak) story where everything you know can turn on a dime.

Embark on a journey across gorgeous pixel-art worlds, each with a unique parallel universe you can dive into at will.

Switch worlds in mid-air. Can’t reach a ledge? Bam! Now it’s closer. Sick of sliding around on ice? Kapow! Alternate to a universe with the firmer ground.

Meet a vast cast of quirky characters, from zen monks to hairy bikers, and see how they change from one reality to another.

Befriend a charismatic but hopelessly amoral scientist named Everett and follow him on an adventure through the multiverse.

Discover a light-hearted but emotionally nuanced story that delves into the darker side of human nature.

Watch the new gameplay video for What Lies in the Multiverse below.

What Lies in the Multiverse is due out for Switch via the eShop on March 4.