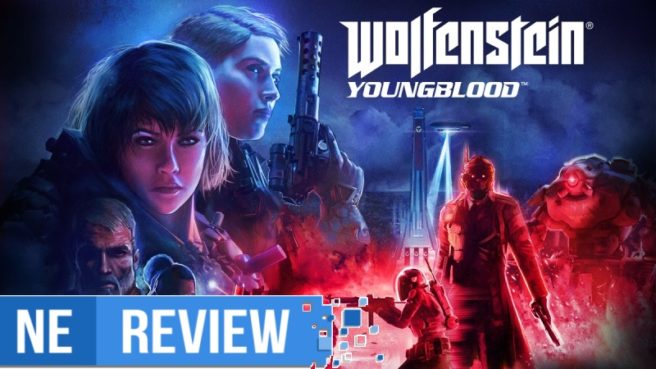 If you’ve already had the pleasure of experiencing Wolfenstein: The New Colossus on Switch then you’re familiar with how the series has managed to distill the FPS formula down to perfection. In an era dominated by damp fetch quests and morally ambiguous “makes you think” villains, both MachineGames’ Wolfenstein and id Software’s Doom reboot have felt like a breath of fresh air for those of us who get misty-eyed over 90’s shooters. For the uninitiated, here’s a brief rundown: Entrench your mind in a Tetris-like zen state, and skittishly zip around maps that are designed less like real places and more like skateparks. You have two goals: Use gun and give death. Despite the immense praise both Wolfenstein and Doom have garnered over the course of this console generation, there may be a feeling over at Bethesda that change is now needed to differentiate these two franchises going forward, and this is exactly the impression I get from playing Wolfenstein: Youngblood.

Much of the focused linearity that has carried the Wolfenstein series through its last three outings is nowhere to be seen in Youngblood. Instead, we now have a semi-open world map that’s divided into zones for you to explore at your leisure. The game also features mandatory co-op, either online with real humans or in the charming company of an inept AI partner. As if that wasn’t enough change, how about some in-game economy to shake things up even further? Well, you’re in luck. There are a plethora of skins, weapon and character upgrades, timed events, and currencies for you to grind your way towards indefinitely. Oh, and the series’ main character BJ has gone missing too, literally. You play as his twin daughters, Soph and Jess. Got all that? Good.

Despite being horrendously obfuscated, the core element of Wolfenstein – its gunplay – is still present in Youngblood. Weapons have a meaty presence and weight to them, both in how they look and how they sound. They also fit in extremely well with the world on display here, which is dripping with detail even when playing in handheld mode. Technically speaking, the wider scope of a game like this is executed respectfully enough on the Switch’s modest architecture. The game might struggle to meet its 30 frames per second target when firefights start to escalate, but a potent combination of motion blur and camera shake generally mask the most severe drops in performance. I would have definitely preferred a higher resolution over things like volumetric lighting and particle effects, but port-aficionados Panic Button have once again managed to make the best of a difficult situation. 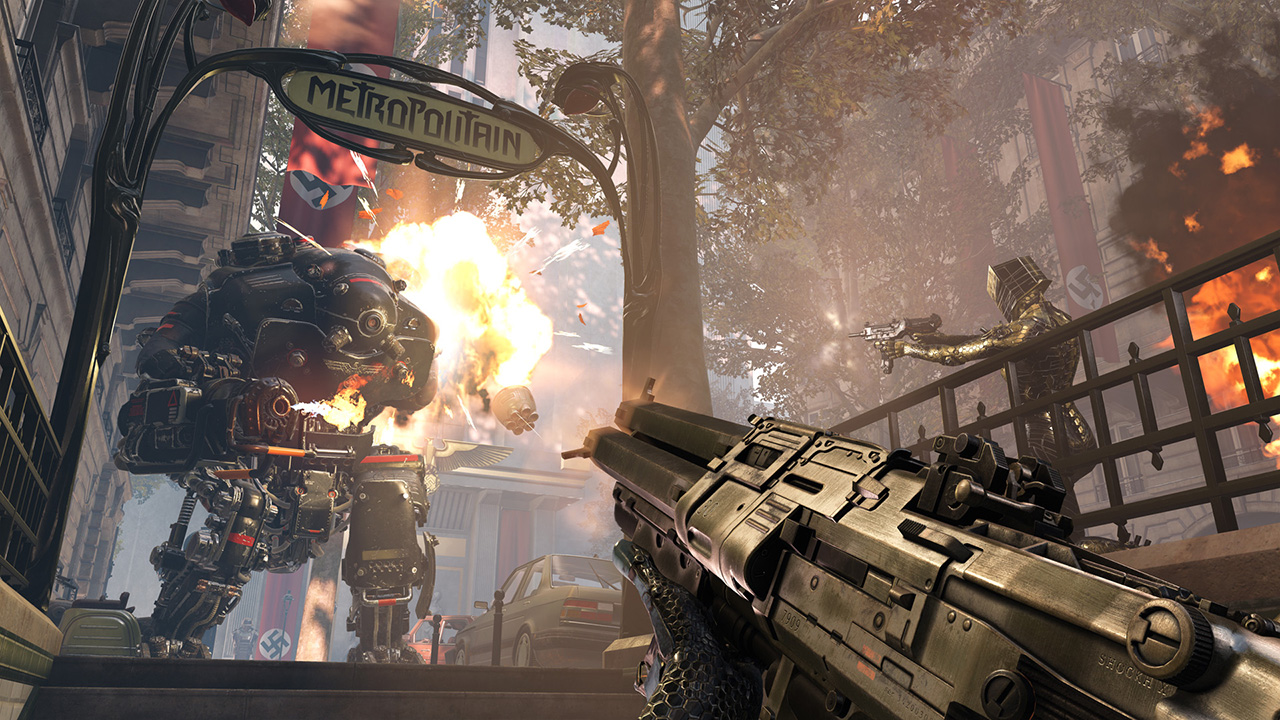 From an artistic perspective, the world and its circumstances are relayed beautifully. The game takes place in Paris, or rather “Neu-Paris”, an Orwellian envisioning of Nazi occupation in 1980’s Europe. There are constant little reminders of the Nazi regime’s horrendous effect on everyday life – chirpy tannoy announcements reminding citizens to read Mein Kampf, government-approved movie posters – all the trappings of an oppressive regime in motion. The open-world design allows you to discover some really poignant set dressing too, at one point I stumbled across a wrecked pinball machine adorned with ally propaganda – a US soldier brandishing a salute and a cheesy grin. It was accompanied by a slogan, “We can do it” or something similar, and as I craned the camera around from this relic of hope I was greeted by a walled ghetto that closely resembled a concentration camp. It was genuinely impressive, and a nice incentive to keep blasting away at anyone adorned with a swastika.

Despite the initially impressive world-building, a lot of the impact starts to wear off after only a few short hours with Wolfenstein: Youngblood. The game’s entire mission structure takes its cues from the looter-shooter school of thought. When you’re back at your safe house, you can restock on essentials like ammo and health, and speak to members of the French resistance to receive side missions (kill the man, find the battery, rescue the person). You also receive smaller assignments via radio while you’re out in the field, and once you’ve completed one or two of these simple diversions, you’ve really seen all the game has to offer. Worse still, many objectives and missions will overlap with certain areas and other activities, meaning you often end up fighting through the same sets of regurgitated enemies in the same one or two areas over and over and over again. There are a couple of bespoke story missions that take on a more linear format – referred to in-game as “raids” – but these aren’t without their own set of frustrations. They completely lack any checkpoints, and they usually require you to backtrack through more respawning enemies once the main objective is completed. It all feels completely at odds with the core tenets of Wolfenstein as a franchise, and it falls extremely flat as a result. 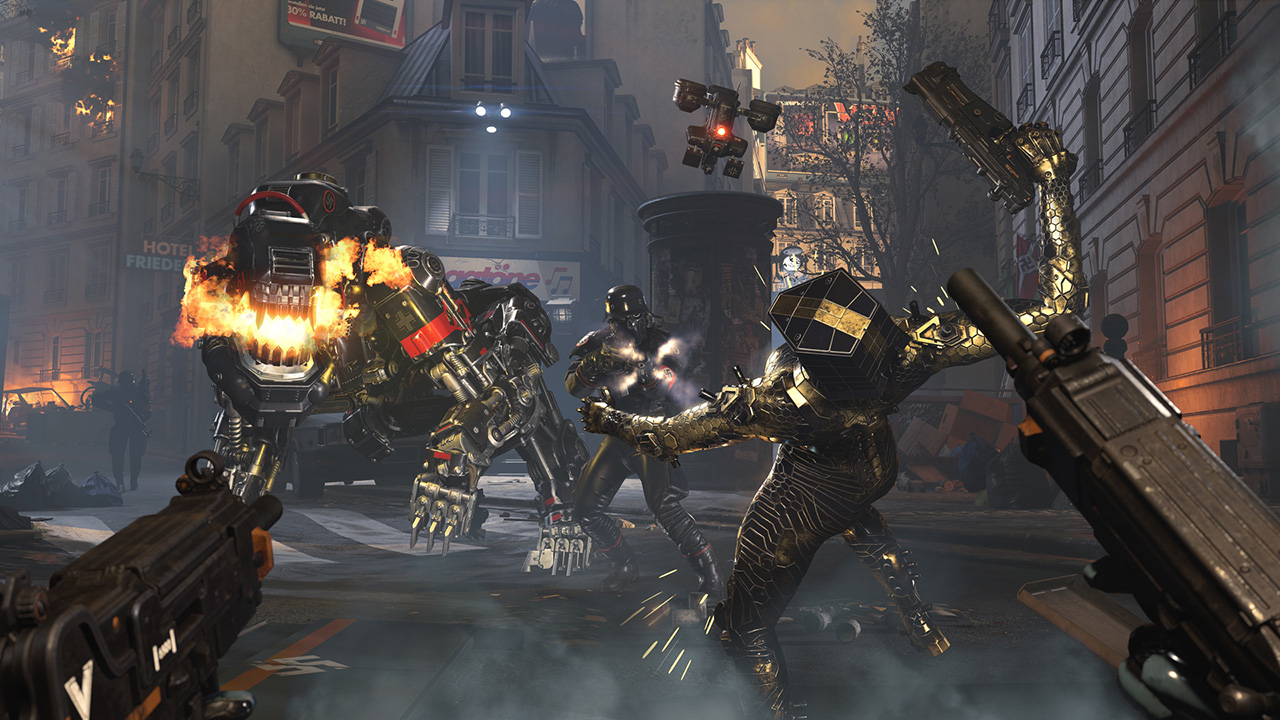 A lot of these issues could have been forgiven or at least mildly subsidized if the story and characters of Youngblood were anything worth remembering. You play as either Soph or Jess Blazkowicz, and your main goal is to locate your pesky dad who has inexplicably vanished into thin air. After securing the vaguest tip-off ever seen in a work of fiction (a picture of a woman associated with the French resistance), the pair hijack an FBI air carrier with the help of their friend Abby and set off for Paris. The writers have tried to imitate the charm and goofiness of 80’s movies like The Goonies, but they have missed the mark in every conceivable way. Any interaction you witness between characters feels forced and unnatural, as if everyone is just saying words in each other’s general direction without ever really succeeding in having an actual conversation. The incidental dialogue tossed between the main characters is also extremely limited and the same few lines are repeated ad nauseam, lending the game a tone less like a Spielberg movie and more like some kind of fever dream.

It’s also worth mentioning some of the choices made around the game’s character design. Given the type of experience that a Wolfenstein title typically is, it’s hard not to feel a sense of deliberation around some of the decisions MachineGames and Arkane Studios have made. In Youngblood, just about every major and minor character is a woman. It’s a very topical choice given the ongoing discussion around representation in games, but in this instance it feels utterly patronizing and tokenized given just how awful the writing is. Youngblood could have offered a genuine and fresh perspective on this type of game through a fresh set of characters, but instead, we have a badly executed design decision made all the worse by cringy dialogue and non-existent character development – it’s an excellent opportunity thoroughly blown. 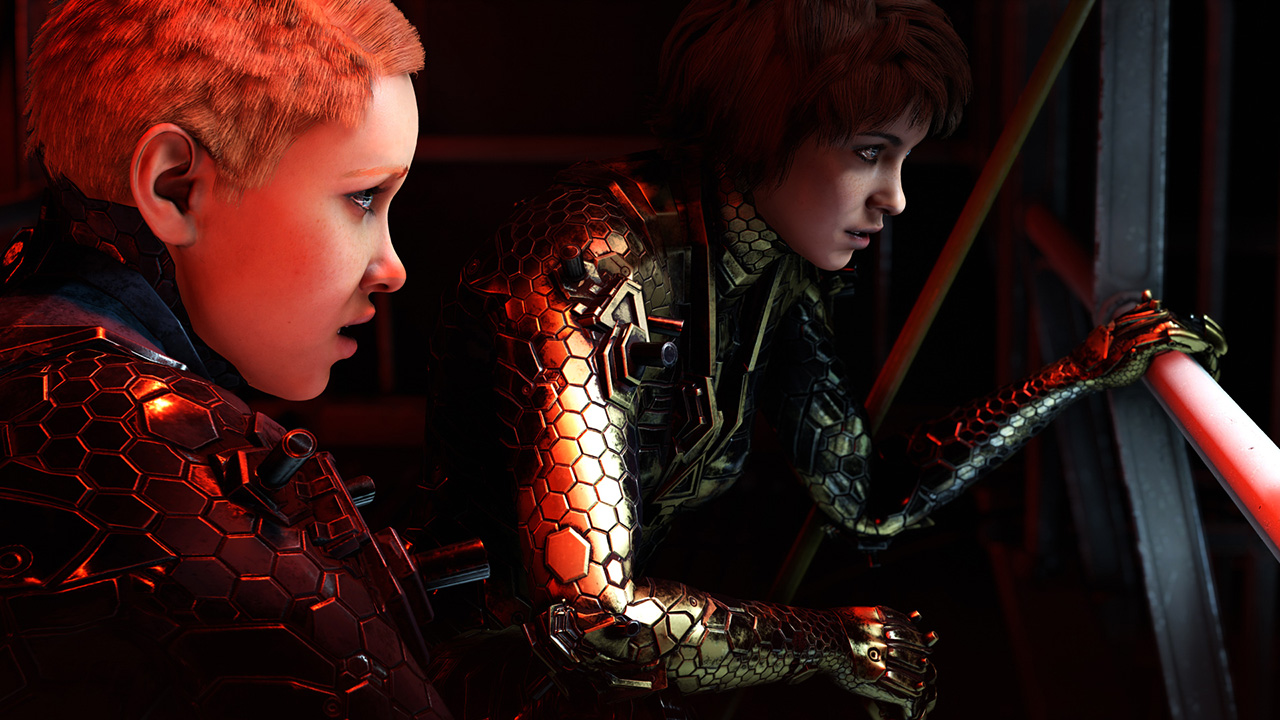 Whilst almost every other aspect of the game fumbles around its identity with relative uncertainty, the inclusion of various currencies, boosters and cosmetic upgrades to Youngblood feels laser-focused and intentional. Out of all the changes made to the fundamentals of Wolfenstein, the newly introduced in-game economy is probably the most egregious example of corporate interference I’ve witnessed since Assassins Creed’s “time-savers” – especially considering the lineage of games like Wolfenstein and Doom. It’s all here – skins, upgrades, boosters – the whole nine yards. There’s no way you could possibly unlock everything the game has to offer in a reasonable timeframe without paying real money. Read into that what you will – but for me, once I felt the constant temptation to spend more money on boosters and micro-tat, my progression through the game felt artificially skewed towards keeping me on the back foot.

Taking everything into consideration, it’s really difficult to even partially recommend Wolfenstein: Youngblood. Sure, the gunplay is there and the art is spectacular, but there is so much that gets in the way between you and the unbridled satisfaction of blasting limbs off of Nazis. If this were the only manifestation of the series or even this type of game on the Nintendo Switch, I’d probably cautiously recommend that you wait until a deep deep sale before picking it up. Unfortunately for Wolfenstein: Youngblood though, there is already a vastly superior game called Wolfenstein: The New Colossus available on the console, and many of you already own it. There also exists another game, Doom, which scratches the same itch as The New Colossus to an equally impeccable level – as I’m sure you’re all aware.

Of all the redemption arcs we’ve seen in the video game industry, none go hand in hand quite as well as those of Doom, Wolfenstein and Nintendo. All three of these monoliths have strayed somewhat from their core philosophies in the past, and despite many outward pressures and a constantly shifting landscape, they have each managed to correct their respective courses with aplomb – all by simply remembering the importance of having one really good idea, and a very clear message to carry it. It seems fitting then, that Bethesda would capitalize on both their own renewed success and Nintendo’s good fortune by vigorously supporting the Switch with Doom and Wolfenstein titles. Everything happens in cycles though, and with Wolfenstein: Youngblood we might be seeing the end of the series’ fortuitous rebirth, leaving two success stories where there was once three.

Wolfenstein: Youngblood review copy provided by Bethesda for the purposes of this review.