World Ends with You devs on how Final Remix came to be, more sequel talk, other comments 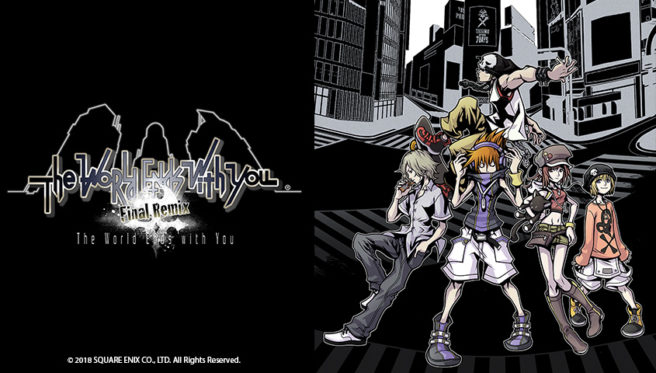 To celebrate the launch of The World Ends with You: Final Remix in Japan a little while back, a special event was held with a few select fans at the Square Enix Official Shop and Café “ARTNIA”. It was attended by the following representatives:

In reference to the ‘Shinjuku disappearing’ plot from The World Ends With You: Final Remix’s ‘A New Day’ scenario, Nomura commented that the idea had been floating around since the days of the DS version’s development. Kandou from the initial development team had apparently always wanted to make a sequel, and also commented on what went on back then.

Nomura also said that “there were a number of times where something we had planned would be scrapped right from the get-go. At one point the game had been planned to play somewhat like a rhythm game.” According to Hirano, “Enough time had passed since the release of the DS version that if they were going to release something, it would be something to introduce new players to the series.” So it seems that that’s how ‘Final Remix’ came to be.”

During the event, a guest panel was held with the five representatives listed above.

Here’s a transcript of the more notable questions and answers:

Q: We want more songs from The World Ends with You to be added to Final Fantasy Theatrhythm: All-Star Carnival!

Hazama: If we promise something like that now, it’ll only make people angry later on! (sweats) Though, it doesn’t seem like acquiring the rights to do so would be much of an issue. We’ll consult with the development team! Suppose there aren’t any songs added, though – that’ll be on us…

Q: Are there any plans to release a replica set of headphones modeled after Neku’s?

Hirano: Although there aren’t any plans for anything like that at the moment, we hear you. I’d like to see if a collaboration like that’d be possible!

Kando: So, would they be headphones that play “Twister” all the time or something? (laughs) Real talk though – if we do go through with it, you’d better buy it!

Q: Please tell us about your favorite Pin from The World Ends with You and how you came up with it!

Kando: Probably “Me Time is Free Time” from Vol. 4 of the physical Pins we released. It was also fairly popular with the development team. While we were developing the DS version of the game, we held a Pin design contest – we even had people outside of the development team join in!

Q: We want a The World Ends with You figure!

Hirano: We’ve already announced a Neku figure – anything else would depend completely on Matsushita-san.

Matsushita: Give us the money to make them and we’ll talk. (laughs) The World Ends with You has also gained some popularity in both North America and Europe; figures are pretty popular worldwide, so we can’t rule out the possibility of more.

Q: We want another The World Ends with You-centric live event!

Kando: We’ve already done something like that two or so times. It’s been a bit since the last one, so I think I’d like to talk to Ishimoto-san (Takeharu Ishimoto) about putting on another one.

Hirano: So, now you know that we “want” to do it… That being said, I don’t know if it’s the right time and place for it just yet. Again, us not putting on another live show would simply stem from a circumstantial inability to do so.

Q: We want you to re-sell the maki-e stickers from the limited edition of The World Ends with You: Final Remix!

Hirano: Since the originals were from a limited production run, they wouldn’t really be the same. If Matsushita-san could use his “guts” to push for more, I think that’d be just fine!

Matsushita: As for the stickers’ production itself, I don’t really know much about it. I do, however, personally think they’re an interesting little product! I’ll consider it.

Q: What does the hair on the back of Neku’s head look like?

Nomura: His hair is actually down – it isn’t tied up at all. It’s pretty difficult to see with his clothes in the way like that, though.

Matsushita: Well, you can see for sure what it looks like on the Neku figure! (That’s free publicity!)

Q: If the game were to get a sequel, could you tell us anything about the world or the setting?

Kando: I’d want it to reflect the state of society at the time. For instance, it’d be kind of strange if we had changed Neku and the others’ cellphones into smartphones for Final Remix’s release, so we released it as it was. If I were to put out a new work, I’d want it to have whatever gadgets people are using at the time. Maybe we’ll still be using smartphones… Or maybe we’ll be communicating with each other through our brain waves! (laughs)

Q: Even though they’re really popular now, back then the people voicing the game’s characters were still fresh to the scene; how did you go about casting them?

Nomura: I basically left it up to my own tastes. (laughs) I actually met Neku’s voice actor – Kōki Uchiyama – when he was around 12 years old and immediately took a liking to him; he was an elementary schooler still back then. He was a bit too young to audition at the time, so I thought there must be an opportunity somewhere else. Later, though, I’d cast him as Roxas, and then Neku.

Q: Can you tell us anything we don’t know about the characters’ designs?

Nomura: I was able to design the characters without too much of a hitch, I had had an image in my head from the beginning essentially. I had known about the game’s story and its contents before I even received the order to start designing the characters, so I was able to just use the images that I had already come up with without being too concerned with the order itself. At the time I had a pretty solid image of Megumi-chan (Kitaniji), and Rhyme had originally been designed as a boy. As you all know though, I’d later change Rhyme to be a girl.

Kando: And I rewrote the scenario to accommodate it! That sunglasses-wearing guy ended up being a boss – I was like, “h-him!?” (laughs) At the time, big-name titles like Kingdom Hearts and Final Fantasy were in the middle of development, so The World Ends with You was kind of like a curveball! And to make the most out of that curveball I took a full swing.

Q: We want The World Ends with You-themed LINE stamps!

Hirano: Aah, we missed out on that didn’t we? Could’ve had something like “So zetta slow!”

Kando: Or something like “Sin! Cosine! Tangent!” Those would be good for Minamoto stamps. (laughs)

Q: Is the thing that Kariya’s holding really candy, or is it a ball of red bean paste?

Kando: On the production side, it was designed to be candy. At the time, though, the screen’s resolution was pretty low, so the brown ball with the black outline we had made ended up being blurrier than it should’ve been. So, with that in mind, maybe it does look a little bit like a ball of red bean paste on a stick. That being said, on the Nintendo Switch version it’d look more like an actual Chupa Chups lollip – I mean, not like any particular candy… Just candy on a stick! (laughs)

Q: Are none of the characters from The World Ends with You ever going to appear in Dissidia: Final Fantasy?

Hazama: We don’t think that they won’t. There are characters from Final Fantasy that haven’t appeared yet, though, so we’d like to consider requests for characters like those first.

Hirano: Thank you very much for your support, as always – it was thanks to you all that we were able to release The World Ends with You: Final Remix. We’ll do our best to keep bringing you TWEWY-related content in the future, so please continue lending us your support!

Kando: I feel a kind of passion for the game that makes it hard to believe that 11 years have actually passed since we first released it. The development team also feels like it’d be a waste to stop things here, so we’ll start developing new content if it’s possible! I’m looking forward to the day when there’s another opportunity like this one.

Hazama: I wasn’t really involved in the DS version’s development, but it truly was a fun title to sit down and play. Whenever I go abroad, I’m still asked about whether there’ll be a sequel to the game, so I definitely feel the fans’ passion for it. And I think that with everybody’s continued support, we’ll be able to grant more of your requests.

Nomura: It’s a pity that the ramen we served today was a bit soggy, but if we ever decide on making a sequel, and if we hold another event like this, I want to serve ramen again (right this time). (laughs) Kando’s doing his best, so stay tuned for the day when we announce new info!