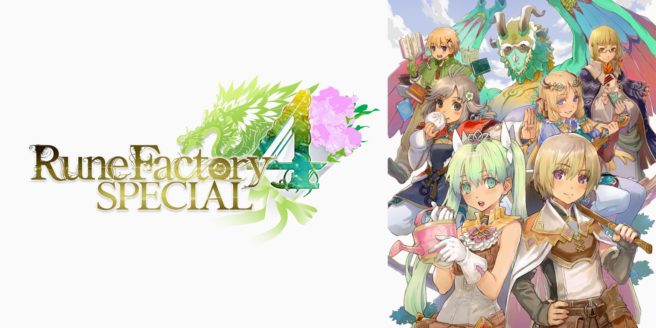 Rune Factory 4 Special originally came out in Japan last July. Meanwhile, North America and Europe are getting the game at the end of next month. Some fans have been wondering why the wait has been so long, especially given that Rune Factory 4 did previously see an English release on 3DS. In a blog post, XSEED explained the situation.

A lot of factors were involved in the new release of Rune Factory 4 Special. XSEED pointed to a change in localization programming tools since the 3DS days, needing to review the entire script, the addition of French and German text, support for dual Japanese and English audio, and fixing other issues and bugs.

A question that I’ve seen a lot on social media is “Why is this taking so long to come out in English?” While it’s true that the game was already localized into English in 2013, in addition to the aforementioned brand new content, there were some unique challenges in bringing it to Switch. I know this doesn’t make the wait any easier to bear, but I wanted to expand on some of the nuts and bolts behind the localization process for an HD remaster with additional content.

A fundamental way in which our localization programming works now is through the use of unique IDs tied to each string of text. The game determines which text to insert based on these IDs, and they make processes such as comparing files and creating changelogs much easier. The text files for Rune Factory 4 on 3DS predate the use of these IDs, so a challenge for the programmers working on the localization was to determine how to get the right English to display for each of tens of thousands of Japanese strings. This was worked out through painstaking work by the developers and the localization experts at Marvelous.

Additionally, our localization team here at XSEED took care to review the entirety of Rune Factory 4’s massive script to adjust text breaks and other formatting to account for the additional space created when moving from the 3DS to Switch. The original 3DS version featured manually entered line breaks, whereas the Switch version was processed with a macro program that adds line breaks automatically. This necessitated a painstaking check of the script by in-house team to ensure that the new line breaks worked as intended and that all hyphens, manually entered when words were broken up in the 3DS version, were removed for the Switch version.

In addition to issues caused by text file formats, the schedule was also extended by the addition of French and German text. Beyond the struggles of having to adjust UI to accommodate the sheer length of some German terms, adding these languages adds major localization programming challenges such as implementing gender tags, which are variables that call different words depending on factors such as the gender of the speaker.

These are all par for the course for French and German localization, but still add extra time to localization and QA on top of the sheer amount of resources and time required to translate a base of some 750,000 English words (originally 1.7 million Japanese characters) into two languages. We’re really excited about bringing Rune Factory to French and German players for the first time.

Adding features such as dual Japanese and English audio also added time to the localization QA schedule, as did addressing some issues present in the 3DS version. If you compare the Japanese and English audio in the 3DS versions, the English voices are noticeably quieter than the Japanese voice track. Our very understanding recording studio adjusted the volume for all English voices in Rune Factory 4 Special, even those recorded in 2013, to match that of the Japanese voice track.

We also worked out some bugs left over from the 3DS version, such as Pico saying “Happy birthday!” when she means to say “Congratulations!” to Dolce, upon Dolce learning she’s pregnant. The word for both sentiments is the same in Japanese, and there is a separate Japanese voice file for each use, but our 3DS version calls the wrong one. This was a relatively easy fix once found, but represents just one of the many variables that make checking this game a very time-consuming proposition. (Each update email I received about this issue caused my email client to fire off a day-brightening shower of confetti.)

All of these factors led to a long, challenging localization for what was already one of the most massive titles that we’ve ever published. We’re confident that we are delivering a polished, definitive version of Rune Factory 4, and we’re excited for fans and newcomers alike to get their hands on it on February 25.