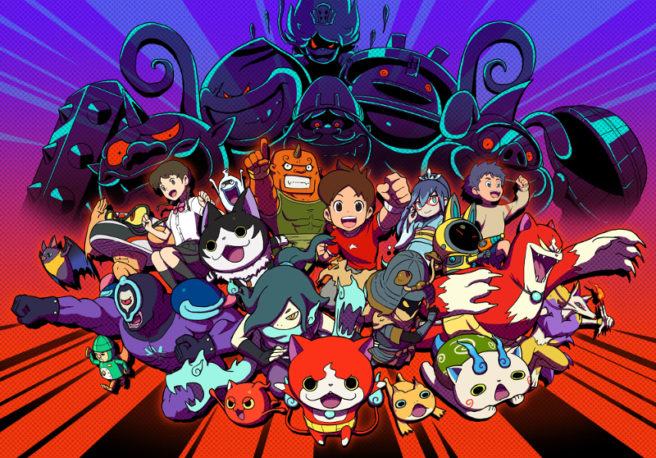 – In the newly added multiplayer mode “Purapura Blasters,” you start from the “Blasters Hell Base” in the new area “Cauldron-Boiled Hell” (Kamayude Jigoku) in the Yo-makai world
– Only yo-kai that are playable in Blasters will appear
– Choose your favorite yo-kai and take on a mission
– Up to four players can play together cooperatively, whether through local correspondence or via the internet
– You can also play on your own
– In Blasters, a great number of enemy yo-kai will appear
– While fighting alongside friends to defeat them, aim for the boss yo-kai that lies ahead
– You can exchange the Oni Orbs obtained on missions for level-ups and exclusive items
– Human characters including the Watchers will also appear in Blasters
– You can control these characters by possessing them
– When you spot a human character, possess them to borrow their strength
– In the battle at the bath house in the new “Blossom Heights” area, Nate (Keita) and the others will be wearing their swimsuits
– Jinpei Jiba (protagonist of the movie Yo-kai Watch Jam The Movie: Yo-kai Academy Y – Can a Cat be a Hero? and anime Yo-kai Watch Jam: Yo-kai Academy Y – Encounter with N) will also appear as a character you can possess
– Local/online multiplayer

– Multiple new quests have been added
– Among them is are new stories surrounding Natsume and the Yo-kai Detective Agency, as well as Shin and company
– By clearing each quest, you can befriend the yo-kai Shien and Fukurou, who appeared as bosses in Yo-kai Watch 4, as well as super powerful yo-kai like Shuka, Gentou, Hakushu, and Kuuten
– There is a quest by which you can obtain special equipment that lets Enma transform into Yami Enma

– The physical edition of Yo-kai Watch 4++ includes the “Jibanyan & Jinpei Yo-kai Y Medal”
– By scanning this in the game, you can get a special weapon themed after Jibanyan and Jinpei called “Nekoken: Jibanyuckle” (Cat Fist)
– Scan it once a day to receive other useful items
– Which will for sure be of use in Pura Pura Blasters
– In order to obtain the “Nekoken: Jibanyuckle,” you must download a free update after purchasing the game