Yooka-Laylee Switch status update, additions and changes will be included at launch 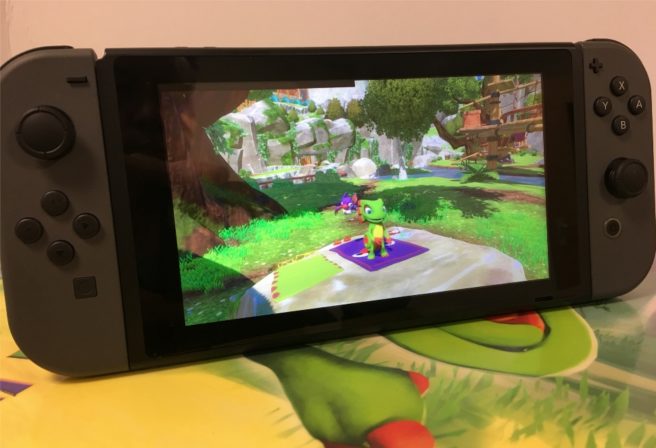 Playtonic offered a status update on the Switch version of Yooka-Laylee on its blog. The studio will be entering a testing phase on Nintendo’s platform soon, and will have a release date soon after if all goes well.

Playtonic also confirmed that “all of the important additions and changes contained in our upcoming game update will be included on day one” for Switch. Also highlighted is the ability to play Yooka-Laylee on the go, of course.

Speaking of updates, Playtonic has outlined what will be included in that big update. Continue on below for the full details.

In the months since launch we’ve been hard at work on Yooka-Laylee’s first big game update, and we’re pleased to confirm that once our test team is done trying to break it, it will be deploying later this month on PC, followed shortly after on consoles.

This rather plump update will add all manner of exciting gubbins, including the optional ability to skip dialogue faster, bypass cutscenes or reduce those pesky gibberish voices (which should please speedrunners), plus a brand new optional camera mode that gives players full control of where it’s pointed.

We’ve paid close attention to your feedback and hopefully the additions we’ve cooked up will make Yooka-Laylee an even more enjoyable experience, whether you’re playing for the first time or reptile rolling in for a second playthrough.

As promised, you can find a detailed breakdown of the updates we’ll be adding in the list below. In addition to these changes, we’ll also have an extensive list of bug fixes – which should resolve most common issues – when the game update is deployed in the coming weeks.