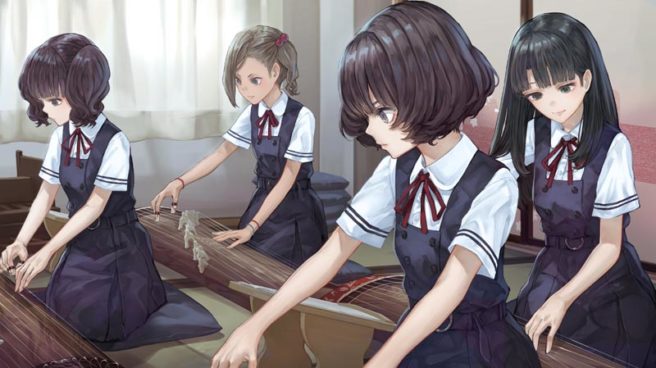 – Set in the Taisho era
– About a boarding school for young ladies that stands quietly on the outskirts of town
– The students there are “caged birds,” restricted from leaving the school grounds even on days off
– The girls shared everything, from their loneliness and joy to their teenage melancholy
– Eventually they created the “Psuedo Sisters” system
– This is a special relationship in which two girls would exchange each other’s most valued possessions and form a sister contract until graduation
– One day, two girls who formed a contract to become “Psuedo Sisters” committed a double suicide
– The two died holding the “valued possessions” said to be a symbol of the bond between them, but the teachers returned those “symbols” to their original owners and died in an accident

– Suzu’s childhood friend
– Usually reliable, but occasionally messes up
– Loves Suzu and cherishes her above all else
– Attends this school because of Suzu
– Also started playing koto music because of her
– She is good at making sweets, but is also very timid and easily gets scared

– Cheerful and energetic
– Can be quick-tempered
– Once the rising star of the track and field club, but retired after she injured her leg and joined the koto music club
– Loves the club president that welcomed her in

– Tae Kanno: adviser for the koto music club that oversees the students. Also known as Taechan-sensei
– Marino Takezawa: current president of the koto music club, who runs it under the motto, “Music is to Enjoy”; dependable senpai who believes one should enjoy playing music above all, and even taught music novice Rui how to play from scratch

– In preparation for the contest to be held after summer vacation, Suzu, Maya, Rui, and Reiko began their summer practice
– Just as summer vacation began, Suzu had a dream in which she saw an unknown “sister”
– While she did not pay much mind to it, one day a girl named Yuuka Sumeragi (the spitting image of the “sister” in her dream) transfers to her school
– Yuuka cherishes an old notebook – an old diary about the school
– Yuuka is also from a family once famous in the koto music world, and plans to participate herself in the contest to be held after summer vacation
– Yuuka listens to Suzu and company’s performance and calls it “an insult to music,” having no intention to slow into step with them
– Suzu puzzled things over with the club president regarding Yuuka, who quickly isolated herself from the club, but at a certain point, she discovered note in her cupboard that read, “I want to talk at the old school building – Sumeragi”
– Suzu saw off the president, who was excited about her “chance to talk together” with Yuuka
– What would later be discovered is the bloody body of the president who had fallen from the old school building’s second floor