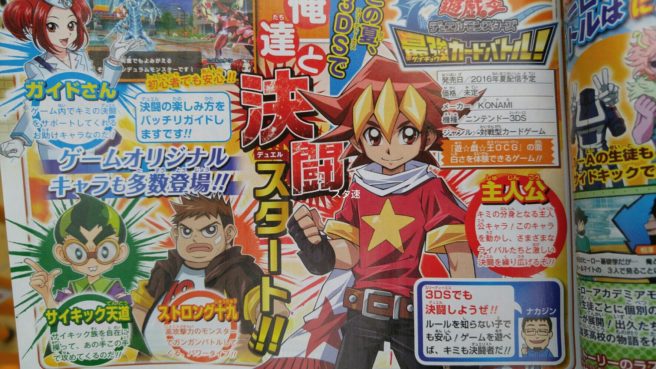 A new Yu-Gi-Oh game for 3DS, titled Yu-Gi-Oh! Saikyou Card Battle, has been revealed in this week’s Weekly Jump. The game is due for a digital release in Japan this summer. Featuring brand new characters for the game, the player will face off against numerous rivals in card battles. The scan shows the protagonist, a character named Guide-san who helps in duels, and two rivals: Psychic Tendo and Strong 19. Tendo will use Psychic types, while Strong 19 uses monsters with high attack power.

Though it is currently only announced for Japan, Konami previously announced that they were working on a 3DS Yu-Gi-Oh game for a worldwide release in the summer. Chances are high that this is that game.