Zelda: Breath of the Wild added to the series’ official timeline, but not connected

Nintendo has issued a new version of the Zelda timeline on the series’ official portal. The big addition is that Zelda: Breath of the Wild has been placed at the very end. However, it is not connected to any of the three timelines.

Here’s a look at its placement on the timeline: 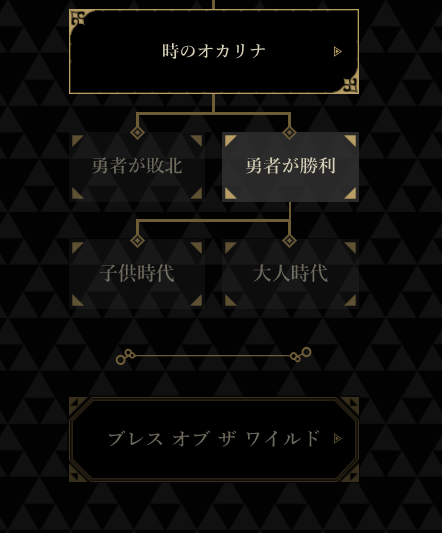 Last year, Famitsu asked the developers of Zelda: Breath of the Wild about the game’s placement in the timeline. This is what was mentioned, as translated by Siliconera:

Eiji Aonuma, series producer: Well of course it’s at the very end. But, I get what you’re asking, it’s which timeline is it the end of?

Hidemaro Fujibayashi, director: That’s… up to the player’s imagination, isn’t it?

Aonuma: Hyrule’s history changes with time. When we think of the next game and what we want to do with it, we might think, “Oh, this’ll fit well”, and place it neatly into the timeline, but sometimes we think, “Oh crap”, and have to change the placement. Actually, the decided history has been tweaked many times. (laughs)

Fujibayashi: Lately within the company, a term called ‘New Translation’ has cropped up. (laughs) Strictly speaking, we don’t change it, but rather new information and truths come to light.

Famitsu: I see, so the way to interpret the lore of Breath of the Wild is still up for academic debate. (laughs)

Fujibayashi: That’s why you should pay attention to future studies as well! Please look forward to it. (laughs)

Other than Breath of the Wild’s addition, there’s a change in positioning for the Fallen Hero timeline. Link’s Awakening now sits before the Oracle games instead of afterwards. This would disprove the theory that Link from A Link to the Past died at sea.

You can check out the official Japanese Zelda timeline on Nintendo’s website here.,/b>