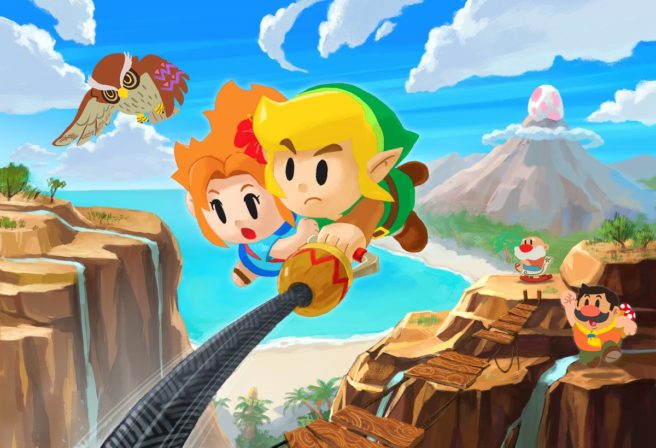 Nintendo has shared a new Zelda: Link’s Awakening blog post from Ryo Nagamatsu, one of the game’s composers. Aside from commenting on why the team didn’t opt for orchestrated music this time around, we get to hear about how the title theme track was created – including a couple of versions that were scrapped.

Hello! This is Ryo Nagamatsu, the person in charge of music composition and arrangement for The Legend of Zelda: Link’s Awakening! I would like to talk to you about the approach we took for the music in this title!

In Zelda games, we often use orchestrated music, and we also have a tendency to make the music more dramatic by adding elements to it when there’s already an original version of the song. However, since a large orchestra wouldn’t really fit the visuals of this title, I kept it to a small one this time. At the same time, we still needed music with ‘oomph’ for a Zelda game, so I initially created the title music using brass instruments.

What do you think? The music is not orchestrated, but it still has that ‘Zelda’ feel.

The story and characters appearing in Link’s Awakening are ‘unusual’ when the Zelda series is concerned, so we had to diverge from the usual mindset we have for Zelda titles. After numerous trials and errors, this is what we created for the game’s title music.

It’s quite a simple composition, isn’t it?

The advantage of playing one melody with one instrument is that changes in expression or how the melody is played are easier to feel because they result in a more direct change in the music. As a result, we can make the melody wonderful on its own without tweaking it or making the arrangement more extravagant. Old games only had few tones anyway, so in that sense it’s really a straightforward remake. During the testing stage, we actually went as far as this (*laughs*).

Last but not least, there are many other pieces of music where for some parts we used the original audio source. ‘Tal Tal Mountain Range’, famous from the original game, and many dungeon tunes in different places can be heard throughout!

Try listening carefully for these parts of the music if you’ve already played the original game, and if this is your first time, I hope you will enjoy all the different kinds of music!

I hope you really enjoy The Legend of Zelda: Link’s Awakening!

The Legend of Zelda: Link’s Awakening is out now on Switch.