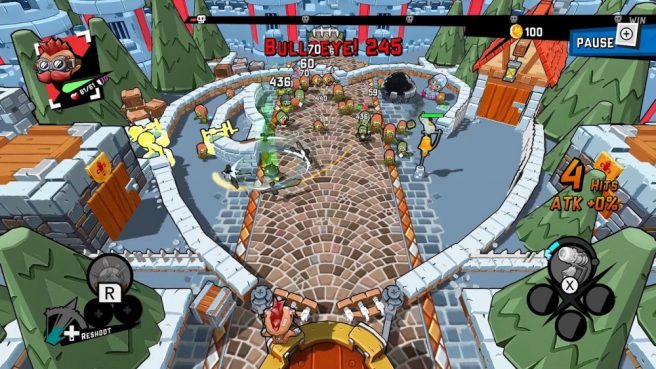 Ahead of tomorrow’s launch, gameplay has emerged for Zombie Rollerz: Pinball Heroes. 24 minutes of footage is available in a video that just went live.

Zombie Rollerz: Pinball Heroes is the ultimate mashup of classic pinball and zombie defense with rogue-like elements to ensure no two playthroughs are ever the same!

Shoot, slam and smash your way through hordes of adorkable zombies in this fusion of pinball, point defense and zombie horde gameplay.

Select from 10 different heroes, each with their own special ability to shoot zombies in hilarious ways. Discover and unlock hundreds of helpful powers and items to boost your hero.

Rogue-like elements: 4 worlds wait to be explored by you via the overworld map. Random generation ensures that no playthrough is the same. You must adapt at each and every turn if you want to rid all worlds of the rampaging zombie plague – pinball-style!

Better than ever! Zombie Rollerz: Pinball Heroes is the new and improved continuation of the famous original game that fascinated millions on mobile devices already!

*Fight 50 different types of adorkable zombies by pinballing through a cartoony world
*Addicting mashup of classic pinball and zombie defense
*Epic zombie boss fights that will test your skills
*Random generation of 4 different worlds ensures that no playthrough is the same
*More than 300 trinkets and skills for you to unlock, including legendaries!

Have a look at the Zombie Rollerz: Pinball Heroes Switch gameplay below.