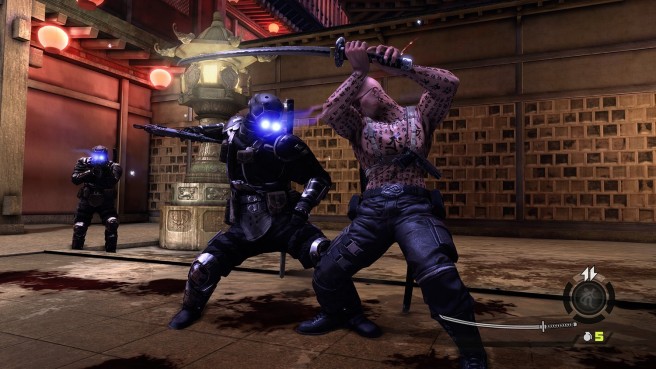 Famitsu provides an update on Devil’s Third this week. Along with the magazine’s report, there’s also an interview with creator Tomonobu Itagaki.

First, here’s what Itagaki had to say about multiplayer:

“There are things like diplomacy chat that only clan leaders can use, so you can have conferences with other clans. I’m a military enthusiast so there are also many political elements in the game.”

Famitsu then asks about being able to enjoy just the multiplayer:

“Of course. You can [enjoy the multiplayer] even without playing the single-player game. Even so, the single-player is packed with Itagaki-like things, so I’d like you to try it. In order to make both the multiplayer side of the game and the single player side of the game enjoyable, each of them required an amount of quantity, quality and scope. There are these two parts of Devil’s Third. That’s why it took time [to make the game].”

Moving away from the gameplay-side of things, Itagaki spoke about Devil’s Third in more general terms:

“When I became independent and thought what I’d create next, I had a strong desire to challenge myself with new things. Therefore I decided to create a completely new shooter game by using all the skills I have gained from making action games and fighting games – so Ninja Gaiden and Dead or Alive fans alike would want to play it.”

Devil’s Third has been in development for a very, very long time. Originally, it was announced in 2010. Itagaki could have given up along the way – especially when its first publisher THQ closed – but he persevered. In his interview with Famitsu, Itagaki explained why he continued with development:

“I didn’t want to betray fans. I didn’t want people to throw away their anticipation. The game is a grand sum of the work from all of the developers, so I really hope you pick it up. I think the game will become a breakthrough in the industry and take shooters to the next level.”

Devil’s Third launches on August 28 in Europe and August 4 in Japan. A North American release is also planned.