Kirby and the Rainbow Curse devs on the art style, choosing Waddle Dee for multiplayer, more 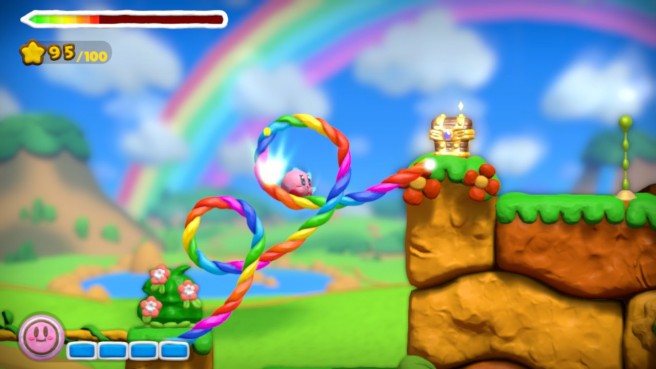 This month’s issue of Nintendo Dream has an interview with the developers behind Kirby and the Rainbow Curse. The Japanese magazine asked plenty of questions, which brought about several interesting answers.

Nintendo Dream starts off by noting how Rainbow Curse is the first Kirby title for Wii U. Given that, the publication was interested to know why the game follows the system of Canvas Curse and isn’t a traditional entry.

That elicited the following response:

When we saw the Wii U GamePad for the first time, we thought it could be interesting to use the different roles of the GamePad and TV in multiplayer. From there on, we came up with an idea of using the Wii Remote to control Waddle Dee and the GamePad to draw footholds. And the system of Kirby Canvas Curse fit that, so we used it. The result, after applying everyone’s voice, was a very lively game.

Next, there’s some talk about why a clay world was chosen as the setting. It’s explained that Kirby Canvas Curse introduced “a painted world”, but the team thought about powering up the presentation for this game and making the art three dimensional. “Freely drawing the rainbow line also became a twist of sorts, since there are many changes throughout the unique clay world,” the developers said.

Continuing on the topic of Kirby and the Rainbow Curse’s art style, Nintendo Dream asks how it looks so realistic. The developers say that characters appear small in stages, but even the normally invisible parts of character models were made properly, which can be seen in the Figure Room. It was also decided to drop the frame rate of animation to give it an authentic look of clay.

Some other interesting comments were shared with regard to multiplayer. When asked why King Dedede/Meta Knight aren’t available and instead has extra players controlling Waddle Dees, the developers said:

Kirby and the Rainbow Curse launched in Japan on January 22. The game is due out in North America on February 20, and later this year in Europe.