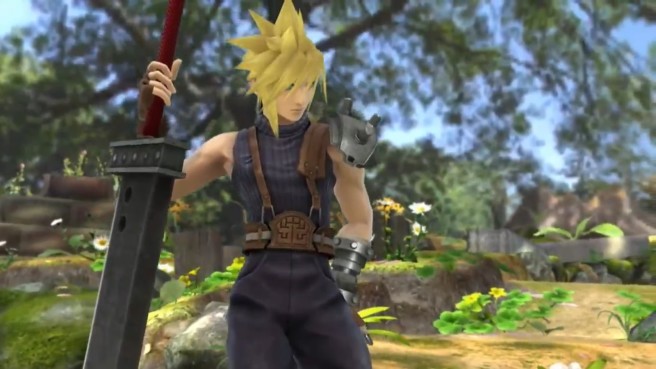 This week’s issue of Famitsu features several dual creator interviews. One of these has Smash Bros. director Masahiro Sakurai and well-known Square Enix developer Tetsuya Nomura conversing. As expected, the conversation was focused around Cloud’s appearance in Super Smash Bros. for Wii U/3DS.

Sakurai mentioned that roughly 25 percent to 33 percent of fan requests in terms of Final Fantasy characters in Smash were for Cloud. Although Sakurai felt “it would be impossible” to make this happen, he reached out in any case.

Here’s a notable excerpt from the discussion, courtesy of Source Gaming:

Nomura: When we first talked, I asked “are you sure you’re okay with Cloud?” He’s not a character from a new game, after all.

Sakurai: But on the other hand, if you think about who to add from Final Fantasy, it’s hard to come up with a choice that’s not Cloud. We could have used Terra or Bartz, protagonists in their own right, but I feel like there would be some people who wouldn’t know who those characters are.

Nomura later points out that, “if you look carefully at Cloud’s clothing, you’ll see it’s not the original version”. Instead, it comes from Dissidia: Final Fantasy. Sakurai added that you wouldn’t notice this right away, and in terms of specifics, the belt design is different. There was ultimately a compromise of sorts as just using the Dissidia character model would make him look out of place given how slim he appears in that game, but using Cloud from Final Fantasy VII would mean a smoother face and polygonal look.

Lastly, Sakurai stated that he wanted to make Cloud “relatively easy to play” since lots of users would likely try him out. There were struggles with establishing his image, however.

A notable final excerpt from Sakurai:

“He has a big sword, so let’s make him swing big…that’s not enough. So, using the consecutives strikes that you see in his side smash as the lynchpin to his design, we made his sword swings fast, but with enough lag so that he has periods of vulnerability, and attempted to balance him that way. …He might seem fast, but there are parts of him that actually aren’t, and he isn’t very good in the air. Adjusting things like that is how we balanced him.”