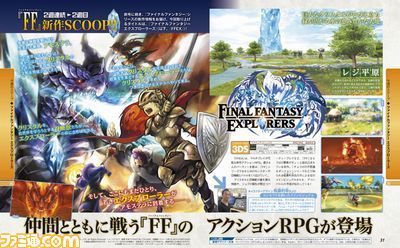 This week’s issue of Famitsu has a followup report on Final Fantasy Explorers. You’ll find the latest information from the magazine below.

– More jobs confirmed
– Can play as the Dragon Knight, Paladin, Thief, Ninja, Red Mage, Time Mage, and Bard
– Assign a maximum of eight abilities to each button for use in battle
– Famitsu describes Final Fantasy Explorers as a “lite” version of Final Fantasy XIV or Final Fantasy XI
– Character positioning is important
– Square Enix is including an ability chaining system
– Once mastered, job-specific abilities can be used within other jobs
– Ability costs vary depending on which job a give character currently has
– Ex: Black Mage will have black magic costs halved
– Takes place on an island with various locations
– Can walk to all of its adjoining lands
– Can befriend monsters when you defeat them
– A monster training element is being included
– Since you have four max player slots, you can fill the remaining slots with monsters
– Ex: 2 human players and 2 monster players
– Said to last between 100-200 hours
– Square-Enix is said to be developing the game with intention of expanding it into a proper action-RPG sub-series for Final Fantasy
– Local and online co-op is supported