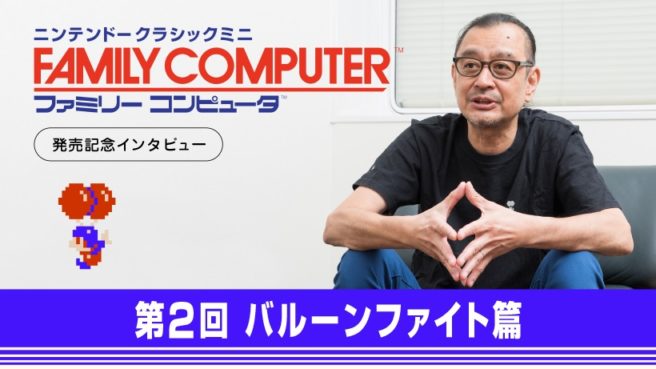 Nintendo recently published another new interview on its Japanese website to promote the NES Classic Edition / Famicom Mini. This time, Yoshio Sakamoto of Metroid fame sat down to talk about Balloon Fight. Nick Mosier translated the piece, which had some interesting talk about how the game was made, memories of the late Nintendo president Satoru Iwata, and a GBA hardware idea that was cancelled after making it to the mock-up stage.

We’ve picked out some notable excerpts from the interview below. You can read the full translation here.

[— If you can draw, you can make a game —]
– The arcade version of Ballon Fight was released around November of 1984 and the Famicom version came out in January the following year. You had been in the company for around three years a that point, right?

Sakamoto [S]: I entered the company in 1982 so that sounds right.

– What kind of projects were you involved with before Balloon Fight?

S: I originally entered the company as a Game & Watch designer. At first I helped with them but also made some Game & Watch games myself. … I made titles like Snoopy, Donkey Kong Circus, and Mario Bombs Away using that panorama screen.

– Ah, I see. So after Game & Watch what kind of games were you involved with?

S: I worked on an arcade game called Vs. Wrecking Crew. My boss at the time was Gunpei Yokoi and he believed that if you could draw, you could make a game so I was drawing and doing game design simultaneously. Of course, I was also consulting with Mr. Yokoi too.

S: That was when I learned to draw with pixels.

– And after that you were involved with Donkey Kong Jr.

S: Yup. I worked on the logo, the title screen, and drawing Donkey Kong trapped in a cage. I was able to help out Minamoto a bit.
[— There’s no way I can draw a soap bubble —]
– So after that, it was decided that Balloon Fight would be made. What originally brought this game idea about and got development started?

S: Mr. Yokoi said, “How about making a game that feels like you’re floating and has a combat element too?”

– He also said, “If you can draw then you should be able to make a game.”

S: Exactly. So it was decided that I would draw and do the game design. SRD was in charge of developing the arcade version and the Famicom version was developed by Mr. Iwata who was working at Hal Laboratory at that time.

– So the arcade version and Famicom version were developed simultaneously?

S: It was roughly at the same time I think. I’m not totally sure though.

– It was 30 or so years ago so there are probably a lot of things you’ve forgotten since then, eh?

S: Yeah, that’s for sure. There are some memories from the game’s development that are still clear to me to this day as well. You know the bubbles that come up when an enemy falls into the water?

– Yeah, and when you collect them you get points, right?

S: One day Mr. Yokoi suddenly said, “Make bubbles appear,” so I made them but at first I thought there was no way I could do that.

– Why did you think you couldn’t do it?

S: The Famcom’s graphics were so simple that I thought there was no way I could draw it.

S: Mr. Yokoi scolded me by saying, “You’ve already said that you can’t do it before you even tried.”

S: We had an easy to use development tool at the time that we could use to experiment and Mr. Yokoi who was watching from the side said, “So you weren’t able to do it?” (laughs) I was able to do it easily so I had to reflect for a moment. I decided that wasn’t going to say I can’t do or it’s impossible anymore.
[— Mr. Iwata encountered a silver-haired gentleman —]
– On Balloon Fight, Mr. Yokoi was the producer and Mr. Iwata was in charge of programming the Famicom version. Do you have any memories relating to those two?

S: I do. There are two stories that I remember very clearly. One was told to me by Mr. Iwata and the other is one I saw with my own eyes. Shall I start with the story from Mr. Iwata?

S: When Balloon Fight was being made, Mr. Iwata came to Kyoto and worked in a room provided by Nintendo doing various things.

– At that time, Hal Laboratory wasn’t located in Yamanashi but in Tokyo so he would come to Kyoto and do his programming work, right?

S: I don’t think he was always in Kyoto but he did come occasionally. So when Mr. Iwata was sitting in his room doing his work, a silver-haired gentleman suddenly entered and sat down without saying a word. He was constantly checking it out as it was being developed.

– And just who is this silver-haired gentleman?

S: So Mr. Iwata was probably thinking, “What should I do?”

S: That’s right. At that time they had been acquainted yet. Mr. Yokoi sat there for a long time trying out the game, listed off what to fix, and quickly left the room. Mr. Iwata thought, “Who was that guy?” and finally asked us. We figured it had to be Mr. Yokoi. I heard that directly from Mr. Iwata.

– So that kind of thing actually happened?

– Definitely. Sitting in silence playing the game then pointing out problem areas sounds very much like Mr. Yokoi.
[— Balloon Trip was made in three days —]
S: So here is a story I saw unfold for myself.

S: Just as we were making Balloon Trip mode…

– Balloon Trip is the side-scrolling single player mode in Balloon Fight. I heard Iwata was able to make it in only three days.

S: Yeah, that’s it. Balloon Trip was an idea Mr. Yokoi had mentioned and Mr. Iwata brought it to form in three days. Around the time it was pretty much complete, Mr. Yokoi joined myself and Mr. Iwata. At this point they had been acquainted so Mr. Yokoi said, “Thank you for your hard work,” and began to play it for a long time as we expected.

S: After he had finished playing through it, he said what he wanted fixed but it wasn’t something that could be easily done. In those days, programs were worked out on paper and modifications would be made after consulting a bundle of papers about as thick as a phone book.

S: So even if you wanted to make a tiny change it could take an hour. So after Mr. Yokoi said what he wanted changed, he pulled up his own chair and went to grab some coffee to drink. Just as he made his request, Mr. Iwata said, “Wait just a second,” and started typing. Then it was done.

S: I was surprised he could make the changes that fast. Mr. Yokoi was also surprised when he said, “It’s done already?” I remember that well, even today.

– That really is incredible.

S: Mr. Iwata knew the whole program from front to back.

– It is often said that Mr. Iwata had a natural gift for programming. When I hear stories like that I think it must be true.

S: It really is.
[— A ten year long dream comes true —]
– By the way, what are your impressions of the Balloon Fight that is on the Classic Mini?

S: I actually said that we should make something like this 10 years ago.

S: I said it would be interesting to make a Famicom shaped Gameboy Advance that played games on the television. It got all the way to the mock-up stage.

– There was a Famicom 20th anniversary series released for the Gameboy Advance.

S: That’s right. The idea flowed from that. I occasionally have free time.

– What was the size compared to the Classic Mini?

S: It was around the same size.

– So you would put in Gameboy Advance games and play them?

S: Yes. I didn’t get that far though. I just made the systems appearance… But the box was also made.

– You made the box? The Classic Mini’s box also looks like it’s from the era of the original Famicom which is pretty cool.

S: For sure. We also talked to the artwork people 10 years ago and thought about how small the package was.

– Maybe you jumped the gun a little bit on that plan. (laughs)

S: Perhaps it was a bit too fast. It didn’t become a reality like something that went to the warehouse.