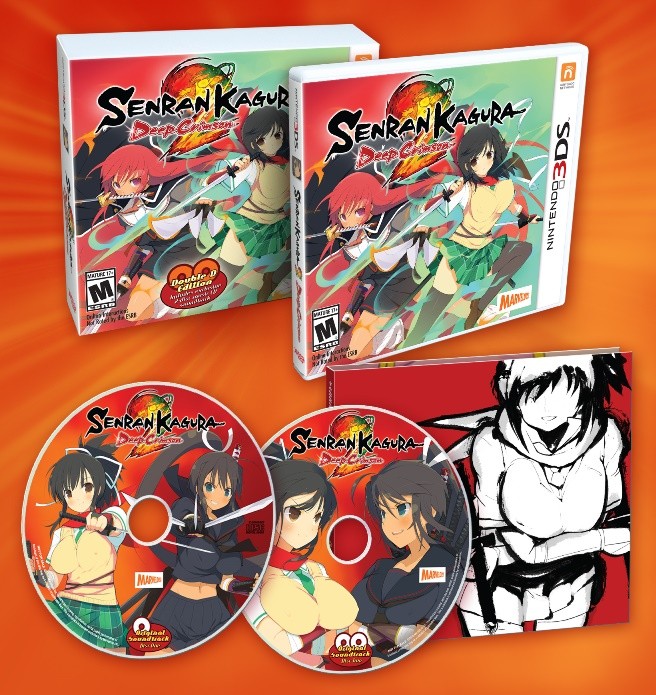 When Senran Kagura 2: Deep Crimson launches, players will be able to pick up the “Double D Edition”, which comes with two music discs containing a total of 60 tracks and representing the game’s entire score. Pricing is set at $49.99. Senran Kagura 2 will also be sold on the eShop for $39.99.

XSEED is celebrating today’s news with a discount on Senran Kagura Burst. It will be on sale through September 14 for $19.99 (normally $29.99). Those who have Burst save data on their SD card will receive Ikaruga’s brother Murasame as a playable character for free. Normally, it will be sold for $4.99 as premium DLC.

An official overview and the latest trailer for Senran Kagura 2 are posted below.

Once again showcasing the series? trademark high-flying, clothes-ripping battle mechanics, SENRAN KAGURA 2: Deep Crimson follows the events of SENRAN KAGURA Burst, sending all 12 of the original cast members on another supernatural martial arts adventure through modern Japan. For the first time in the series, shinobi can fight in pairs, covering each other’s backs and combining special techniques as needed, or fight alone to give their partners time to recover after bouts of intense combat. One player can control both team members, switching back and forth at will, or two players can fight side by side in local or online co-op mode.