Splatoon staff talk about the Inkling design, more on the Squid Sisters, and other topics 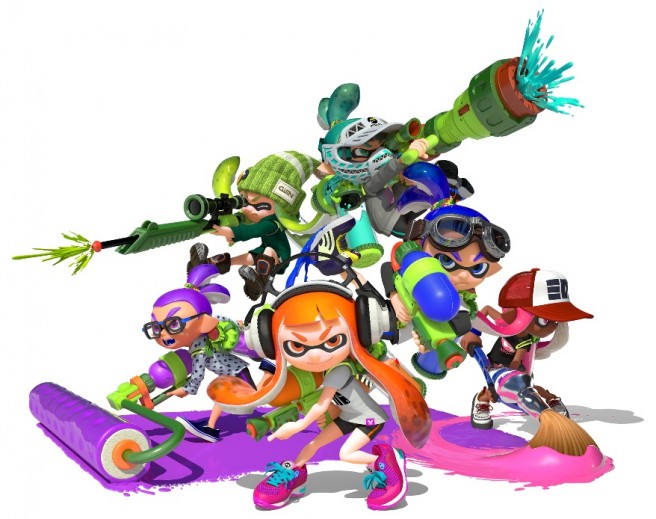 In a recent issue of Famitsu, the magazine caught up with several of the developers behind Splatoon. The lineup included producer Hisashi Nogami, art director Seita Inoue, and designer Keisuke Nishimori. Toru Minegishi and Yuki Tsuji, who worked on the game’s sound, were also in the discussion.

We’ve been poking through Famitsu’s interview again, and came across a few more interesting excerpts. We now have those ready to share.

During the interview, Famitsu asks if things like the characters’ “heads tall” ratio were firmly decided when characters were still rabbits. The developers were basically asked about body proportions and how big the head was going to be compared to the body as a whole.

Inoue: “That wasn’t changed to an extent. As this is an action game, if you don’t make the action easy to see to a certain degree, it feels out of touch, so it was decided to have big legs and hands.”

Nogami: “There was also a reason to have a low ‘heads tall’ ratio. You can tell when a character is covered in ink from an attack because the head is big. It isn’t so just to make them look cute.”

Another topic brought up during the interview was the design points of the Inkling boy and girl. Inoue mentioned that they wanted to make elements such as the eyes and tentacles easily visible, but the form and silhouette were given a great deal of attention.

Inoue and Nogami carried out the following conversation:

Inoue: “Having a broader pelvis than shoulder width and the athlete-like form give an impression of a sporty character who is satisfied with his/her real life (laughs). The Inkling boy and girl were drawn as 17-year-olds at the time of designing and they have an ‘I’m cool’ attitude. It seems like 17-year-old girls think they’re the strongest beings alive. I thought like that, too. ”

Nogami: “It’s like there is nothing scary in the world (laughs).”

Inoue: “That also fits well with the setting of Inklings being mischievous and shooting ink. That age is the last moment for seeing painting ink as something cool. If Inklings were a little older, it would be a bit childish. The messing around was designed to look like a sport. Later the corners of the Inklings mouth and the bottom of their eyelids were raised. As a result, they weren’t quite that cute looking and they got a cheeky mood to them. We thought a great deal of that kind of image.”

Inoue: “The girl and the boy were drawn with a same kind of image in mind, but when comparing the boy and girl, the boy has a somewhat obedient image. However, they share the same age.”

Nogami: “When it comes to the setting, they are 14 years old, but they were designed as having a mood of 16-17-year-olds.”

Keeping in line with the discussion about the Inkling design, Famitsu asks if the black areas around their eyes was decided on from the start, and the magazine points out how they are reminiscent of the Bloopers from Mario. Inoue noted that they aren’t there because of the Bloopers, and the design was instead created “to give an image of having parts below eyes painted black with make-up, like punk rock musicians and such do.” While some people have said that the Inklings are similar to Bloopers and he understands the comparisons, Inoue “thought that a bit of a rough attitude, similar to just debuted rock singer, fit this game.” This is how that mood turned into an image.

We also have some additional comments about the Squid Sisters. Inoue and Nogami shared the following words about the two characters:

Inoue: “The world of Splatoon takes place 12,000 years after the present time and the Squid Sisters are those who receive messages from 12,000 years ago. Like there would be a discussion ‘rice or bread?’ in current time, and those words fly to another planet and bounce back for them to receive. Those divine messages come from kami-sama [kami means a god, sama is a honorific like -san].”

Nogami: “Kami-sama is written as ‘paper’ when using kanji [kami has several meanings, two of which are a god and paper], so the topic of Splatfest comes as a fax-like paper. That’s where the name kami-sama comes from (laughs).”

Later in the interview, Nogami mentions that Tsuji created the Squid Beatz minigame by himself. It all started when, one day, he couldn’t work for roughly an entire day because of the circumstances with the sound development. This was also when different members of the team proposed plans for mini-games that can be played while waiting for matchmaking. He used the day to make a mini-game in which you can play while listening to the background music. When the mini-game was showed in playable form to the team member responsible for all of the mini-games, that person thought highly of it and the proposal was accepted. Once it received a brush up, the mini-game turned into the way it is now.

Finally, Minegishi talked about how the tunes in Octo Valley are like techno and how they differ from the music in Turf War. Note that the second paragraph spoils some of the fun regarding the final boss.

“I created all of them exactly as something similar to techno. First I thought to completely change the musical direction so it would be easy to recognize that they are different from the types of songs used in Turf War. Octo Valley has a feeling of being alone behind closed doors, even with Cuttlefish giving orders, and that is in contrast with noisy and hectic sports-like image of Turf War. Also it’s like the Octo side broadcasts their music in order to control the many Octarians.”

“DJ Octavio and his direct subordinates compose the music. Octarians somehow cross talk into the protagonist’s headphones. The ‘zazzazzazza’ rhythm gives an image of controlled Octarians marching and that mechanical feeling is put together in techno.”

This wasn’t all from Famitsu’s interview. For our initial round of translations, give this post a look.