Tons of Mario & Sonic at the Rio 2016 Olympic Games Wii U screenshots, details 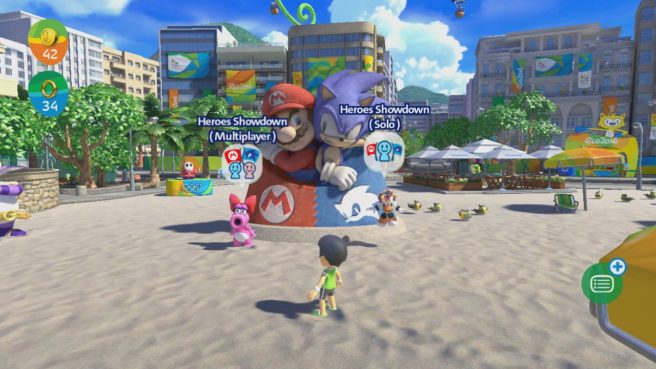 With the Wii U version of Mario & Sonic at the Rio 2016 Olympic Games scheduled to drop in less than two months, Nintendo decided to send out a bunch of new screenshots for the game. On top of that, the latest announcement shares some details about the game. All of today’s content is posted below.

4th May 2016 – The worlds of Mario and Sonic come together once more for 17 exciting events in Mario & Sonic at the Rio 2016 Olympic Games™, arriving on Wii U across Europe on 24th June. Taking place in Rio de Janeiro, host city of the Games of the XXXI Olympiad, the latest instalment of the series features over 30 playable characters, the ability to play as your Mii, and plenty of frantic four-player multiplayer action to enjoy with friends and family, including the new Duel Events, which give familiar sports a classic Mario & Sonic twist.

Rugby Sevens is one of three sports, along with Football and Beach Volleyball, that comes with its own Duel Event. The action’s powered-up, familiar items like Bullet Bills and Chaos Emeralds are allowed, and chaotic multiplayer matches are guaranteed. In Duel Events, players build up Duel Points by pulling off actions like tackling, spiking or shooting, then have to score a try, point or goal to add these Duel Points to their total score. Last-gasp turnarounds and severe drubbings on an unprecedented scale await!

Players can also vie for gold medals in classic Olympic Games events like Boxing, Archery, and the 100m sprint, using either the Wii U GamePad in single-player, or with Wii Remote button controls in multiplayer. All events take place in venues modelled after the real-life venues of the Olympic Games, bringing an authentic touch of Rio to the proceedings. Rhythm Gymnastics (with clubs) and Rugby Sevens – the latter making its debut at the Rio 2016 Olympic Games – are also playable for the first time.

Alongside the new events comes the new Heroes Showdown mode: an addition for only the most dedicated Mario and Sonic fans out there, as it’s unlocked after achieving first place or being in the winning team in all 17 player events in single-player, or by winning the Bronze Medal more than seven times in tournaments. Competitors join up with Team Mario or Team Sonic and battle it out against the other side in knockout rounds. Events are picked at random for a real test of all-around skill, and each round a character from the losing team is knocked out until either all members are knocked out, or Team Captains Mario and Sonic are eliminated, so it’s all on the line to be the last team standing.

Over 30 playable characters from the Mario and Sonic series appear, including some that are exclusive to certain events. Sporting hopefuls can put themselves in the game as their Mii, and take part in tournaments for each event. Coins and rings earned through gameplay can be used to buy additional costumes from the Mario series or Sonic series respectively.

Additional special tournaments can be accessed through the use of amiibo figures, which can be used after completing 25 tournaments. By tapping a Sonic amiibo to the Wii U GamePad, the Sonic League will begin, pitting a player’s Mii against characters from the Sonic series. Meanwhile, the Mario League can be played if any Mario amiibo is tapped, and will see players squaring off against characters from the Mushroom Kingdom. A special Mario or Sonic Mii costume will be earned for winning their respective leagues, while scanning in any other amiibo will reward the player with either coins or rings to use at the Item Stand for a chance to win additional costumes.

With 14 official Olympic Games disciplines and three Duel Events, over 30 playable characters and the ability to play as your Mii, and local multiplayer for up to four players, Mario & Sonic at the Rio 2016 Olympic Games™ will offer everyone a chance to go for the gold when it comes to Wii U on 24th June!