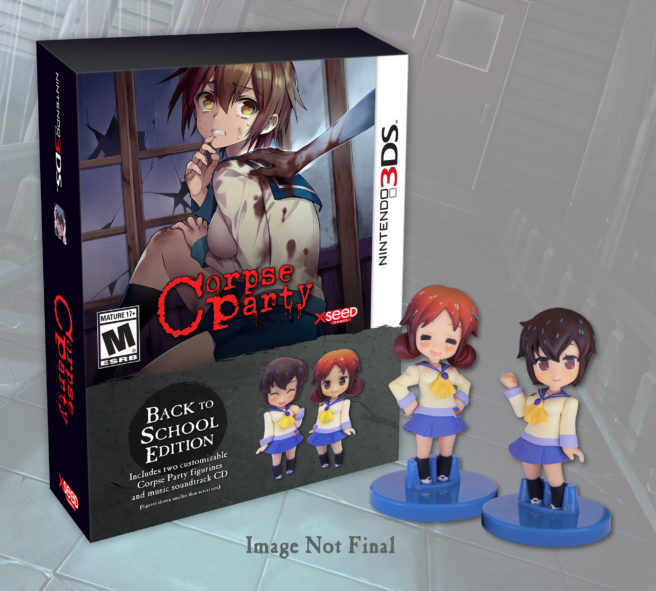 Corpse Party will be sold at retail as a “Back to School” edition for $49.99 and digitally for $29.99. It’ll come with miniature figurines of Naomi Nakashima and Seiko Shinohara as well as a soundtrack CD featuring nearly 80 minutes of music from the game not previously featured on the ‘Songs of the Dead’ compilation, including three tracks exclusive to this version.

XSEED will launch Corpse Party on 3DS this summer. Take a look at a brief teaser trailer and an overview below.

Remastered from the 2011 PSP game, the Nintendo 3DS rendition of Corpse Party will feature redrawn, high-resolution character sprites, newly arranged music tracks, and 3D art stills, as well as four new Extra Chapters exclusive to this version that provide insight into lesser-shown characters and plot elements previously left unexplained. This title has been rated “M for Mature” by the ESRB.

In Corpse Party, players take control of a group of Japanese high school students who inadvertently engage in a pagan ritual and find themselves inexplicably transported into a whole other space: an inescapable echo of a long-since demolished school building where a series of gruesome murders once took place. They must now evade the grasp of the tortured souls who roam the halls of the doomed Heavenly Host Elementary School, lest they join the ranks of the dead themselves.

As players advance through Corpse Party, they will strive to avoid the game’s more than 20 “wrong ends,” in which tragedy takes over and one or more characters suffer a grim demise. Whether buried alive, forced to swallow scissors or cannibalized by a friend, wrong ends are often as disturbing as they are morbidly intriguing. To advance through the game, players must reach the one true ending in each of the game’s five chapters to unlock the next leg of the journey. The game features several “true” endings depending on how many characters survive the journey through the haunted school – and at Heavenly Host Elementary, survival is no easy task.