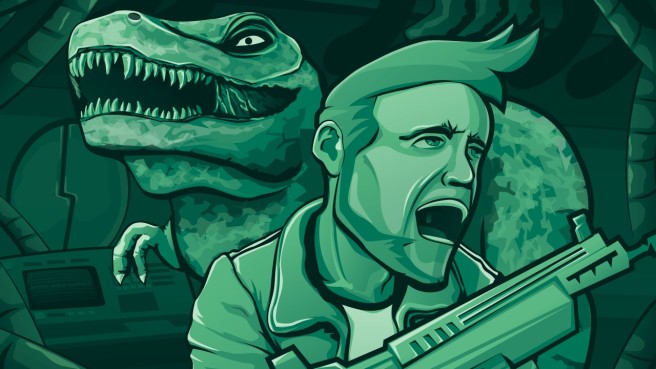 The Minotaur isn’t the only new indie game coming from Ratalaika Games. At some point in the future, the indie developer will also have Alien Dinosaurs on the Wii U and 3DS eShops, plus other platforms.

Alien Dinosaur is an arcade shooter in which players will take on enemies in different chambers, trying to escape from it. Ratalaika says that the following features are planned:

– Unique retro style action: Thanks to our artist and the simple mechanics, makes out game in something different, retro but fresh and with quick action.

– Story: Due to long hours spent watching low budget cinema and our madness, we have decided to create an unexpected story

– Develop your character: As you progress in the game you can change your character, so every time you play, it will be stronger and it could fight better against the T-rex

– Survival mode: Show who is boss and send all those enemies back to their graves. Survive as long as you can, kill everything you can and become a legend.

– Weapon arsenal: The player has a huge variety of weapons. From basic weapons like a gun or a shotgun to a mop or a fork, even laser weapons, there always should be a laser weapon on every house.

A release date for Alien Dinosaurs hasn’t been announced. While you wait for the game, view a trailer below.