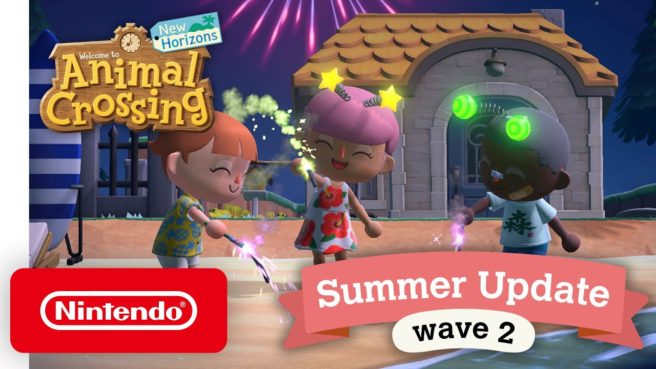 The first part of the update will add fireworks shows, which take place each Sunday. A dreams feature will also be made available in which you can visit other islands, though nothing there is permanent. And most significantly of all, players will finally be able to back up their save data if they’re a Nintendo Switch Online member, though you’ll have to go through Nintendo customer service to recover anything that’s lost. Nintendo is working on a function to move users and save data to another system, which will launch later in 2020.

Animal Crossing: New Horizons – Summer Update – Wave 2 goes live on August 30. We have more details and a trailer below.

A dazzling array of colors are ready to burst in the night sky above your island abode while the calming waves of the sea lap at the shore. Ring out the end of summer with weekly fireworks shows during the month of August when Summer Update – Wave 2 arrives to the Animal Crossing: New Horizons game for the Nintendo Switch system!

Available starting on July 30, the free Summer Update – Wave 2 will add the following features to the game:

Fireworks Shows – Enjoy atmospheric fireworks lighting up the sky above your island every Sunday in August at 7 p.m. Get in the spirit by redeeming Bells for raffle tickets in the plaza to get various festive items that you can use. Put your personal spin on the fireworks display by using your own custom design pattern to see it shot in the air as a firework in the sky!

Dreaming – You can now choose to take a nap in any bed placed in your home. While dozing off, you may find yourself in a strange realm where you’ll be greeted by Luna. Luna offers visits to other islands as a dream, and with her help, you can share your island as a dream with others too. She will grant those who share their island a “Dream Address” which players can exchange and use to visit each other’s island in a dream. In dreams, nothing is permanent because nothing you do is saved, so explore to your heart’s content.

Island Backup & Restoration Service – Nintendo Switch Online members can enable the new island backup service, which automatically uploads island and user save data to the internet at certain times. If your Nintendo Switch system is lost or damaged, you may be able to recover your island paradise as long as you’ve enabled island backup. In the event of loss or damage, contact Nintendo Consumer Support about restoring the island and user save data on your new or repaired Nintendo Switch system. After your island data and individual player data is restored, you can get back to building your island community! Additional details can be found on the Nintendo Consumer Support page when the update goes live. The island backup feature is separate from the Save Data Cloud functionality offered for select Nintendo Switch games through Nintendo Switch Online. A function specific to Animal Crossing: New Horizons to move users and save data to another system is planned for later this year. Details will be announced in the future.

Take some time to relax this summer and remember to have a blast at the fireworks shows on your island getaway in Animal Crossing: New Horizons. Coming up next is the free Autumn Update. We hope you look forward to it!