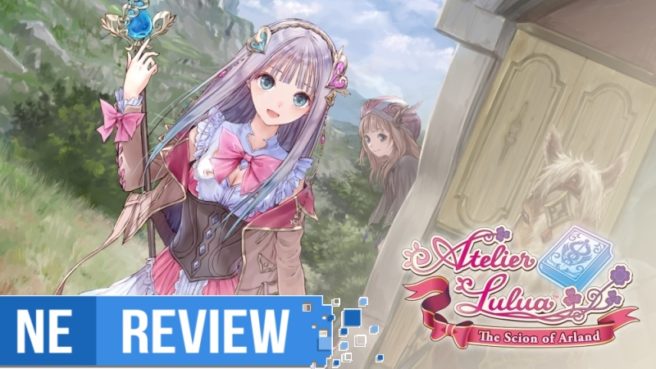 Since 1997 the Atelier series has seen yearly installments that have given us a world of magic and alchemists alongside the adventures they go through. Each game has followed a new character and her evolution into becoming a legendary alchemist while learning about themselves along the way. Atelier Lulua: The Scion of Arland continues that trend but also changes things up in a lot of ways compared to other titles by introducing fresh new mechanics with its synthesizing, exploration, and battles, while also incorporating quality of life enhancements from the recent entries in the series.

While each Atelier title can be perceived as standalone with no need to play the others, the subtitles of each game do share a part of the world in each alchemist’s adventure, typically in a loose trilogy. Atelier Lulua: The Scion of Arland is a bit of an anomaly because this marks the fourth of the Arland series, which initially had concluded in 2012 in the west. For fans of the long running series, it’s a treat to revisit the story surrounding the Arland Republic, but even for newcomers, as it is with other Atelier titles and games such as Final Fantasy and Dragon Quest, Lulua can serve as a great entry point for those looking to get into the series for the first time thanks to its ability to be standalone.

Lulua sees herself trying to follow in the footsteps of her mother, Rorona, to become a skilled alchemist, who at this point in the Arland timeline has become well known all over thanks to her alchemic prowess and all that she’s done for the surrounding towns. Whenever Rorona’s name is spoken, there is a sense of honor and respect that everyone mentioning exudes, and when townsfolk speak with Lulua when they find out she’s her daughter, the pressure is very much high when trying to live up to all that she’s done. She’s not alone, however. Lulua is mentored by Piana, who was taught by Rorona herself before she left on an expedition as the alchemists do. One day after Lulua goes exploring with her close friend, Eva, and takes on a task too much to handle before being saved by Piana, a mysterious book suddenly appears over Lulua before dropping right onto her head. Confused, they all go back to the atelier, but strangely Lulua is the only one that can see and decipher text within the book, as the pages are blank to everyone else. She sees this as a calling of sorts, and because of that, as well as the fact that her mother’s atelier license is running out, she decides to set out throughout Arland to uncover the secrets of the book, where it came from, and its true purpose for “choosing” her to wield it. 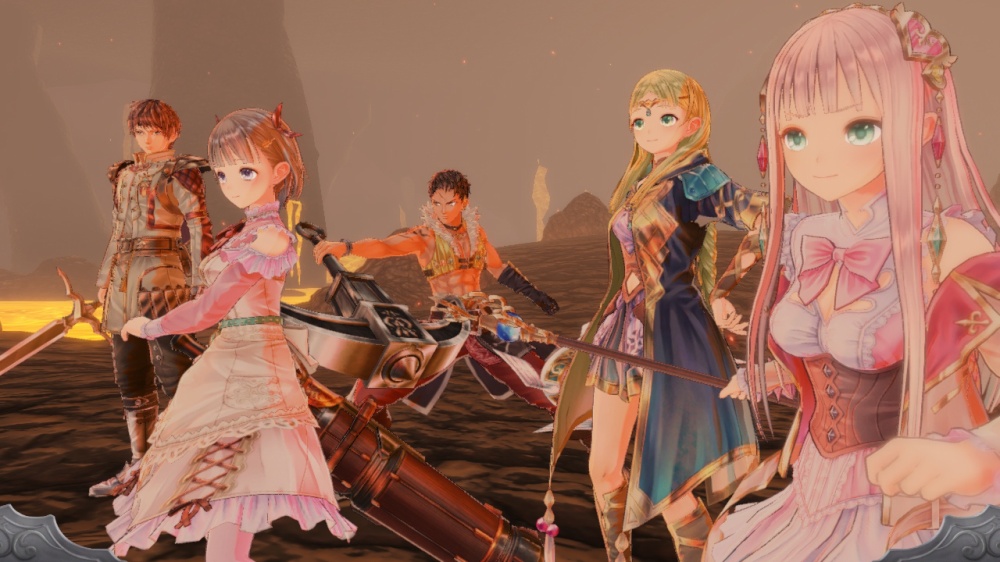 The book is actually a fairly big part of the game and isn’t just a story related item, as you can decipher many new items to synthesize, recipes, and much more through accomplishing tasks that are presented in riddles. You can use keywords to help figure out the hints, and little by little as the page fills up from what you’ve found, you can completely decipher the page to further recover the book. At first I found this tedious as in order to progress through some of the story you’ll have to find the answers to these odd riddles and requests of the book, but as you play you’ll naturally begin to decipher the book little by little. Sometimes they can be simple things like coming across a new material you haven’t seen before in gathering areas and/or slaying a particular monster, but if you’re like me and can’t help but collect every little thing you come across and check every corner of a map while grinding out monsters, the pages of the book will begin to fill themselves without much issue.

Since Atelier games have always had a timed system typically giving the player three in-game years to complete the protagonist’s adventure, it’s probably not wise to spend too much time doing one thing over and over again (like crafting a plethora of healing items that can take three days at a time). However, if you’re familiar with the pacing of Atelier games, you’ll know that three years is usually plenty of time to complete the game so long as you’re managing your time correctly. If this is your first time jumping in, definitely keep that in mind as you explore with Lulua as you’ll inevitably get a bad ending if tasks aren’t completed in time. This happened to me the first time I played Atelier back in 2012 and I was so confused as I never paid much attention to the time, instead assuming that it was just an overworld clock to help the player understand time of day and weather for shopping and scheduling purposes within the game.

While there’s a lot of text for you to uncover within the mysterious book Lulua will have to decipher, there’s also plenty of text for the player to wrap their head around as there’s a lot of dialogue that’s unfortunately lost in translation thanks to localization woes and typos. As the Atelier games are yearly – almost seasonal it feels like, including Atelier Ryza being announced not even a week after Lulua’s western release – you can imagine the rush put into getting the games out globally. Usually there’s not too long of a wait between the Japanese and western releases, but with a lack of English dubbing in the game, it would have been appreciated to see a little more polish put into, at the very least, any spelling and grammatical errors. This isn’t just in spoken text, but some menus, signs, tutorials, and descriptions as well. It’s not anything game breaking by any means, and most of the errors are minute, but pile a bunch of small things together and it’ll grow to a size you can’t ignore after a while. 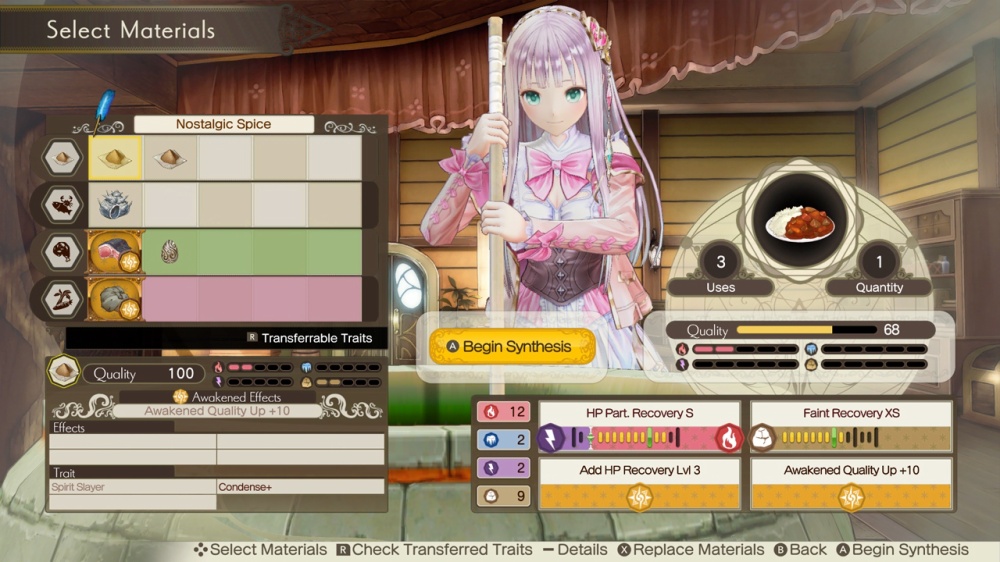 Performance is also something to take into account when handling the Switch version compared to other platforms. Much like Lydie & Suelle, I feel the Switch version of the Atelier games adopt the same method of performance as the older PS Vita titles, made to be compromises for the ability to play on-the-go. The resolution isn’t so much an issue as it is the much lower anti-aliasing, dithering, shading, textures, and a 30 frames per second cap. A turn-based RPG like Atelier doesn’t need a higher frame rate, so keeping it lower is certainly no issue at all and hasn’t affected my time with it by any means. My curiosity sparks from the art direction. As Atelier titles aren’t necessarily graphically demanding, it would have been nicer to see the visuals a bit closer to the PS4 version. I’m hoping with each new entry of Atelier that makes its way to Switch we can see better optimization that gives it true parity with all other available platforms.

Lulua is more than enjoyable given its faults, however, and its charming story and recurring theme of synthesis, exploration, and battle that have helped define the series as a whole remains intact and refreshing all of these years later. Tons of RPGs have crafting elements to help strengthen the player, but the way Atelier does it is so seamless to its core design that it’s something you conduct innately versus feeling pressured to do or penalized for not doing. It makes every material serve a purpose and the world feel more alive with monsters in the overworld as you interact with the environment to help further your adventure and becoming an alchemist you can be proud of. The architecture of the towns, beautifully woven dresses, vistas of the countryside, and personalities of the characters make Atelier Lulua one of the more visually appealing entries to date. It is stunning to see the décor, fashion, and culture as you go from place to place in-game and from entry to entry, with even the darkest of places having a sense of beauty and vibrancy within them.

Atelier Lulua: The Scion of Arland brings back the colorful series in a great way. Lulua is charming and those she meets and travels with like Eva, Aurel, and returning characters such as Piana ensure that you’re going to have a great time going through the game with their funny yet endearing conversations while watching the bonds grow between them. I’ve always said that one of the great things about Atelier is that they’re heartwarming RPGs that genuinely make you feel like you’ve made friends along the way, with touching stories and a perfect blend of role-playing, simulation, and adventure that makes it easily accessible to wide range of players across the globe. While playing Atelier Lulua docked isn’t exactly an eye-catcher despite its unique and ravishing art direction thanks to clear drawbacks compared to other platforms, handheld mode is an absolute joy and runs very well. Those looking for a big RPG experience that may not have the luxury of time on their hands should look towards Atelier Lulua: The Scion of Arland, as these games have always had great pacing that goes along with the player, perfect for long sessions, quick trips, or even just a coffee break or a short time before bed to get your fix of a beautiful world that takes you on a journey just like a book. Meanwhile, fans of the illustrious series can rest assured that Lulua is a much appreciated sequel to the Arland trilogy that revisits life on the countryside many years afterwards, catching up with some of our favorite characters again.

Atelier Lulua: The Scion of Arland review copy provided by Koei Tecmo for the purposes of this review.