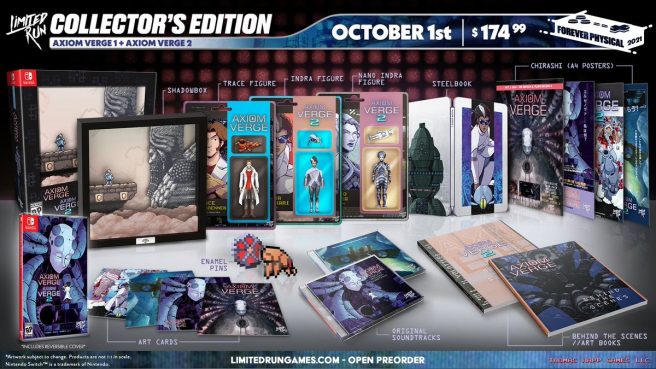 We previously reported that Limited Run Games would be teaming up with Thomas Happ for a physical release of Axiom Verge 2. The company followed up with additional details today.

Aside from Axiom Verge 2 itself, it also looks you’ll be able to pick up the Axiom Verge 1+2 Double Pack, and even some merchandise. Collector’s editions are also planned. You’ll be getting a bunch of goodies here like original soundtracks, art books, art cards, figures, posters, and a steelbook.

Here’s some information about Axiom Verge 2:

You may have played Axiom Verge, or heard it referenced as a benchmark for indie action-exploration games. This long awaited sequel expands on the universe with completely new characters, abilities, and gameplay.

Indra, the billionaire behind the worldwide Globe 3 conglomerate, heads to Antarctica to investigate the disappearance of her daughter, but ultimately finds herself in entirely different reality, infected by parasitic machines that both aid and confound her. Where is she? Who is the mysterious person goading her from the other end of the computer terminal?

Explore an alternate Earth-like world, replete with the ruins of an ancient, high-tech civilization. Hack machines. Battle monsters. Use your remote drone to enter the Breach, a parallel but connected reality that is filled with its own dangers. You’ll want to search every inch for the hidden items and upgrades you need to survive.

Pre-orders for the Axiom Verge 2 physical release and everything else begin on October 1 at 7 AM PT / 10 AM ET / 3 PM in the UK / 4 PM in Europe. Limited Run Games will be taking reservations here.