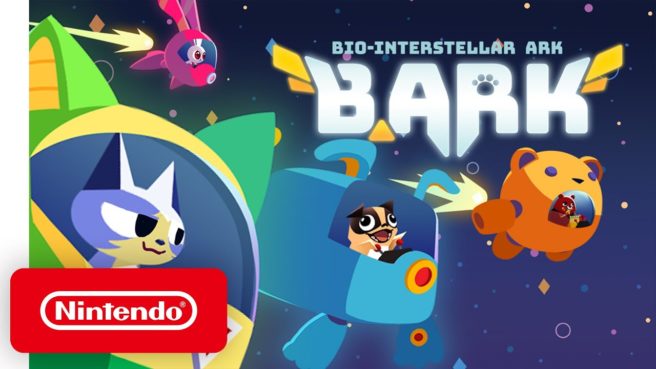 TicToc Games has provided an update on the “interstellar animal adventure cute ’em up” B.ARK. The game will launch in Q4 2020 as a timed Switch exclusive.

Here’s some information about B.ARK plus a new teaser trailer:

Carefully crafted by some of the minds behind Shovel Knight, Contra 4, and A Boy and His Blob, B.ARK feels like a Saturday-morning cartoon for the whole family. When a cybernetic army of sea creatures known as the Dark Tide threatens the universe, humanity’s only hope is Team Bio-Interstellar ARK (B.ARK), an awesome crew of animal pilots!

Assemble for a family game night and join B.ARK’s four furry heroes on their journey to save the Solar System. Barker the Dog, Felicity the Cat, Lucio the Bear, and Marv the Rabbit all possess Super-Duper abilities to help turn the…tide…against the Dark Tide. Barker temporarily turns baddies into goodies while Felicity can double her bullets for extra damage. Create a powerful barrier for the whole team as Lucio, or slow down every on-screen enemy with Marv.

Coordinate with up to four local pilots to activate Super Fusion Combos that can take down even the most powerful revenge-seeking sealife. Though B.ARK soars through space in top-of-the-line ships, their fishy enemies put up quite the fight. When they take too much damage, crew members can attach to friendly ships in Side-Car Mode to stay in the fight. But a bit of friendly competition never hurt anyone — tally the results at the end of levels to see who played best.

Journey through our corner of the Milky Way discovering animated friends and foes while visiting colorful planets. Battle sea creatures like Guppies, Hammerheads, and Crush-taceans piloting powerful mechs. And what sort of cute ‘em up would be complete without tough bosses?

B.ARK invites families and friends to reconnect for a night of fast-paced fun. Charming hand-drawn animation, epic space-faring music that keeps the action lighthearted, and an all-ages setting means anyone can pick up the game, start playing, and start smiling in mere minutes.

B.ARK will cost $9.99 on the Switch eShop upon release.