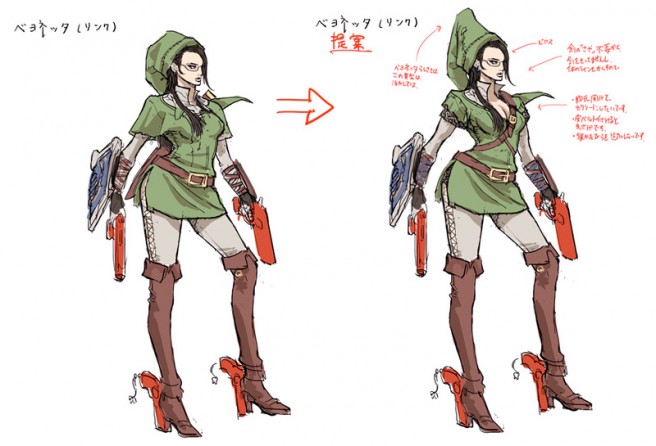 Over in a Japanese PlatinumGames blog post, the studio provides details on the process of bringing the Nintendo costumes to Bayonetta 2. Siliconera translated the information, which we’ve rounded up below.

– Things began when Hideki Kamiya asked the developers at Platinum to design some Princess Peach costumes for Bayonetta
– This was pretty surprising for the designers, as both characters are complete contrasts
– Kamiya felt that the closer they could make it to Peach’s original designs, the better
– They used the same design for Princess Peach’s to make one for Daisy as well, which also comes with a Luigi charm
– Designer is a fan of mecha, so it was the most fun for him designing Samus
– They couldn’t do much change to Link’s costume, which Kamiya was fine with
– Nintendo had to take a final look at things since it’s their characters
– Because of this, the designers at Platinum were careful, and felt that it could be risky to make Link’s outfit look sexy
– This is why they designed it so her chest area would not be as revealing
– Nintendo suggested to have the design show more of her chest
– This really impressed the Platinum designers to hear coming from Nintendo
– After all was said and done, the Platinum Games designers were satisfied with the costume, and felt that they were able to retain some of Bayonetta’s characteristics in it