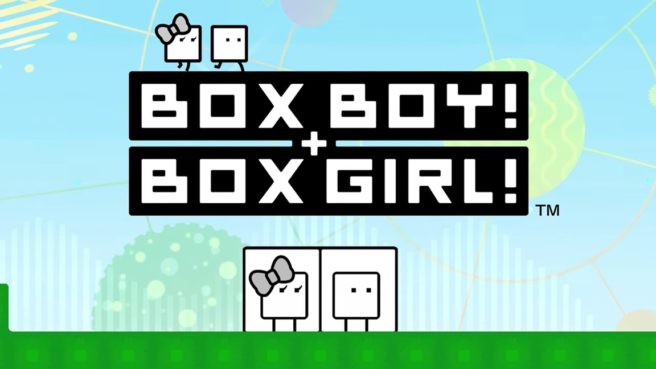 In a recent issue of Famitsu, a BoxBoy! + BoxGirl! interview was published with some of the developers. Producer Yasuhiro Mukae, art director Akiko Horiuchi, director Taku Koinuma, and level design director Yutaka Watanabe had much to say about the first entry in the series for Switch.

During the discussion, the team spoke about why HAL Laboratory brought the series back and made a new entry for Switch. They also touched on the game’s color stages, what lies ahead for the future, and more.

What are the beginnings of BoxBoy!?

Mukae: Around 2013 we were looking for a new in-house game and, regardless of the department, many different staff members sent in their own proposals. At that time, working as a designer, I wanted to come up with my own idea, and that idea was how BoxBoy! was born. After getting approval I worked together with the programmers to create a prototype and used that alongside the proposal. Our plan was taken up within the team and work started on the game. That was also the time I switched from designer to director. When this current game was still in its early stages, I decided I wanted to let someone else have the experience, so I became the producer and Koinuma took over directing.

As the creator of the BoxBoy! series, was there anything in development that you particularly focused on?

Mukae: BoxBoy! is a game about using boxes to solve logic puzzles. For that reason while developing the game I especially wanted to create stages that captured both that logical puzzle element and also a sense of fun. Also, one of the main points for me was to give particular attention to designing various strategic possibilities so that each player would be able to approach the game in a different way depending on their playstyle. In this current game there are missions where the player has to be strategically sparing with their boxes. And because there are many different ways of being economical with those boxes, I think it’s possible to play the game with a trial and error process and then discover all the different patterns, which I think gives this game depth.

I was surprised to hear that there are over 270 different stages! What’s your secret to creating so many?

Watanabe: I think deciding on the theme is very important, and each world and stage has been developed after deciding on that theme. For example, if the theme for the world is ‘using switches’ then the image we have for a level becomes ‘piling up boxes’ to activate them. If no content comes to mind then we try changing the theme and so on… Not overusing the theme just might be as important too!

When you are thinking about releasing a new entry in the series, how do you come up with the specific title and characteristics of the game?

Mukae: With the sequels we try to return to that very first generation BoxBoy! and its simple concept of ‘create boxes to work through the level’. With the first sequel, BoxBoxBoy!, you can use two sets of boxes. In the third game, Bye-Bye BoxBoy!, Qbby has those new special abilities. This time around we have added multiplayer as well as some new abilities. In other words, all of the various gimmicks and differences of the sequels originated from that first game. Then we look at various approaches to expanding the gameplay and create the games from there. It might not be going too far to say that all the sequels were treated as if they were actually BoxBoy! 2.

The third game completed the trilogy, so could you tell us why you decided to make this fourth game?

Koinuma: I think the release of the Switch was a big factor. The previous game offered a conclusion, but with the Switch we are able to bring the game to those who have not had a chance to play the series before and, when we then thought about the sort of things we could accomplish with the special features of the hardware, we decided to start development.

The Nintendo Switch definitely makes it easier for two people to play together. What made you decide to go down the multiplayer route with this game?

Koinuma: To be honest we always thought playing with two people sounded fun and we had the idea of multiplayer right from the first game. When we started developing this current game and thought about how we could make this title distinctive and also use the Switch hardware, we settled on a multiplayer component.

Mukae: At the time of making the first game we had system limitations and we couldn’t overcome those hurdles to make multiplayer a reality. But now with the experience of those working on the series and the release of the Switch, we finally have the capability. We decided it was time to attempt a multiplayer mode.

Ah, I see. So the timing was just right. I also wanted to ask about the story. Is there any connection to the third game?

Koinuma: I wonder… (*mysterious music plays*). To be honest not even we know. Everyone at home, please see for yourselves!

Mukae: Well, Koinuma is in the development team, so he should really know… (laughs) Because the series is one that tells a story without dialogue, whatever the development team think is going on, there is a lot that is left to the interpretation of the player. And this title is no different. Because the story of the single player and multiplayer campaigns differ, I think it’s best if players complete the game totally and see for themselves.

I’ll do that too! (laughs) Though the series is one that has always been in monochrome, in this title there are some stages with elements of color, aren’t there?

Horiuchi: The once peaceful planet of the boxes is being steadily eroded and becoming black and white, so the story is about the boxes trying to return peace to their planet. To show that former peaceful time, we added some really colorful landscapes and scenery to be the exact opposite of that monochrome aesthetic. At the end of the original BoxBoy! the color of the world after peace has been restored is green, so we’re following that color scheme.

For April Fools’ Day there were designs released for a CircleBoy and also a Square Kirby, but are there any plans to release anything officially?

Mukae: The response we got from many people after that was positive, which I was really pleased about. In terms of merchandise, I’m sorry to say that I haven’t heard anything… but if they were being sold I would definitely want to buy them! This is a bit of an aside, but I was thinking quite seriously about the basic layout of a CircleBoy game at the time of creating him. (laughs) At least all that work was worthwhile!

Can you give us a hint as to what is next for the series?

Mukae: At the moment things are just settling down after this current game and we are mainly concerned at the moment with releasing onto the Switch smoothly. After that the team will start discussing what we want to do next. Whether that’s another BoxBoy! or something different… that’s something we haven’t talked about in certain terms, but in order that BoxBoy! remains a series that can be appreciated for a long time I think I’d like it to continue, and I’m happy to be the one overseeing it.

Finally, do you have a message for the fans of the series who will be playing this game?

Koinuma: Those characters you thought you had said goodbye to have cunningly returned! The traditional gameplay of the BoxBoy! series naturally returns, but now with the added multiplayer there are even more challenges stuffed into the game. Please play it to see for yourself!