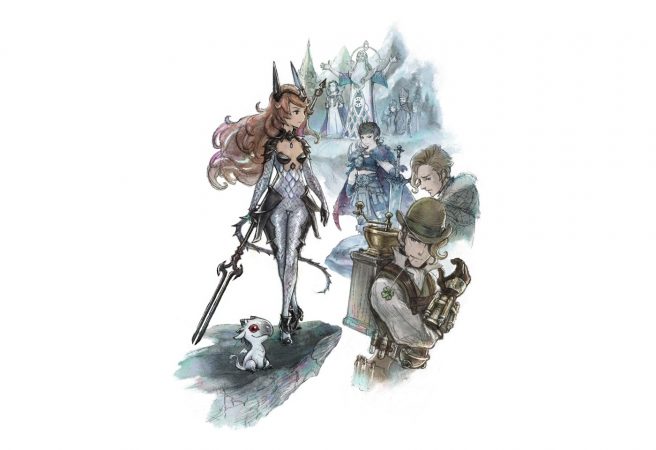 – A religious nation surrounded by snow and ice
– According to legend it was saved by a dragon about 1,000 years ago
– The Church of Rimedahl, which worships the dragon that saved the nation as its Dragon God, is the country’s official religion

– A small, lizard-like creature who suddenly appears in front of Seth and company on their way to Rimedahl
– He speaks human language and insists he is the child of the Dragon God
– He seems to have met Adelle in the past

– Swordmaster Asterisk Holder
– Friar of the Rimedahl Church
– She and Helio, the Inquisitor, locate fairies deceiving humans and interrogate them
– Since her parents were killed by fairies, she continues to hunt fairies for revenge to this very day

– Spiritmaster Asterisk Holder
– A man who became the Inquisitor of the Rimedahl Church after being recognized by Domovoy, the Church’s highest priest
– He uncovers humans disguising themselves as harmful fairies and holds divine trials in the court

– Oracle Asterisk Holder
– The highest priest of the Rimedahl Church
– Has the deep trust of the people
– He claims his words are those of the Dragon God, and that the calming climate of the frigid Rimedahl is proof of their faith

– Salve-Maker Asterisk Holder
– The mayor of Enderno Village near Rimedahl
– He is trying to obtain the moonlit grass to save his younger brother Grin, who fell into a deep sleep in the grief of losing his wife

– Dragoon: Dances on the battlefield with a spear in-hand; specializes in the use of spears; can “Jump” to attack enemies by surprise from the sky
– Swordmaster: Slays enemies with counterattacks; wields a sword using a unique stance and overwhelms enemies with powerful counterattacks and pursuits
– Spiritmaster: master of spirits; support job able to summon spirits; they ward off the dangers of the battlefield with continuous recovery
– Oracle: A mage entrusted with law; job that can manipulate law; can even alter the speed and attributes of its targets
– Salve-Maker: engineer that draws out the power of tools; job that can gain various effects by combining items

– “B ‘n’ D,” a popular card game in the continent of Excillant, is a mini-game where each player lays six cards and vie to occupy territory by having control of more of the game board at the end of the match
– This mini-game is also unlockable now in the “Final Demo” of Bravely Default II by completing the main scenario
– Players can build their deck of six cards, and freely combine “Monster Cards” (occupies territory), “Job Cards” and “Character Cards” (both of which possess additional effects)
– Townspeople with a card mark over there head can be challenged to a game of B ‘n’ D at any time
– You can also spend the points you earn by winning and get cards from the opponent’s deck
– Build a deck of six cards from those in your possession, then start the game
– Each player will lay one card per turn to occupy territory
– If you sandwich opponent-occupied territory, you can steal your opponent’s land. But they can also steal it back
– Job Cards and the like on have special effects that can strengthen or even weaken Monster Cards of a specific race