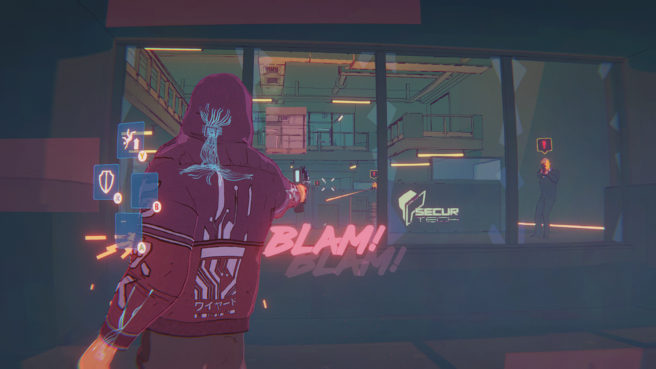 We have the following overview and trailer for Foreclosed:

Foreclosed is a Cyberpunk action-shooter set in a comic book world. Fight against the dehumanized bureaucracy that took your identity. Unleash the power of your implants and fight for your freedom!

Interactive Graphic Novel
Foreclosed combines the interactivity of video games with the visual aesthetic of comic books. Everything from game-play to cinematics are experienced within the stylistic framework of a graphic novel. Full screen and comic panel perspectives are seamlessly blended as you move throughout the city. Onomatopoeia’s, speech balloons, taglines and multiple panels are used to authentically evoke the comic book style.

Original Story
What great comic book doesn’t have a great story? Foreclosed is inspired by some of Antab Studio’s real-life experiences and shows us what happens when one loses their identity. After all, a person’s identity on paper is just a collection of information and numbers. Follow the story of Evan Kapnos, his identity recently Foreclosed, stripped of his job, his brain implants and his access to the city Block-chain, he must now escape the city before his identity and implants are auctioned off.

Hi-Tech Combat
Utilize the weapons and tech you find along the way to fight back against the unknown assailants who chase you through the city. Modify your Symbiotic Pistol with Explosive Rounds or go silent and equip the Stealth Bullets mod. Use superhero-like abilities to fight opponents and manipulate your surroundings with Brain Implant upgrades, use telekinesis and launch your enemies into the air or hurl huge objects at groups. Hack different systems for access and traps or even hack the minds of others with implants.

Non-Stop Interaction
Cutscenes are interactive and transition smoothly to and from alternative game-play styles to allow the player to truly feel like a comic book hero. Freely explore your environments and take in the Cyberpunk world of Foreclosed.

Features Overview
– Slick Cyberpunk Action – Foreclosed blends a striking comic book aesthetic alongside high-octane, cyberpunk infused action gameplay.
– Hi-tech Combat – Modify your Symbiotic Pistol with an assortment of customisations including “Machine-Gun” mode and explosive rounds.
– Firmware Upgrades – Discover and unlock brain implant abilities with an RPG-like skill system
Interactive Comic Book – Everything from gameplay to cinematics are experienced within the stylistic framework of a graphic novel to make you truly feel like a comic book hero.
– Original Story – Follow the story of Evan Kapnos, his identity recently Foreclosed, stripped of his job, brain implants and access to the city Blockchain. He must now escape the city before his identity and implants are auctioned off…