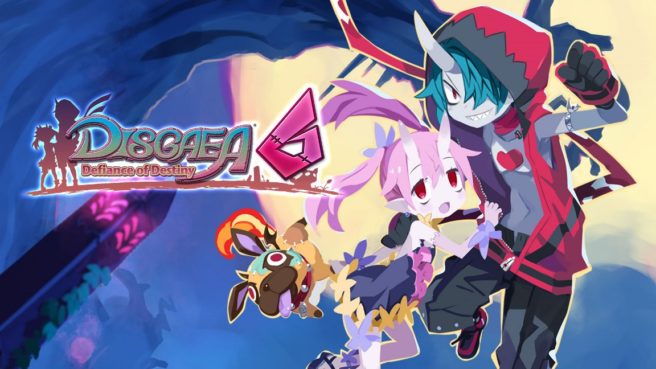 Nippon Ichi Software has published a new round of details and screenshots for Disgaea 6. Today’s update covers the game’s various characters, Special Skills and Evilities, Juice Bar, and D-Merit Points.

– Leader of the Rainbow Squadron Prism Rangers
– Our hero who crossed dimensions
– As the squadron’s first female leader, her goal is to restore their ratings

– “Evilities” are character-specific abilities that remain in effect as long as certain conditions are met
– There are two types of Evilities: “Unique Evilities” that are specific to a character, and “Common Evilities” that can be swapped in and out
– You can equip as many Common Evilities as your maximum cost allows, so swap them in and out according to your play style
– “Special Skills” consist of various skills such as attack and recovery that require you to spend SP in battle
– Special Skills include character-specific skills that can only be used by a specific character, as well as magic that can be used by anyone
– Special Skill Spell Example: “Fire”: The first stage of fire-type magic that can deal damage with the power of fire. Special Skills can be upgraded at the Skill Shop (higher power, less SP cost, etc.), as can the range of magic-only skills
– Common Evility Example: “Fire Body”: Increases fire resistance by 25 percent and strengthens fire-based attacks; this is a low-cost Common Evility that anyone can learn
– Common Evility Example: “Zombie Revival”: Resurrects character on the Base Panel after death; can only be used once per stage; Common Evility that only Zed can learn naturally, but other characters can learn it by creating a Book of Secrets at the Skill Shop
– Can learn and strengthen Special Skills and Evilities at the Skill Shop at the base
– Some Common Abilities can only be learned by specific characters naturally, but other characters can learn those abilities by creating a Book of Secrets at the Skill Shop

– Unique Evility: “Super Reincarnation Qualified”: Increases damage +1 percent for every Super Reincarnation (Maximum 200 percent increase)
– Common Evility: “Zombie Revival”: Resurrects on the Base Panel after death (Can only be used once per stage)
– Special Skill: “Thunder Rush”: A wind-type Special Skill that creates lightning and knocks back the enemy; the knockback effect pushes the attacked enemy back

– Unique Evility: “Magical Girl”: Increases single target attack power by 50 percent when equipped with a staff
– Common Evility: “Lamp of Life”: If you do not have enough SP to use a Special Skill, you can spend HP instead
– Special Skill: “Pretty Spldner”: Magical Girl Magileine arrives to strengthen all stats for three turns

– Unique Evility: “New Money King” – Increases all stats by 5 percent for the total number of digits that make up the money in your possession.
– Common Evility: “King’s Knowledge”: Increases all stats by 2 percent for each unit in the same squad
– Special Skill: “King Cannon”: Special Skill that shoots and smashes gold bars at the enemy; has a long range that can reach distant enemies

– Unique Evility: “Heroine Spirit”: increases damage dealt by ally male characters on the map by 20 percent
– Common Evility: “Magical Step”: Reduces SP cost for Special Skills by 10 percent for each adjacent ally unit
– Special Skill: “Frozen Step” – A water-type special skill in which she attacks the enemy while singing and dancing; can attack multiple spaces in front of you

– Unique Evility: “Hero Knowledge”: Every 1 percent HP reduction increases damage dealt by 2 percent
– Common Evility: “Critical Charge”: Increases critical rate by 5 percent for each space moved on that turn
– Special Skill: “Prism Dynamite”: A Special Skill in which she becomes the five Prism Rangers and bombs the enemy; attacks all enemies in front of you at once

– Unique Evility: “Overlord’s Dominance”: increases damage by 10 percent for each enemy unit on the map below your level
– Common Evility: “Absolute Ruler”: increases all stats by 20 percent for each ally demon unit on the map
– Special Skill: “Negative Burst”: The Overlord’s Special Skill that condenses and explodes despair; can attack several targets a few spaces in front of you

– The “Juice Bar” allows you to distribute experience points and such to allies that did not participate in combat
– Can also distribute “Mana,” which is required to use various base facilities, and “Extract,” which increases stats

– “D-Merit Points” have been added to character stats
– By completing pre-determined objectives, you can obtain Karma and the like to strengthen your character

– Cow-type demon that has a habit of looking down
– While many are timid, they will beat you down if you approach them carelessly
– They have extremely high jumping power and attack with their fists

– A gentleman with a lovely shell
– They overwhelms enemies with their hard shell and power
– Due to their large size, they have high performance and can easily obstruct enemy movements

– The peon demons of the Netherworld. Destined to explode when thrown
– They are sometimes even the protagonist of the game

– A live corpse resurrected from the grave
– They eat the lives of others to acquire vitality
– Their attack and defense power are high, making them strong in an head-to-head fight

– The strongest class of demon in the Netherworld that rules the skies
– It amplifies its power by withstanding attacks
– Due to their large size, they have high performance and can easily obstruct enemy movements

– A beautiful female demon who seduces men
– They play with the hearts of men and weaken them
– They can do pretty much anything, so use them to exploit the enemy’s weakness

– A knight with demonic pride
– Their study armor reduces physical damage
– Due to their large size, they have high performance and can easily obstruct enemy movements

– A demon insect that deceives people
– Their scales accelerate the worsening of symptoms
– They have high mobility, so put them in the vanguard to weaken enemies

Disgaea 6 launches for Switch in Japan on January 28, 2021. The western release is confirmed for Summer 2021.