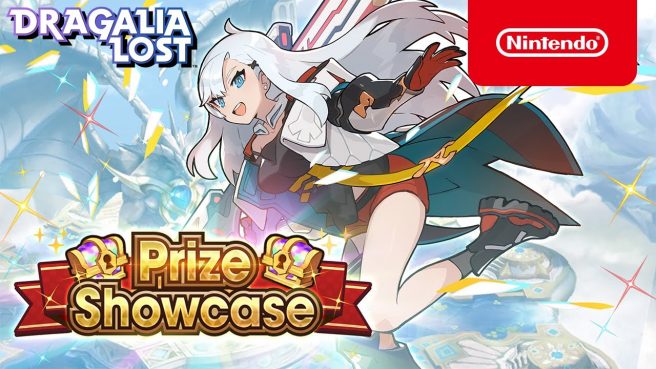 Dragalia Lost will host the Prize Showcase on October 5, Nintendo and Cygames have announced.

Appearance rates for featured adventurers will be boosted during the Prize Showcase!

When you summon on the Prize Showcase, you will get a prize in addition to the adventurer or dragon who appears. There are six categories of prize: platinum prize, gold prize, silver prize, bronze prize, fifth prize, and sixth prize. When you perform a tenfold summon, the tenth prize is guaranteed to be either a platinum, gold, silver, or bronze prize. Prizes will be sent to the No Limit tab of your goodie box.

Note: Unlike tenfold summons, using ten single summon vouchers at once doesn’t guarantee that the tenth prize will be a platinum, gold, silver, or bronze prize.
Note: For a full list of prizes and their appearance rates, tap Summon on the in-game footer menu when the Prize Showcase is active, then see Prizes under Appearance Rates.

Get a closer look at some of the prizes below.

■Platinum Prize
If you receive a platinum prize, you will receive one of the following, based on their appearance rates.
・Sunlight Stone × 1
・Damascus Ingot × 1
・Adamantite Ingot × 1

■Gold Prize
If you receive a gold prize, you will receive one of the following, based on their appearance rates.
・Sunlight Ore × 3
・Champion’s Testament × 2
・Golden Key × 2
・Twinkling Sand × 7

Here’s a trailer for the upcoming event:

Even more information can be found on the official page here.