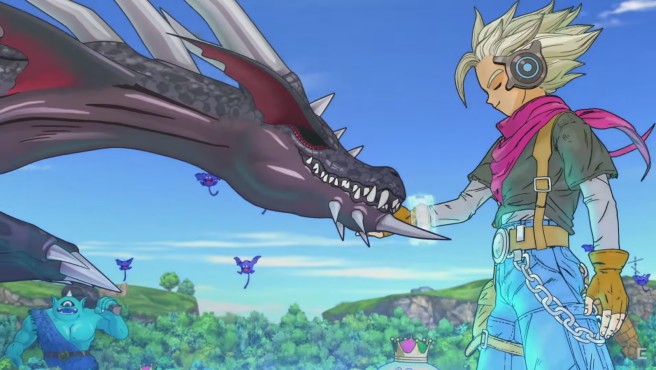 As Dragon Quest Monsters: Joker 3 launches in Japan, Famitsu sat down with producer Taichi Inuzuka for an interview. We have a summary as to what Inuzuka shared with the magazine this week.

Dragon Quest Monsters: Joker 3 features a world that is sort of like science fiction. At first, the staff made the plot together with Takeshi Uchikawa (who is currently directing Dragon Quest XI). The suggestion was to make the theme become something catchy. As a result, science fiction came into play.

Yuji Horii didn’t mind this world theme. His stance was that “anything’s alright as long as it’s interesting”. But since it’s science fiction, there would be some unfamiliar worlds, so they needed to make it so that people who aren’t getting used to the genre can easily understand, too.

The new Reactor device in this game covers all of the gimmick features. Having more gimmicks will make it look more like science fiction, but it might end up confusing some players instead. As a result, all of the things that occur on the field can be solved with the Reactor.

One big hook in Dragon Quest Monsters: Joker 3 is the ability to ride monsters. Because the aim was to make all monsters rideable, the developers encountered some issues in determining how to make this work with some of the monsters. In the end though, they managed to make it happen. Not only the wild monsters, but Inuzuka also implies that Break Monsters that are important in the story can be scouted as well.

The demo published on the Japanese eShop a few weeks back offered land, sea, and air rides at once. But in the full version, it will start only with monsters that players can ride on land. As the story progresses, users will unlock sea, air, and multi-jump land rising in that order. Inuzuka also teases a “Big Air ride” in the end. Also, by clearing the story, features will be unlocked that further modify monsters such as giving them abilities and changing their sizes.

Inuzuka won’t give any tips on how to play through the game. This is because the Dragon Quest Monsters games are about playing freely. All he has to say is, “Please enjoy playing the way you like, including some extreme ways to play.”

Other random tidbits from the interview:

– They added accessories as a new way to strengthen monsters here, but the basis that monster strength is mainly determined from raising and combining them remains unchanged, so the team had to work hard to balance it out.

– This time they added more offense-related content in the form of new spells and skills. New water-type spells are especially considered for newcomers since there were no water spells in previous games. Series veterans are just going to be glad there are more spells added to add to their strategy repertoire.

– The new skills added mostly have an impact, including how they are performed. Other than that, they also enable more detailed adjustments in versus, adding more strategic features such as ‘a place where attack power of players on it will gradually decrease’.

– One of the items that can be bought with Communication Coins has the same effect with “Key of Encounters” from previous games, where players can recruit monsters a bit more easily they’ve befriended before. However, since Communication Coins can only be obtained from multiplayer battles, it’s completely optional, and people who still do StreetPass but don’t want to do multiplayer battles can still get them by combining monsters.

– DLC monsters are planned to be added regularly post-release until around Golden Week (April 29 – May 5).

– A national tournament is also planned for the game; the schedule will be announced at a later date.

– There will be a carryover feature from Dragon Quest Monsters 2 on 3DS to this title. After the ending, players can bring up to 10 monsters which are ranked A or below from DQM2 to DQMJ3 each day.