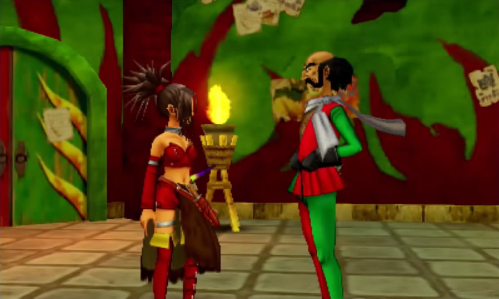 Earlier today, we posted a video from V-Jump that showcased new footage from the 3DS version of Dragon Quest VIII. Siliconera has now translated some of the information that was shared. Read on below for new details about Morrie and Red along with a few other tidbits.

– Morrie’s job class would be something like an evolved mix of the Martial Artist and Minstrel in Dragon Quest IX
– Red is considered an advanced class version of the Thief
– Morrie can use different healing and support spells
– Also has a special ability with his name in it, but it’s still a secret
– Red can heal as well and has some status effect spells
– Stereoscopic 3D works while looking at the characters in the menu
– Morrie can use claws, boomerangs, and blunt weapons
– Red uses fans, whips, and short swords
– Morrie has a funny way of walking
– He can use the “Tiger Claw” weapon, which was seen in Dragon Quest X
– In the original Dragon Quest VIII, you always had to spend all of your skill points obtained after leveling up, but this time you’ll get to save them for when you’d like to use it next time
– Normal and fast battle speed options
– Fast option increases the battle speed by x1.5
– Red also has the “Steal” ability
– This can be used in battle to steal items and Gold from the monsters
– Morrie will have access to his “Call Team” ability, which is actually voiced in the game