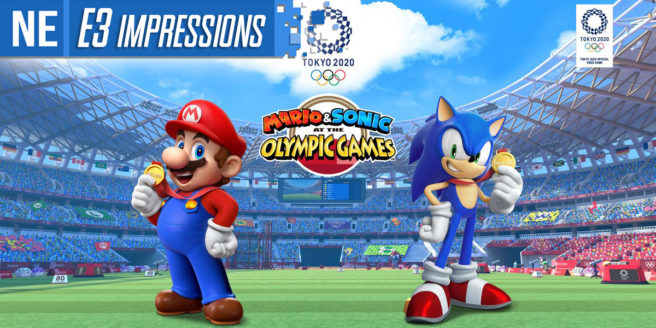 At E3 2019, SEGA kindly invited us to their booth for some personal time with their line-up of offerings. In part five of this series, I’ll be taking a retrospective look at my experience with a new entry in a game series that still blows my mind that it even exists: Mario & Sonic at the Olympic Games Tokyo 2020.

You can hear me chatting about all things Nintendo (and more) on our weekly podcast, available on iTunes, Spotify, and many other platforms.

For detailed impressions of Mario & Sonic at the Olympic Games Tokyo 2020, check below the break.

I’ll start off prefacing this article by admitting that I am not a Mario & Sonic at the Olympic Games veteran. With that said, I’ll be giving impressions from the mindset of a newbie.

SEGA’s E3 booth had a full Olympic running track theme set up with demo stations all over in celebration of their new Tokyo 2020 title. The rep demoing my booth joined in to play cooperatively with me; Mario & Sonic games shine best when played with others, so I was glad he was so gung-ho. We played in docked mode, split screen, each with one Joy-Con, and we ran through the three games that are new to this entry in the series: karate, surfing and skateboarding.

After seeing Princess Peach obliterate Tails with a roundhouse kick in the Nintendo Direct earlier in the day, I knew I had to start my session off with karate. I can’t recall for sure, but I think there were optional motion controls for this mode. I decided to go with the sideways Joy-Con and traditional button inputs, though. The SEGA rep warned me that this game is pretty “complicated” and “complex”, in his words. But I brushed the warning off – I mean, I play video games all the time. A family-friendly game like this is a cinch… Or so I thought.

Karate in Mario & Sonic was basically its own Bushido Blade style fighting game. There’s spacing, back dashing, charging your super – every move needed to be deliberate and calculated. Battles were short since as soon as one player was felled, the round was up. So I had a hard time learning from my mistakes, and my demo partner wasn’t going easy on me either. During my very brief time, I had no grasp of the controls. I’m sure karate will be fun for those who play it multiple times, but if the controller gets passed over to someone who just wants to play some Mario & Sonic for the casual party atmosphere… this isn’t it, fam. It’s strange because I find it a bit at odds with what Mario & Sonic is at its core: a party game.

Visually, it looked great. And not just karate – that can be said for the game as a whole. Animations for the characters were precise and hilarious. We’ve seen many of these characters punching and kicking in other games like Smash Bros. already, but all of the character’’ animations in karate were very realistic and human-like. It gave off an intentionally comical and uncanny look to characters like Eggman and Bowser in particular. I find that those little quirks have always been a big part of the charm of this series. 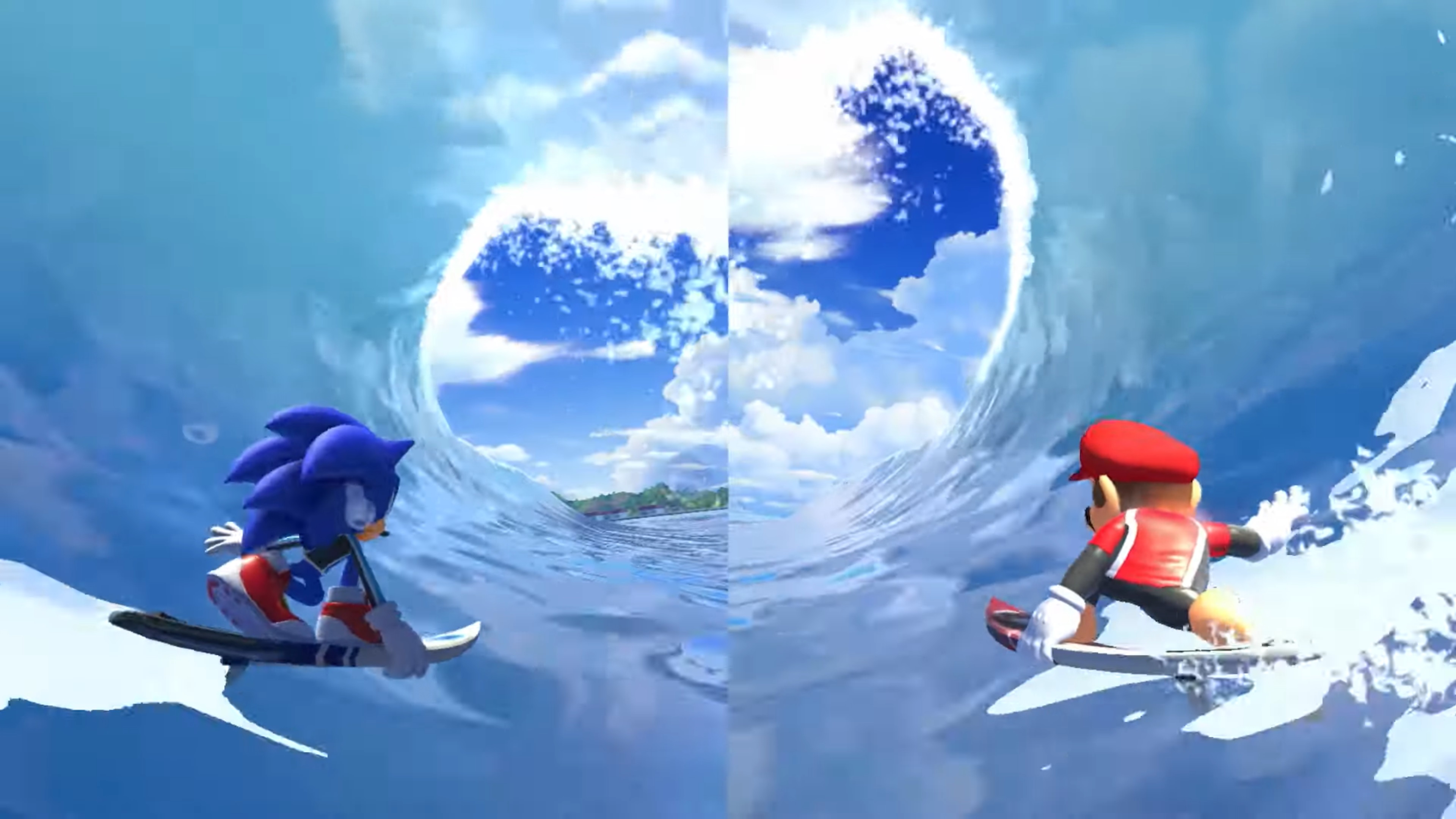 After a swift beat down, I was ready to relax with some surfing. This time I decided to try out the motion controls. Typically, I’m not much of a fan outside of things like gyro aiming and pointer aiming in some games, but I tried to go diverse so I could get a variety of impressions for our lovely readers. Now, I have never surfed before, so perhaps that lack of basic knowledge on how to catch a wave worked against me, but I found the motion controls to be cumbersome. There is a caveat: later on in the session with SEGA , my Joy-Con were malfunctioning. So it could be that they were malfunctioning at this point, as well (more on that in the archery segment). Considering I may have had faulty controls, I can’t judge this mini-game fairly. Visually, again, it was quite stunning. Waves were extremely well animated with all the small “mini-waves” that felt like they were trying to jump out of the main wave and become their own – if that makes sense. (I believe in you, little guy. You’ll be a big wave one day.) The cartoonish splash of white for the bubbles was a nice touch that helped me judge where I was in regards to height on the wave. There was also a great sense of depth when the huge waves started coming at me. I felt like I was riding through a torrent of water in a desperate attempt to seize the opportunity to do tricks and gain points. It was all very exhilarating. I’d be very interested to try this mode with a solid pair of headphones on.

Next up was Mario Hawk Pro Skater 3 – I mean skateboarding. I decided to go back to sideways Joy-Con with buttons, and I’m glad I did. This was by far the best mode. There was jump timing to pull off on ramps, balancing a good rail grind for big number points, and a super trick to perform once I built up my meter. I noticed that when playing co-op, despite being on the same course layout at the same time, I was not in the same space with my rival demo rep (yes, he was now my rival). It was quite a shame, as I would’ve loved to kick flip my board into Eggman’s weird body. The camera auto-focused and adjusted when in this mode, so I never had to worry about a poor camera angle or not being able to see what was coming ahead. Skateboarding had a great balance of controls that were easy to pick up and execute tricks, but difficult to land the high scoring ones which is key to victory. And once again, this mini-game was also a joy to look at. There were a ton of vibrant colors and some smooth, real-time lighting.

Sadly, my session then fizzled out as I attempted to try out archery with motion controls. I started the mini-game up, drew my bow, took aim… and it was immediately clear that things were not steady with Sonic’s weeble-wobble arms. My poor SEGA rep started to worry and apologized profusely to me, but I laughed it off and assured him it was fine, “It’s cool! The game’s still in development, right?”.

What most impressed me with Mario & Sonic at the Olympic Games Tokyo 2020 was the presentation: music and sound effects were bombastic, everything was colorful and exciting, and characters moved smoothly and with personality. The game also held up nicely in the performance department. With all of the effects and action on screen, I didn’t notice the frame rate dropping despite playing in two-player split screen. Visual flair needs to be there for a party game like this, and SEGA has really nailed the look. As for the feel, I had a mixed experience. I did have some malfunctioning Joy-Con, which isn’t factored into my impressions, but I am a bit concerned with how they’ve implemented some games like karate into the experience that is Mario & Sonic. It definitely beckons a second or third play to begin getting the grasp of it, but that alone may be a poor fit for the genre that this game is. Time will tell. Until then I’ll keep wondering what that secret pixel mode was that they teased.