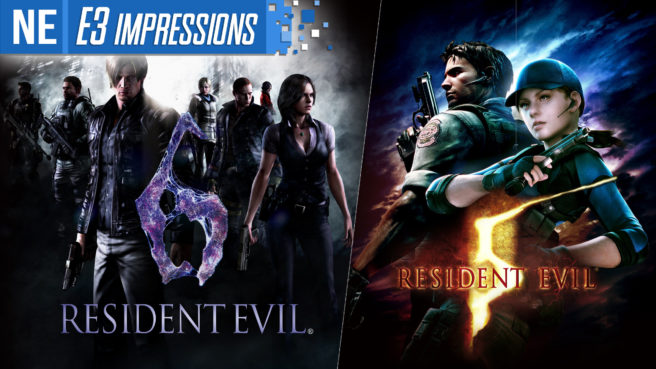 At E3 2019, Capcom kindly invited us to their booth for some behind-closed-doors gameplay demos of their upcoming Switch releases. In part six of this series, I’ll be taking a retrospective look at my experience with Resident Evil 5 and Resident Evil 6.

You can hear me chatting about all things gaming (and more) on our weekly podcast, available on iTunes, Spotify, and many other platforms.

Sitting down to play Resident Evil 5 for the first time in probably eight years was very nostalgic. I remember playing the online co-op often with my podcast partner, Galen, to unlock a bunch of the trophies. With heaps of experience under my belt, I can confidently say that Resident Evil 5 on Switch felt the same as it always has. The frame rate was pretty solid, and I only noticed the occasional dip – nothing that affected gameplay. The controls felt a bit antiquated in that I couldn’t move and shoot at the same time. This was a gameplay mechanic left over from when the series was truly survival horror instead of an action game set against a horror backdrop, at best. Even when Resident Evil 5 first released, I recall this mechanic (or limitation) was criticized for being at odds with the action-orientated direction the series was heading in. Considering more than 10 years have passed since this game’s initial release (that’s gonna be a solid yikes from me), and we have games nowadays like Resident Evil 2 Remake and Revelations 2 where we can move and shoot, and it feels really good… I’m not sure how well Resident Evil 5 holds up unless the player can separate themselves from modern mentalities. One issue I did notice when I was holding off enemies at a choke point as Sheva: instead of having enemies come from around a corner, like I remember them back on the PS3, they were popping in suddenly, which I found jarring. I don’t ever recall that happening on the PS3, but the game still is in development, so hopefully it’s just a matter of optimization.

Resident Evil 6 started me off in Chris and Pierce’s campaign, which I found to be the absolute worst of the three back when I played the game originally on Xbox 360. A consolation to that, the game let me choose costumes for my characters right from the start. Being a fan of tattoos, I had to go with Chris’s yukata slung off one shoulder revealing the non-canon Japanese waves and cherry blossoms tattoo. I kept Pierce as is because his ridiculous scarf is already the most absurd thing to wear in a firefight. Geared up in dumb clothes I was ready to hit the town, except the town was crawling with monsters wielding guns. Visually, the game held up in its environments and lighting, but some of the character animations felt quite dated. The frame rate on Resident Evil 5 was a little rougher compared to its predecessor, but it wasn’t too noticeable. It felt similar to the Switch port of Revelations 2 where the frame rate was uncapped – a confusing choice. I’d much rather a 30 FPS cap. I noticed what felt like the frame rate going up into the 50s, then down to the 30s occasionally, but it is important to note that this was a very action-heavy demo segment. So we can certainly benchmark this as a decent stress test. I noticed something that I can’t recall the original having, and that was a translucent blood splatter effect on my character’s screen when I got hit. Hopefully there’s an option to turn this off in the settings. Having just tried out Resident Evil 5, it was immediately apparent to me that Resident Evil 6 was not as stiff as its predecessor… However, that was not a good thing for me. I felt like I was equal parts sluggish and slippery – did I really play through this whole game back then? Characters’ movements felt like they were designed and implemented without any consideration for how the camera operates in the game. Moving my character around just felt bad.

Both games felt pretty standard. These ports are the titles that they’ve always been, which I guess is what one would hope for in a port. I do have to say that both of these games shine with co-op play; there are a lot of elaborate set pieces throughout every campaign that feel unique and over-the-top. So, if you have a friend who’s into third-person shooters with completely outrageous premises that take themselves too seriously, both Resident Evil 5 and 6 will probably be a good time for you.