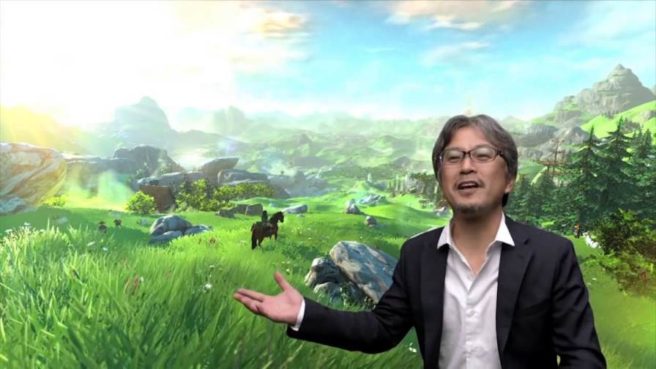 Eurogamer recently had the chance to interview Eiji Aonuma and ask him about Breath of the Wild and The Legend of Zelda in general. Make sure to read the full interview here; below are a couple of interesting tidbits:

On how Skyward Sword influenced Breath of the Wild and on when development on the Switch version started:

“In terms of the development of Breath of the Wild, I started thinking about it after Skyward Sword was finished.

With Skyward Sword, the way the game world was set out, the areas a player could explore were actually reasonably limited – you would land from the sky into an area, and then explore that area, but the areas themselves weren’t really connected. A lot of people who played the game said to me that they wished they were able to explore the areas between the areas, the gaps between the areas. So that idea of having a large open connected world was in my mind as soon as Skyward Sword was finished, really. And then the Wii U hardware made realising that idea a possibility.

Of course, to actually create that huge open world which you could seamlessly explore, we needed to develop a system for creating that. And actually, just developing the system and tools to create the world, took about a year.

On how the Sheikah Slate resembles the Wii U Gamepad:

“Yes, initially that’s true – we kind of pictured the Sheikah Slate as being reminiscent of a Wii U GamePad, but also to be honest with you I think the Sheikah Slate’s size and appearance resembles a Nintendo Switch quite strongly. So we think that comparison works for both versions of the game, and we’re happy with it.

And the fact we didn’t have to change the appearance of the Sheikah Slate in game… we were very grateful for that.”

On issues with the game’s physics engine during development

“Another example of a challenge we faced was the physics engine. We wanted a consistent physics engine throughout the world that worked in a logical and realistic way. Actually implementing that was sometimes more complicated than it seemed. [For example], one day I picked up the latest build of the game and went to an area, and saw that all the objects that were supposed to be in that area weren’t there. I was quite surprised and confused, and I realised after asking the programmer, the reason the objects weren’t there was because the wind in-game had blown them all away.

That’s the kind of challenge we faced, making the physics engine realistic, but not to the extent that it would negatively impact things – striking a balance between realism and having it work within the game world.

I really think the implementation of this physics engine is a major development for the Zelda series. The way the physics engine underpins everything in the world really offers up a lot of new possibilities. For instance, in Breath of the Wild you might have a puzzle where making use of the physics, there’ll be various ways you can solve that puzzle. That really opens up a lot of possibilities so there’s not just one way to progress in the game or just one way to solve a puzzle.”

More: Eiji Aonuma, interview, The Legend of Zelda: Breath of the Wild